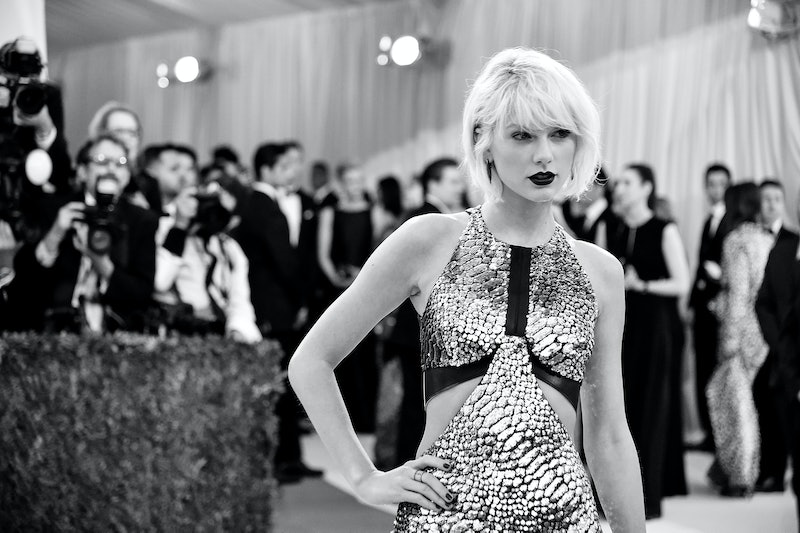 Ah yes, the time has come for a new Taylor Swift revenge single. Opinions on "Look What You Made Me Do" are varied, as are thoughts on Taylor's 15-second teaser for the single. But here's one cold hard fact: Taylor Swift's new dark lipstick look has Twitter ablaze.

The singer wore a dark shade for the album cover, and a deep oxblood for the new "Look What You Made Me Do" teaser trailer. Both are a pretty major departure from her signature retro red, signaling a shift in Swift's image.

But the star's new lipstick look is pretty much as divisive as her new single. Half of Twitter seems to be rolling their collective eyes at Swift's new Hot Topic lipstick phase, while the other half is running out to the aforementioned Hot Topic stock up on the stuff.

Here's what the fans have to say about the bold beauty move.

Some Teased Taylor For Her New Look...

"The old Taylor can't come to the phone right now. Why? Because she's dead."

... Though Many Are Here For The Makeover

With all the snake emojis flying around, Taylor should take that Chamber of Secrets tweet and run with it.

Some Called Out The Look For Its Hot Topic Leanings...

To be fair though, who didn't go through a brief phase where they thought Hot Topic was cool?

While Others Love The Goth Makeover

Some Fans Want A Makeup Line

The old Taylor would have done well partnering with a cutesy brand, like Too Faced or Benefit. The new Taylor, though? Kat Von D all the way.