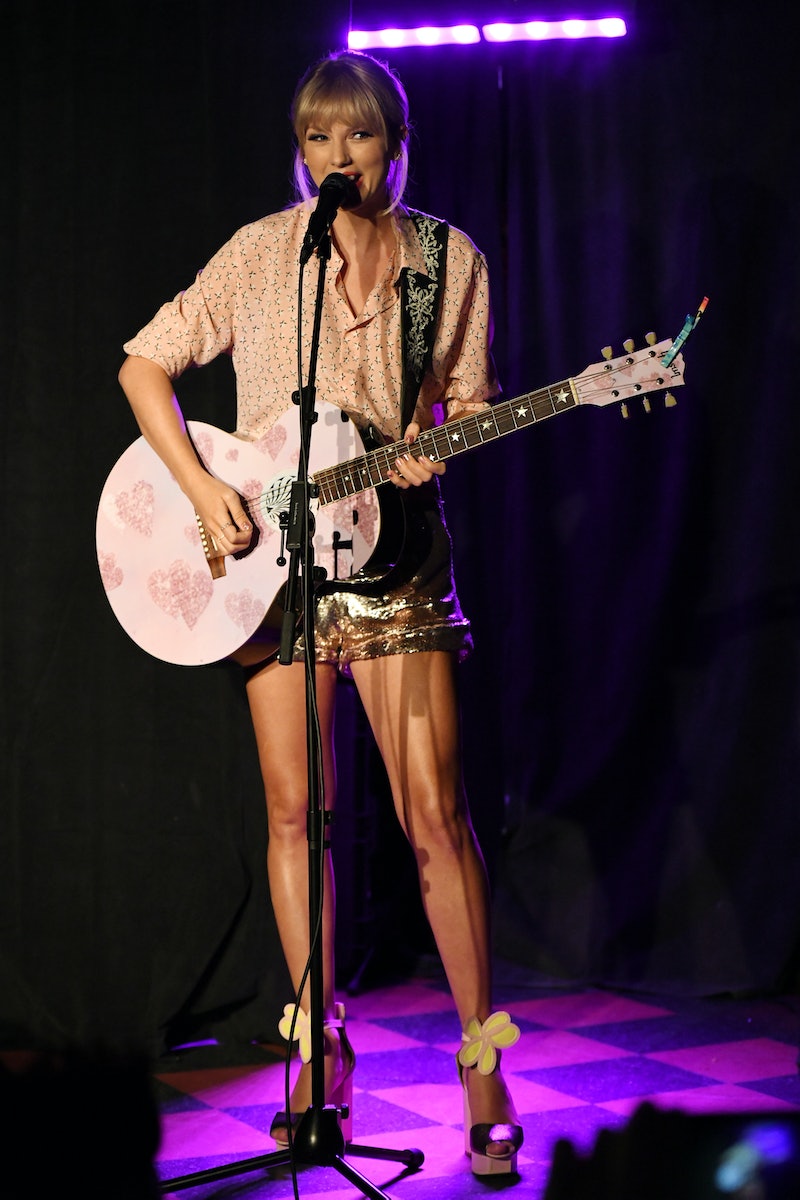 Listeners have probably cried to Taylor Swift’s new song “The Archer” many times over already, but what they may not know is that the track actually carries an important hidden meaning. When "The Archer" was released on Tuesday, July 23, it was revealed to be the fifth track on her upcoming album Lover, and for Swifties, this was a sign that the song would be a heartbreaker. On each of her albums, the singer tends to put a song that’s especially emotional and heartbreaking as the fifth track, like "All Too Well" and "Delicate." Needless to say, the tracks usually become fan favorites, and "The Archer" is sure to continue that tradition, making it a fitting addition to Swift's Track 5 canon.

During her Instagram Live session on Tuesday announcing the new song, Swift explained the Track 5 phenomenon for those who may not know. She revealed that, while it started out as a coincidence, the fan response inspired her to purposefully start putting emotional songs as the fifth track on her albums.

“I didn’t realize I was doing this, but as I was making albums, I guess I was just kind of putting a very vulnerable, personal, honest, emotional song as Track 5,” she said. “So because you noticed this, I kind of started to put the songs that were really honest, emotional, vulnerable, and personal as track five, so that has definitely happened in the case of Track 5 on this album, Lover.”

To say that "The Archer" is emotional would be an understatement. Written solely by Swift, the song reflects on her past relationships and examines her role in how they ended. Much like previous Track 5's, it features many lyrics that paint a vivid picture of the singer's emotions and insecurities. (Fans on Twitter especially picked up on relatable lines like "I never grew up, it's getting so old" and "All of my enemies started out friends.")

In fact, the track resonated so intensely, it reminded Swifties of another Track 5 — Red's "All Too Well." Released in 2012, "All Too Well" tells the story of an all-consuming relationship and its devastating break-up with so much detail ("dancing in the kitchen in the refrigerator light") that the listener feels like they were the other half of that romance. It just might be the collective Swiftie favorite, considering how "All Too Well" was trending on Twitter on the same day that "The Archer" was released. But that wasn't the only Track 5 fans connected to "The Archer."

On her new track, Swift sings about her flaws come to the surface and threaten to ruin the relationship she cares about most. It's a fear she forecasted in "Delicate," Track 5 on Reputation that explored her fear that public perception could ruin love that's too valuable for her to lose. Elsewhere in "The Archer," her fairy tale fantasy comes crumbling down around her ("All the king's horses and all the king's men couldn't put me together again"), much like Fearless' Track 5 "White Horse." And she lets the listener in on her deepest regrets, fears, and frustrations about love, just like previous Track 5's, 1989's "All You Had To Do Was Stay" and Speak Now's "Dear John."

In keeping with the Track 5 tradition, "The Archer" is especially raw and vulnerable in multiple ways, and fans are loving it. Not only that, but, as one fan, @drUnkONTaYtAy, pointed out on Twitter, they're already searching through the song for Easter eggs that connect "The Archer" to "Delicate." It's also made Swifties cry — a lot.

If fans are correct, and "The Archer" really does have a strong connection to "Delicate," then it's possible Swift is starting a new Track 5 tradition. As long as Swift keeps on giving fans deeply vulnerable content, something tells me they won't be too upset.

More like this
Everything To Know About Taylor Swift’s 10th Studio Album, 'Midnights'
By Grace Wehniainen and Jake Viswanath
There's A Taylor Swift Easter Egg In Ryan Reynolds' 'Deadpool 3' Teaser
By Marina Watts
Everything You Need To Know About ‘Black Panther: Wakanda Forever’
By Bustle Editors
Christian Bale Sang With Taylor Swift & His Daughter Can't Believe It
By Radhika Menon
Get Even More From Bustle — Sign Up For The Newsletter