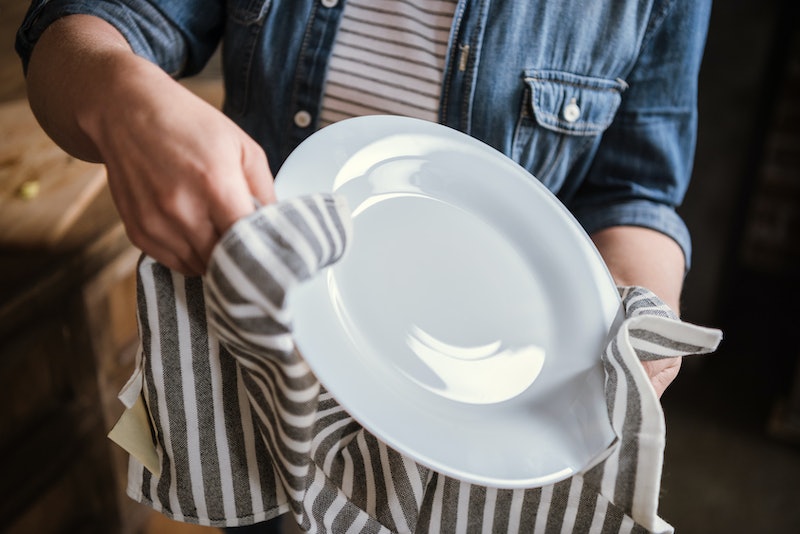 When's the last time you washed your kitchen towels? It usually doesn't rank high on a chore list, especially since they're just going to get dirty anyway, but your kitchen linens are extremely susceptible to germ buildup, according to a new study. There's no easy way to break the news to you, so I'll just get right to it: Your dish towels are disgusting, and they probably have fecal contamination. Tea towels can cause food poisoning, but there's more to the story. Yes, there are poop particles in your kitchen, but it doesn't mean that you'll definitely get sick.

The American Society for Microbiology shared a press release about the study, which was conducted by researchers at the University of Mauritius. Researchers analyzed 100 towels that had been used for 30 days. About half of the kitchen towels showed bacterial growth, and homes with children or extended family members had more germs. The study points out that we often use dish towels for a range of things — drying our hands and dishes, picking up hot dishes, wiping down our counters — and it all adds up. Thirty-six percent of the towels tested positive for E. Coli, and another 36 percent tested positive for Enterococcus, which is usually associated with urinary tract infections. Worst of all, nearly 15 percent tested positive for S. aureus, which is usually associated with food poisoning.

E. Coli can also cause sickness, but it's usually referenced when we're talking about poop. Essentially, people probably aren't washing their hands very well before they decide to wash dishes, which leads to inadvertently spreading germs all over the kitchen. You're also facing higher risk if you're not a vegetarian, according to the study results. Meat-eating families were more likely to have bacteria-filled tea towels.

Study lead author Dr. Susheela D. Biranjia-Hurdoyal says in the press release that the study shows that hygiene in the kitchen has real-world implications. "We also found that diet, type of use and moist kitchen towels could be very important in promoting the growth of potential pathogens responsible for food poisoning,” says Biranjia-Hurdoyal, a health sciences lecturer at the University of Mauritius.

Popular Science says, however, that we shouldn't panic just yet — even though the bacteria collected from the towels isn't stuff you necessarily want in your home, we're surrounded by bacteria in our day-to-day lives, and we're able to stay relatively healthy. Additionally, half of the towels studied didn't have any bacteria, so there's a chance your home is one of the really clean ones. But if you don't have great kitchen habits, this study is a reminder to clean up on a regular basis.

The American Society for Microbiology recommends getting rid of multipurpose dish towels. Instead of using one towel for everything, use separate towels for cleaning, drying hands, and cooking. You should also make sure your dish towels are dry after you're done in the kitchen, because damp towels are a breeding ground for bacteria.

Additionally, if you eat meat and cook it in the kitchen, you need to make sure you're washing your dish towels on a regular basis. HuffPost reports that you should wash dish towels after each use, although that is probably not a realistic goal for most of us. HuffPost says you can also clean them with a diluted bleach solution if you don't want to do laundry every day. At minimum, towels need to be washed every week.

Food poisoning by tea towel sounds pretty silly, but if you've ever suffered from food poisoning, you know that it can be pretty much the worst, and you'll want to do anything possible to avoid it. If you stay vigilant about the towels in your kitchen, you shouldn't have anything to worry about.