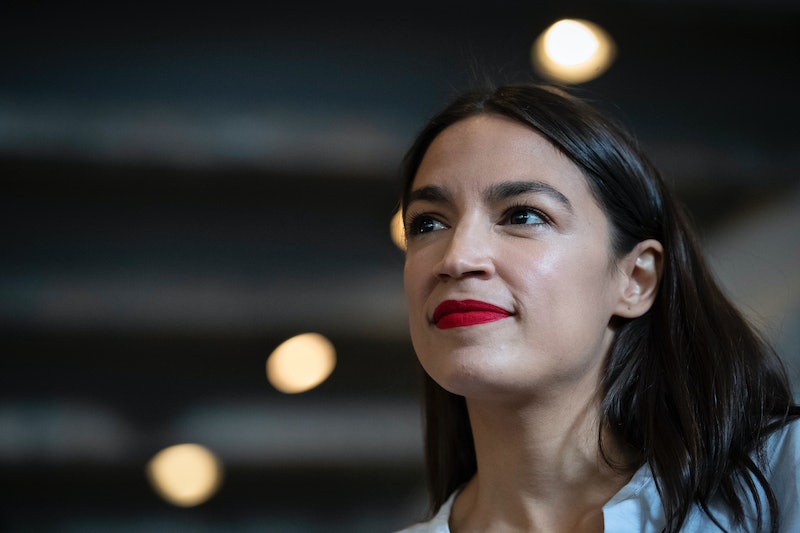 An unlikely political duo may soon be adding another policy issue to their legislative agenda. Ted Cruz wants Alexandria Ocasio-Cortez to work with him on a bill to make birth control available without a prescription in the United States. If the congresswoman agrees to Cruz's proposal, this would mark the second piece of legislation on which the conservative Republican and progressive Democrat have agreed to work together.

Cruz's proposal came after Ocasio-Cortez shared a tweet on June 7 that read, "Psst! Birth control should be over-the-counter, pass it on." She also added in a follow-up tweet, "(It should be free, too - like in the UK!)." On Wednesday, the senator responded to the congresswoman's tweet with a suggestion, writing:

I agree. Perhaps, in addition to the legislation we are already working on together to ban Members of Congress from becoming lobbyists, we can team up here as well. A simple, clean bill making birth control available over the counter. Interested?

Ocasio-Cortez has not yet responded to Cruz's tweet, which he wrote at around 11 a.m. ET today. However, she has previously agreed to work on a bipartisan bill with the Republican senator. At the end of May, the duo decided to collectively take up legislation to prohibit politicians from becoming paid lobbyists after they had an exchange about the issue on Twitter, the BBC reported.

The exchange resulted after Ocasio-Cortez took to social media to comment on a tweet from Public Citizen revealing that almost 60 percent of former members of the last session of Congress are now engaging in paid work — lobbying or otherwise — that influences governmental policy. In commenting on the tweet, the congresswoman wrote, " ... I don’t think it should be legal at ALL to become a corporate lobbyist if you’ve served in Congress. At minimum there should be a long wait period."

In response to the congresswoman's comments, Cruz similarly suggested working together to tackle the issue. "Here’s something I don’t say often: on this point, I AGREE with @AOC," he wrote. "Indeed, I have long called for a LIFETIME BAN on former Members of Congress becoming lobbyists. The Swamp would hate it, but perhaps a chance for some bipartisan cooperation?"

Ocasio-Cortez cautiously but enthusiastically replied to Cruz's proposal at the time. "@tedcruz if you’re serious about a clean bill, then I’m down," she wrote. "If we can agree on a bill with no partisan snuck-in clauses, no poison pills, etc - just a straight, clean ban on members of Congress becoming paid lobbyists - then I’ll co-lead the bill with you." Cruz readily agreed to the congresswoman's conditions.

During an interview on The Young Turks on June 6, Ocasio-Cortez indicated that her legislative team is currently in the process of working on the legislation with the senator's team — and she's "looking forward" to seeing how things progress. " ... We're trying to figure out in this collaboration is how far he's willing to go," Ocasio-Cortez said about Cruz, the outlet noted. "Is this just about the letter of the law or is he serious about really banning lobbying in spirit? And so I'm really looking forward to seeing where and how far they'd be willing to move on that, but I'm encouraged."

It remains to be seen whether the congresswoman and senator's respective staff members will soon be engaging in similar work on over-the-counter birth control legislation as well. For many, including Ocasio-Cortez and Cruz themselves, their current — and potential future — legislative partnership is quite unexpected.