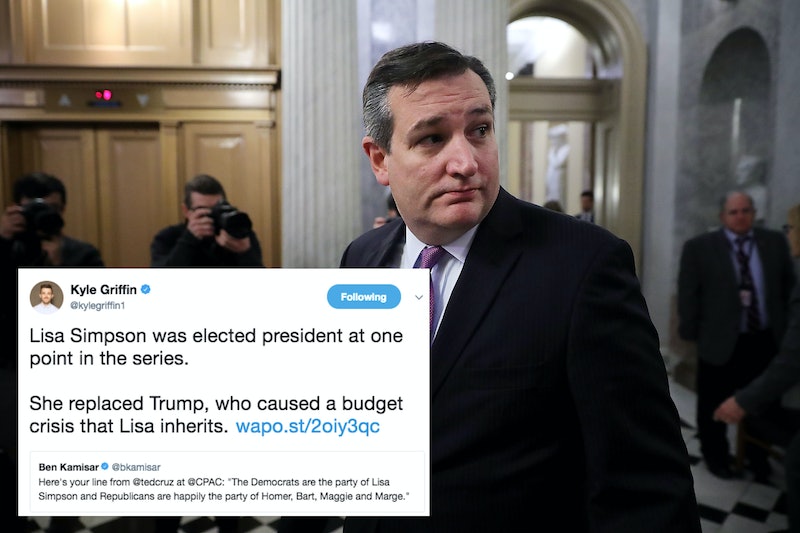 While speaking at the Conservative Political Action Conference on Thursday, Texas Republican Sen. Ted Cruz tried to insult Democrats by calling them the party of Lisa Simpson fromThe Simpsons, which has been on TV for almost three decades. Unfortunately, Cruz's Lisa Simpson descriptor for Democrats fell flat on social media, where the running sentiment of many Twitter users was something like this: "OK? And?"

Cruz made his comment while talking to conservative writer Ben Domenech about the ongoing conversation on gun laws in the United States. The controversial topic has picked up intense momentum after a gunman opened fire on the students and teachers of Marjory Stoneman Douglas High School in Parkland, Florida. At least 17 people, including victims as young as 14, were killed in the horrific shooting.

While speaking with Cruz, Domenech likened the current climate in the United States to one particular Simpsons episode, The Cartridge Family, which also broached the subject of gun control in America. Domenech mentioned Lisa's father, Homer Simpson, who tells his daughter that the Second Amendment was important for protecting one's home and family. Lisa, who is culturally known for her liberal politics, replied to her father by saying the Second Amendment was arcane and outdated, "a remnant from revolutionary days" that "has no meaning today."

To which Cruz replied: "The Democrats are the party of Lisa Simpson, and Republicans are, happily, the party of Homer, Bart, Maggie and Marge."

Cruz's comment elicited a response from The Simpsons' showrunner Al Jean, who suggested, "Ted Cruz says Maggie Simpson would vote for him. I think Ted's the one who could use a pacifier in his mouth."

Pro-Lisa folks agreed that they are indeed like the politically active character.

2. Cruz Is Forgetting A Little Something

One Twitter user said, "Ted Cruz has apparently never watched an episode of the Simpsons in his life because everyone wants to be Lisa Simpson. His statement though shows that he is an unintentional Homer Simpson." (Homer is still nice.)

The analogy may have landed the Republican senator in a tricky spot.

4. Not Just The Gun Control Debate

Lisa has quite a few great moments on the show.

Not sure if you want to liken your party to these particular moments from The Simpsons.

One Twitter user said Cruz was "afraid" of Lisa's philosophy.

Many people seemed to be saying, "Yeah, we don't want to be Homer anyway."

Remember when Lisa was the only one to go to heaven? Yep.

9. You Know What Lisa Represents, Right?

Twitter user Wajahat Ali suggested that Cruz needed to freshen his understanding of the show. "Lisa Simpson is the moral conscience of The Simpsons according to the writers and creators. She is also the smartest person in the family," Ali tweeted.

It felt like a compliment to Democrats on social media.

Maybe Cruz meant to say Mr. Burns (whose slogan might be "Excellent" if he ever ran for president).

Lots of people liked being equated to Lisa.

In the show, Lisa actually goes on to become the president of the United States.

Not a good luck.

Some said that maybe Cruz was trying to say something about the Republican Party.

Maybe the Republican senator needs to watch the show again.

You might want to watch this before praising Homer.

The verdict according to this Twitter user was simple.

From the look of it, Democrats on Twitter don't mind being compared to critical-thinking Lisa Simpson at all. In fact, they seem to welcome it.