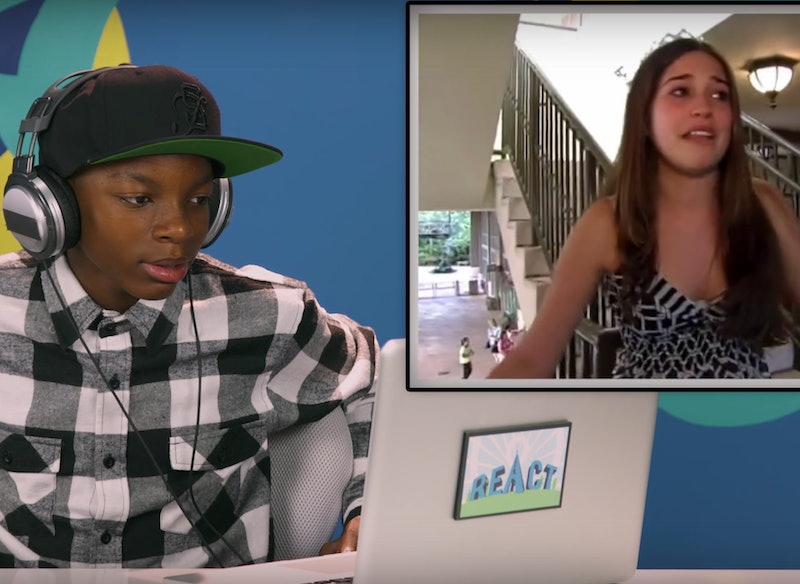 In a video designed to make anyone born prior to 1997 feel like an ancient, dried out husk barely clinging to life, teens react to MTV shows from the early 2000s. If you have fond — or even not so fond — memories of TRL, Newlyweds, Cribs, The Osbournes, or Laguna Beach, prepare to weep as these teens have absolutely no idea what they’re looking at.

These videos make me cranky because they make me feel like my youth is slipping inexorably into the endless abyss of time. They force me to acknowledge that death creeps ever closer with each passing day, and that none of us can escape mortality, anymore than Total Request Live could escape cancellation. And then I feel sad about the impermanence of humanity and about TRL. Sigh.

I do realize that I can’t blame these innocent teens for their unfamiliarity with the reality TV classics of the early and mid-2000s. These teens were born in (I assume) the early aughts, so it’s unlikely that, as toddlers, they would have seen shows like Punk’d or The Ashlee Simpson Show. And, even if you loved them, you have to admit that most of these shows are not actually great — or, at least, not the kind of shows that will get replayed for years and years in the future, so that generation after generation can appreciate them. So it’s not really a surprise that a current-16 year old wouldn’t have much working knowledge of My Super Sweet 16. That said, these whippersnappers make me feel old. Get off my lawn, kids.

It’s interesting to see which of these shows the teens know about and which ones they don’t. They are least familiar with Laguna Beach and Newlyweds: Nick and Jessica. In fact, a couple of the teens first identify Jessica Simpson as Britney Spears. (Also, the hilarity of Simpson’s “Is this tuna fish or chicken?” scene has not aged.) Most of the teens also don’t recognize TRL, which honestly blows my mind a bit — because that’s the show I remember the most from all of these.

The teens in the video aren’t completely ignorant of 2000’s MTV shows: They are most familiar with Punk’d (Remember that time Ashton Kutcher made Justin Timberlake cry?), Jackass, and Pimp My Ride. They’re disappointed to realize that some of Pimp My Ride’s upgrades were removed after filming or even fake. (As are we ALL, kids.)

They end with a clip from Jackass, showing Johnny Knoxville getting repeatedly hit in the genitals with a sledgehammer. Because of course. One of the teens perfectly explains Jackass’s popularity: “It’s fun to watch people suffer.” Isn’t that what a lot of reality TV is about?