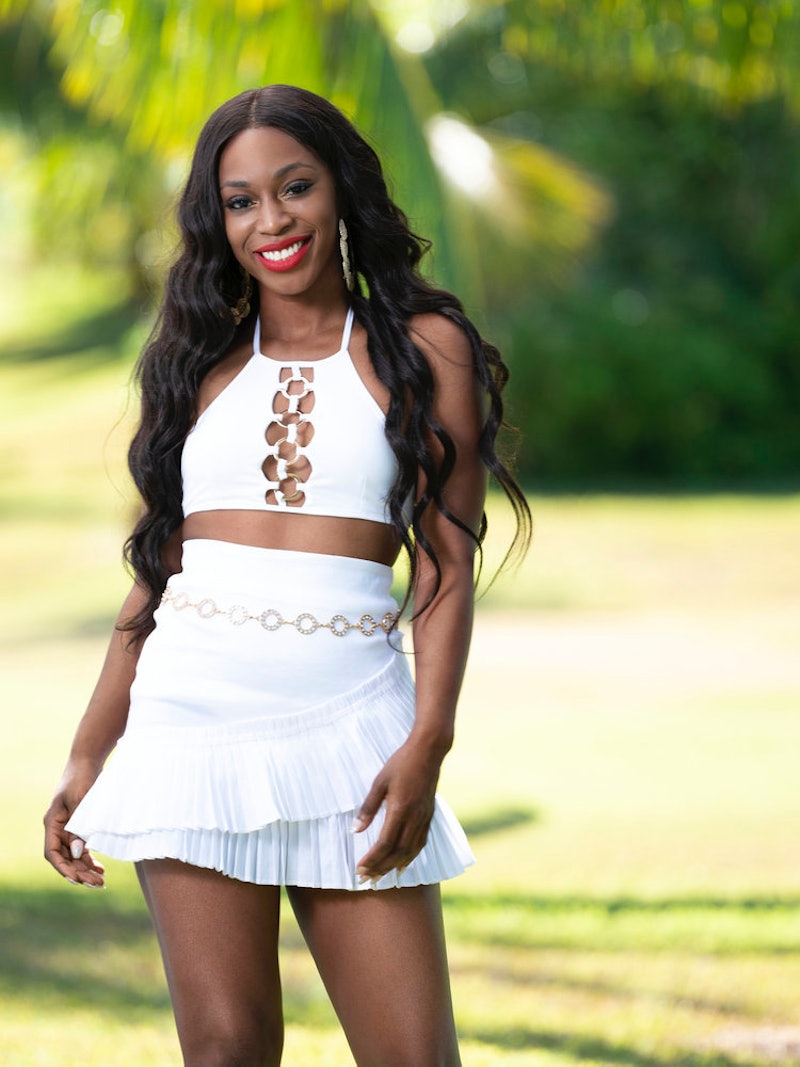 During Temptation Island's Oct. 17 episode, Ashley G. watched in distaste as her boyfriend Rick asked out Medinah. But it were his next words that truly changed Ashley's Temptation Island experience. "I'm not handcuffing her," Rick quipped after host Mark Walberg asked him what he thought about Ashley's date pick, KB.

"Once he said the handcuffing remark, it was like, all bets were off," Ashley tells Bustle. "I wasn't going to be able to trust that he had our best interest at heart." Her response to Rick onscreen foreshadowed what would happen next. "If he's not handcuffing," she said. "Someone else will." That night, she hooked up with KB.

Reflecting back on the moment, Ashley says she thinks she was tempted because of Rick's reactions — or in this case, because of the lack of them. "I allowed myself to really let my guard down. And then I found myself extremely attracted to KB and the way [he] opened up to me," she explained. The next day, the two enjoyed a date together where they seemed to grow even closer. "With KB being away from Rick I just I allowed myself to invest in those feelings," she continues. "Because I knew that Rick was doing the same thing."

Ashley originally wanted to go to Temptation Island to test Rick, who had been disloyal before. So when she was the one waking up next to someone else, she felt a mix of guilt and regret. "I was flustered," she says. "I just remember regretting it and just really fearing the fact that I put my relationship on the line, and I didn't know what KB's true intentions were at all."

Eventually, though, she says she was able to forgive herself and accept the choice she'd made. "I did feel really bad about it instantly. But then I started telling myself it was OK," Ashley recounts. "I understood that I'm in a relationship with someone that has done the same thing to me. And honestly, he's going to see that, and then he'll be able to understand how I felt. And either he'll forgive me, or he'll choose to walk away. And whatever was done, was done like ... I couldn't do anything about it but forgive myself."

Ultimately, Ashley says she doesn't regret what happened on the show, because it led to a lot of needed self-growth. "I learned a lot about self-love, and just accepting myself with all of my flaws, because I'm not flawless," she says. "And I understood after coming back home that I'm the kind of person that likes to place the blame on others. And I have to start holding myself accountable a lot more for my own actions that may hurt others."

As for how the rest of her Temptation Island journey will play out, Ashley says only that once she was actually on the show, her perspective shifted. "I definitely wanted to test Rick going on the show and that was my first and only interest with being [there]," she says. "[But after a while] I was like OK, maybe this is a test for me too. Maybe I can possibly actually find love here, and I'll leave with someone better than Rick. And if I meet someone better than him and I'm falling in love with them, then, you know, it's probably more meant to be."