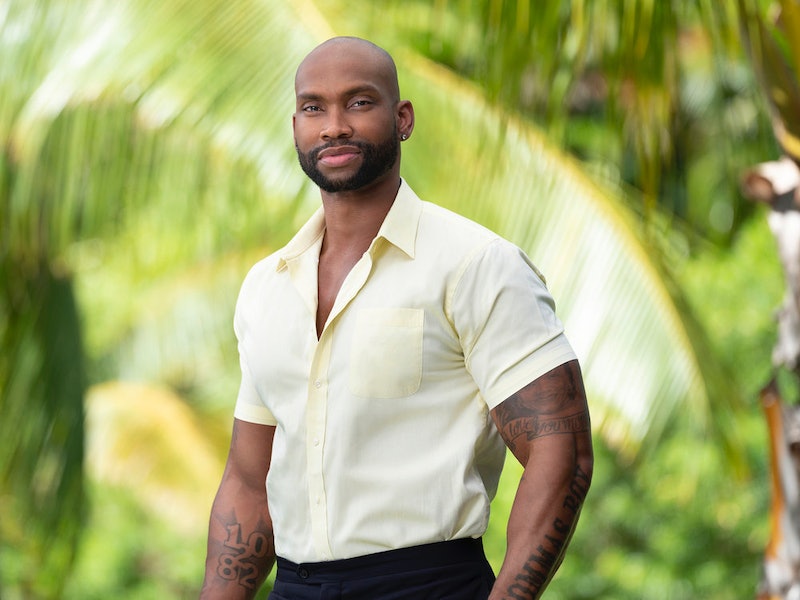 When the Temptation Island reboot returns for Season 2 on Thursday, viewers will meet four new couples all ready to put their relationships to the test — and the 24 singles ready to tempt them away from each other. As we saw in Season 1, such an imbalanced ratio means that some of the singles will inevitably fall to the wayside. But one person who definitely won't is Temptation Island star Kalaan "KB" Brown, a realtor from Long Beach, California who teases that he'll have a "huge impact" on Season 2.

"Be ready to go on a very, very entertaining ride," he tells Bustle. "I don't know what was going on the guy side, but I know over where we were at, the four girls, was very entertaining. So have the popcorn ready for Episode 1 and definitely, definitely have the popcorn ready for Episode 2, is all I'm gonna say. I made a huge impact in Episode 2, so make sure you watch."

That "impact" is likely referring to a connection with one of the four girlfriends — Ashley G., Ashley H., Esonica, or Kate — but KB is tight-lipped about any potential spoilers.

"There possibly could have been a connection I made early on in the season," he says. "For how long? You know, you have to tune in and see."

There could, however, be a few hints in the first episode, which USA made available online ahead of the official premiere. When KB made his grand entrance, the background music turned suddenly ominous. "I got a vacancy in my heart," he told the women, referencing his career in real estate. "And I'm ready for one of you ladies to sign the lease." Ashley G. found that line particularly funny, and her boyfriend Rick noticed.

Later, KB flirted with Ashley G. back at the villa. He told her that at 36 years old, he doesn't have time to be "playing around with anybody" and is looking to settle down — something that seemed to pique her interest. When she reunited with Rick at dinner, Ashley spoke highly of KB's plan to get married and have a family, which made Rick understandably nervous. That moment could foreshadow what's to come.

For now, though, it's worth getting to know a little more about who KB is outside of the show. Aside from selling houses, he's the CEO and founder of his own clothing brand, Ego Maniak, which is "coming soon" according to the brand's Instagram account. KB also says in his USA bio that he's always been a ladies man, but hasn't yet met the right person for him, who he describes as "loyal, supportive, and ambitious with similar values." He went on the show hoping to learn more about himself and find love, and though we won't know until the end of the season if he met either of those goals, he certainly sounds happy with how things panned out.

"I am super, super excited that I did it," he says. "And it was the best experience probably of my life."

More like this
‘The Ultimatum: Queer Love’ Is Officially On The Way
By Radhika Menon and Kadin Burnett
Here’s When You Can Expect More ‘Indian Matchmaking’
By Brad Witter
How To Follow All the 'Married At First Sight UK' Contestants On Instagram
By Sophie McEvoy
'Made In Chelsea's Liv & Tristan Are Hard To Keep Up With
By Sophie McEvoy
Get Even More From Bustle — Sign Up For The Newsletter