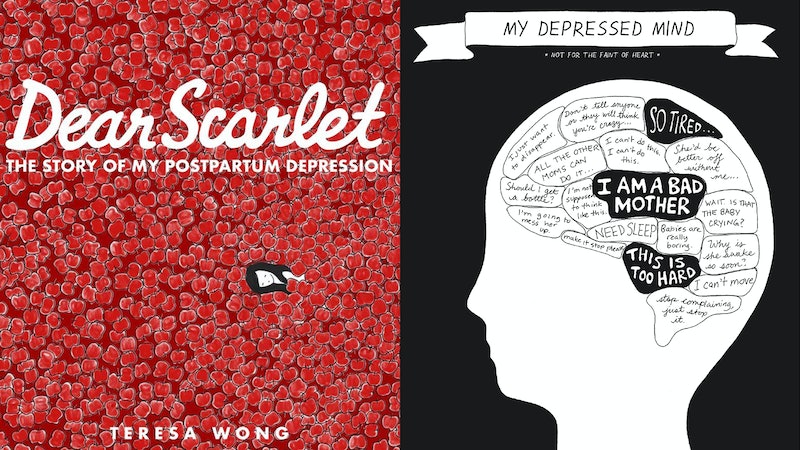 Halfway through reading Teresa Wong’s graphic memoir, Dear Scarlet: The Story of My Postpartum Depression, I turn the page to find a simple, black-and-white drawing of a skull in profile. Wong titled the image "My Depressed Mind." The brain is filled with thought bubbles: "I am a bad mother," "I can’t do this," "I want to disappear," "I'm going to mess her up," and "Babies are really boring." Basically, Wong has just shown me a picture of my own brain, eight months postpartum. Suddenly, everything clicks.

Reading though Wong’s line drawings and handwritten text, I realize that I am not a selfish, heartless monster. I am not uniquely devoid of natural maternal instincts. I have not made the biggest mistake of my life by choosing to procreate. I am not a bad mother. I just have postpartum depression.

Crying every night after my daughter goes to sleep is not my "new normal."

The diagnosis is later confirmed in a 50-minute therapy session. I want to yell from the rooftops "I have postpartum depression!" I am not Khali the sloth bear, eager to devour my young — or, Wong’s example, the captive tiger that ate her own freshly-birthed cub before an audience of horrified zookeepers. Crying every night after my daughter goes to sleep is not my "new normal." I just have a problem — a common problem, in fact, with some fairly unambiguous solutions.

One in seven women who give birth, like me and Wong, will experience postpartum depression. Women of color, like Wong, are twice as likely to suffer from PPD as white women. Dear Scarlet is the story of Wong’s experience, written as a letter to her daughter. With heartbreaking candor and utterly disarming humor, Wong removes the rose-colored glasses through which our culture so often views new motherhood.

'Dear Scarlet: The Story Of My Postpartum Depression' by Teresa Wong

Dear Scarlet is, without a doubt, the most blunt and honest portrayal of postpartum depression I read during the first year of my daughter’s life. Without it, I don’t know if I would have sought the therapy that, almost like a light switch, so effectively returned me to myself.

In Dear Scarlett, Wong describes the days she spent in the hospital after giving birth, when none of the nursing staff gave her any information about what had really happened to her body during labor (she lost almost half of her blood) and the nursery was somehow always full whenever she needed some help. She takes readers through the debilitating exhaustion that marked her first weeks as a mother — an exhaustion that runs deeper than what many new mothers experience. She writes about the exhaustion giving way to depression, the depression giving way to guilt, and the mind-numbing drone of early motherhood when every minute can seem like an hour.

She shares her struggles with breastfeeding, the anemia that left her feeling weak and inadequate, the sudden bursts of adrenaline that made it impossible for her to sleep even when her daughter did. Wong describes the imprisoning isolation, the suffocating boredom, the abnormal amount of time she spent crying — and the fact that nearly everyone around her dismissed her experiences as a normal adjustment to motherhood or the "baby blues."

Her words could have been my words, her story so similar to mine it is both a relief and utterly infuriating; if postpartum depression and its correlating events and symptoms are this common, why are so many mothers still languishing in confusion, seclusion, and fear? Why did it take both Wong and myself months to figure out something beyond the typical growing pains of new motherhood was going on?

...these aren’t things new mothers are supposed to even think, let alone say.

"To this day, whenever I hear about mothers who abandon their babies or drown them in the bath, I feel very, very sad. But not only for the babies…" Wong writes. "I was lucky because I knew I could never hurt you. But I understood what it was like to feel trapped… I fantasized about leaving, just getting in the car and driving away." Wong’s honesty is one that might raise eyebrows and drop jaws; these aren’t things new mothers are supposed to even think, let alone say. They’re also feelings that, in essence, I’d expressed myself as well, in an embarrassingly desperate text message to a friend and mother of two.

As Wong seeks help for her postpartum depression — enlisting professionals as well as her mother and husband — she begins to heal. She discovers a natural rhythm to her daughter’s days, and subsequently, her own. She finds small pockets of time for self-care, and grows in her maternal confidence. She actually leaves the house, both on her own and with her baby (monumental tasks, as all first-time mothers know, made even more insurmountable when PPD is thrown into the mix.) She finds her actual "new normal," one that definitely doesn’t include postpartum depression.

Then, Wong gets pregnant again — but that, perhaps, is a story for another graphic memoir.

I wish I had Dear Scarlet in my hands from the moment I was wheeled into the recovery room, but I’m glad it came to me when it did. It’s a memoir that tells a too-often-unheard narrative about what many women really go through on the journey from childbirth to motherhood. “Motherhood is intense. It is both wonderful and unbearable, often at the same time,” Wong writes in Dear Scarlet. “And I don’t believe there is one right way to feel about it — just as there is no singular definition of a good mother.” Wong is a good mother. I am a good mother. And if any of the above sounds familiar to you, don't be fooled: You're probably a good mother, too. You might just have postpartum depression.