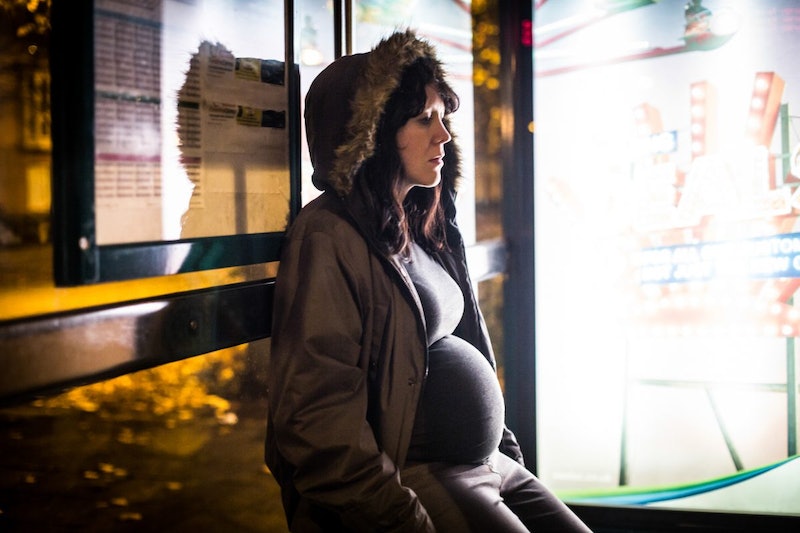 Put simply, Prevenge is about a pregnant woman, Ruth, on a killing spree. Her 7-month-old fetus, growing inside her increasingly large belly, speaks to her, telling her who to kill and when. The soon-to-be-mother resists, but ultimately gives in to her child's desires — because after all, baby knows best.

It's a twisted, bloody, and horrific narrative, and yet, I was rooting for this woman (and occasionally even her blood-lusting baby) from the first, blood-soaked kill. Because while Ruth exists in a heightened reality, and the crimes she commits are undeniably bad, her struggle feels real, compelling, and is admittedly a whole lot of fun to watch. The appropriately titled Prevenge, out March 24, written, directed, and starring Alice Lowe, makes the argument that women who do bad things are necessary for good representation of women in film, too.

I meet up with UK-based Lowe at the Silverlake bungalow where she's staying for the duration of her California press tour. Lowe, who was actually seven months pregnant while shooting the film, now has a young daughter — who crawls across the room as we chat, rolling apples across the floor and generally being an extremely happy, playful kid.

"We think of pregnant women being weak, but I wanted the character to be powerful. She's an anti-superheroine," Lowe says of the murderous mother she plays on screen. "We think audiences can’t empathize with women who do bad things, so I really wanted to push the audience. I wanted to say that women on screen are individuals, and just because this woman is making choices that you wouldn’t make, doesn’t mean you can’t enjoy watching her, or be interested in her, or empathize with her."

Lowe — who is oh-so-sweet and considerate to me, her publicist, and of course her child — clearly has compassion for others. She's seemingly nothing like the woman-with-an-unforgiving-blade she wrote for herself to play. But take a deeper look: Ruth may be compassionate, too — just not towards the men and women she ultimately slays. Lowe wanted to ensure Ruth's depiction was complicated, and she has her fingers crossed viewers won't make assumptions about all pregnant women after watching Ruth's journey unfold.

"Just because this woman is doing bad things doesn’t mean that all pregnant women are mad or all women are bad. When you watch Taxi Driver you don’t think, 'this is a terrible representation of men.' I wanted to experiment and see if people can deal with this outsider female character who’s lonely and strange. Cinema is a really important tool to understand how other people feel, whether they're a different age, race, or gender."

And as someone who creates her own content, it was important to Lowe to showcase a complex, unexpected female character that audiences perhaps hadn't seen before.

"We’re led to believe that women are a different species, that they're some sort niche genre of human beings," Lowe says. "But all human beings are generally quite similar. We know what sadness is, we know what jealousy is... [People] underestimate what a woman’s life contains and the complexity of a woman’s life."

According to Lowe, this idea also manifests itself in what kinds of roles women of a certain age are offered. The actor, 39, says the characters that land in her lap are mostly moms. And while that's a big part of who she is in her private life now, she finds it frustrating that her age can often determine her professional opportunities.

"I’m so used to going in for roles where the woman is miserable because she’s 35," Lowe begins. "But I don’t see that reality in my friends — I see women who are accomplished, intelligent, and comfortable with who they are. But that's not what you see on screen."

So with Prevenge's Ruth, Lowe had a goal: "Forget your preconceptions, you’re allowed to think that this woman is quite cool," she says. Because after all, "we see men all the time in these roles. We see men that are aging or graying or wrinkly, and you’re like, 'he’s a cool guy.' We value [men] for their experience."

Thankfully, for the most part, audiences have embraced Lowe's kooky, violent protagonist. The film has an impressive 95 percent rating on Rotten Tomatoes, and Lowe can only recall one scathing review — from a writer who hasn't even seen the film.

"We had one fundamentalist website that said it was an abomination. They haven’t seen the film, but they just thought the concept was appalling," she says, admitting that she's surprised there hasn't been more backlash.

Perhaps this means her mission — crafting an ill-intentioned female protagonist who is still well-rounded, conflicted, relatable, and human despite it all — was a success. Because beyond the blood and guts, Ruth's motives are comprehensible. She may be a killer, but we can all understand doing unthinkable things for our families. Ruth is, in many ways, like you and me — she's just much better at wielding a kitchen knife.