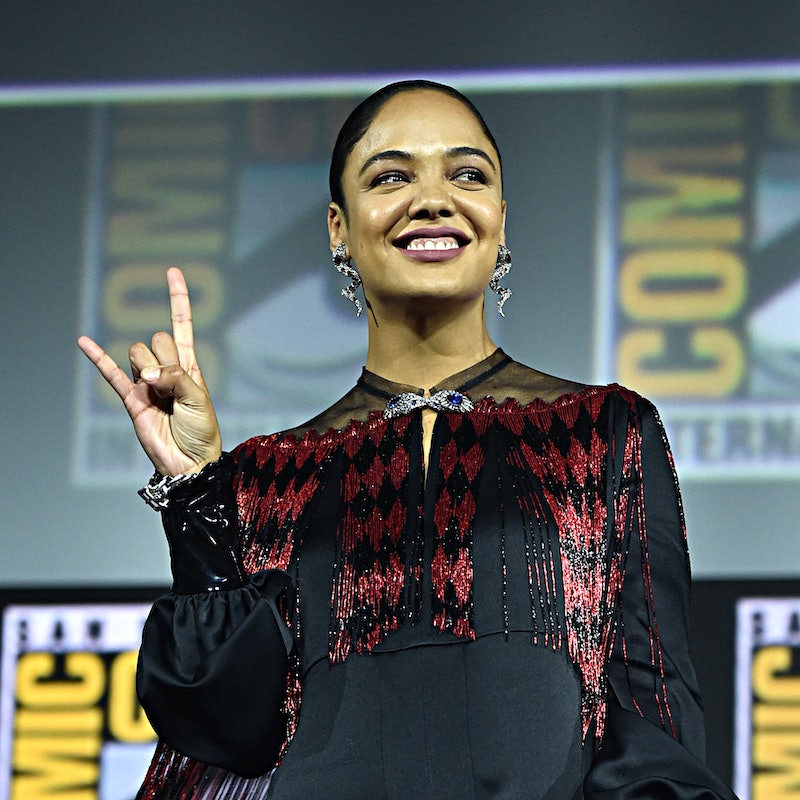 Well, it's about time. Better late than never, though. After much anticipation and speculation, Marvel Studios president Kevin Feige confirmed to io9 that Tessa Thompson's Valkyrie will be the MCU's first LGBTQ superhero. Obviously, this is a pretty big deal — and during a her short appearance at Marvel's massive San Diego Comic-Con panel, Thompson has made it clear that she's not going to waste any time in finding herself a Queen.

OK, so, in case you're not familiar, Valkyrie is a badass, bisexual female warrior who was first introduced to the Marvel Cinematic Universe in Thor: Ragnarok. There was supposed to be a moment in that film that alluded to Valkyrie's sexuality, Thompson told Rolling Stone in October 2017, but it ultimately got cut because "it distracted from the scene’s vital exposition." Hmm. Interesting.

"There were things that we talked about that we allowed to exist in the characterization, but maybe not be explicit in the film," Thompson told the outlet. And by not making it explicit in the film, it left the character open to many different interpretations. Still, though, she said that she hoped they could "expand on Valkyrie’s love life" in the MCU eventually, and now it seems as if that day has come.

So, while technically Valkyrie has been the MCU's first LGBTQ superhero since Thor: Ragnarok came out in 2017, it's only just now become official. When asked during this year's Comic-Con whether or not Valkyrie will finally get her LGBTQ storyline in the fourth Thor installment, Thor: Love and Thunder, Feige confirmed to io9, "The answer is yes." He then went on to explain, "How that impacts the story remains to be seen with that level of representation you’ll see across our films, not in just Thor 4."

OK, but what does that mean, exactly? "As new king, she needs to find her queen," Thompson told fans during Marvel's panel this past weekend. "That will be her first order of business [in Thor 4]. She has some ideas. Keep you posted."

Valkyrie was crowned King of Asgard at the end of Avengers: Endgame, so, yeah, she definitely needs to find herself an equally badass lady-love to rule by her side. Not that she couldn't handle it all by herself, of course, but she definitely deserves to have a little romance in her life.

Who could ever be worthy of filling that position, though, you wonder? Well, how about Jane Foster, aka the Mighty Thor (sometimes known as Lady Thor)? Marvel announced at Comic-Con that Natalie Portman will be reprising her role as Foster in Thor: Love & Thunder, and while a relationship between her and Valkyrie could make things a little awkward for her ex, Thor (Chris Hemsworth), if she's worthy of wielding Mjolnir, she's probably worthy of the metaphorical throne.

Thompson actually shared a photo of herself and Portman from Marvel's recent panel in her Instagram Story, and joked in the caption that she'd already begun "Queen hunting." In the pic she used, Thompson has her arm slung around Portman's shoulders. Friendly gesture between co-stars or a hint at their characters' closeness to come? For now, that remains unclear. The photo is pretty great, though, regardless.

The fact that Valkyrie will officially be the first LGBTQ superhero in the MCU is definitely worth celebrating. Perhaps with a cocktail or two? It's the Valkyrie way, after all.

More like this
Zendaya Shares Intimate Photo With Tom Holland To Wish Him A Happy Birthday
By Bustle Editors
How To Stream 'Thor: Love And Thunder'
By Arya Roshanian
The New Bachelor Will Be Announced Next Week & Here Are The Top Contenders
By Grace Wehniainen
6 Things I Noticed Rewatching The Funny Girl Episodes Of Glee
By Jake Viswanath
Get Even More From Bustle — Sign Up For The Newsletter