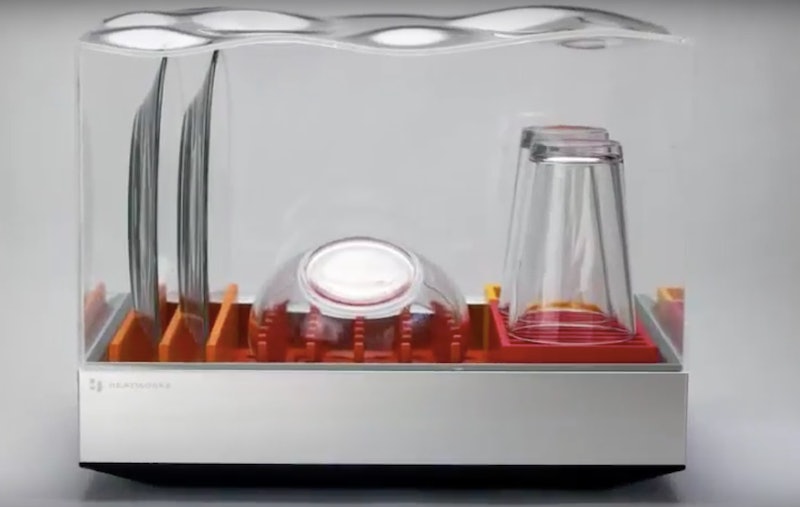 I've lived in four different apartments in New York City in my adult life, and not a single one has had a functioning dishwasher (one apartment did actually have a dishwasher, but it never, ever worked). Having to hand wash dishes is sort of a pain, and if you have roommates, it can often lead to a disgusting dish pileup only the bravest washer can face. Enter, then this countertop dishwasher, which looks like it'll be a real game changer for those of us relegated to scouring last week's spaghetti sauce off the good pot.

As reported by Mashable, the aforementioned majestic invention, dubbed the Tetra, is the brainchild of Heatworks, which makes tankless water heaters, and Frog Design, a Brooklyn-based industrial engineering company. The two companies' combined powers have blessed us with a sleek, hip-looking box that's both energy efficient and'll fit in even the most pint-sized NYC-sized kitchen, plus it'll clean your dishes without you having to touch a sponge.

How it works is this: first, you'll pour a half-gallon of water and some dishwashing detergent into the Tetra's lower compartment, then load your dirty cups, plates, bowls and silverware into the Tetra's rubber dish organizers, which you can mix-and-match depending on what you need to wash (for instance, if you've dirtied up a bunch of plates, you can take out the cup holders to make space). Plug the Tetra into any household wall unit, and voila—you'll have clean dishes in about 10 minutes.

Please note that in addition to being incredibly useful, this thing is downright beautiful. Even though it will certainly take up some storage space (which is nothing to sneer at when you can't even take your air-conditioner out of your window because you don't have a closet to stick it in, so you're forced to spend winter suffering a very nasty draft) you can treat it like a work of art in addition to a futuristic life-changing piece of technology.

Oh my god I love it so much, LOOK AT IT.

As with most millennial-friendly technology, Tetra also comes with a companion app, which will let users adjust water pressure and cycles, and even start the machine remotely, so you can prep your dishes and have them clean while you're out of the house. Even the Jetsons couldn't envision such innovation.

The bad news is, it doesn't look like we're getting this beautiful thing until next December, though once it's on the market, it'll run for only $299, which is a lot more money than a bottle of Palmolive, but a lot less money than the lifetime of therapy you'll need after getting into a violent war of passive aggression with the roommate who leaves a week's worth of fetid dishes in the sink before going on vacation for a month. Angry notes take a toll on the psyche after a while, as I've learned the hard way.

Now that Heatworks has solved the dishwasher problem, might I suggest a few other apartment-related conundrums that could benefit from such innovation? Like, for instance, a microwave that takes up NO counter space, and therefore does not need to be precariously perched on a high shelf no one in my apartment can reach? Or a special robotic arm that can unscrew smoke detector covers and replace the batteries when they start beeping in the middle of the night? Or an alarm that will alert me when one of my roommates has finished my coffee and failed to replace it, so I'm not surprised and/or horrified when morning rolls around and there's no caffeine to wake me up? Just a few thoughts!