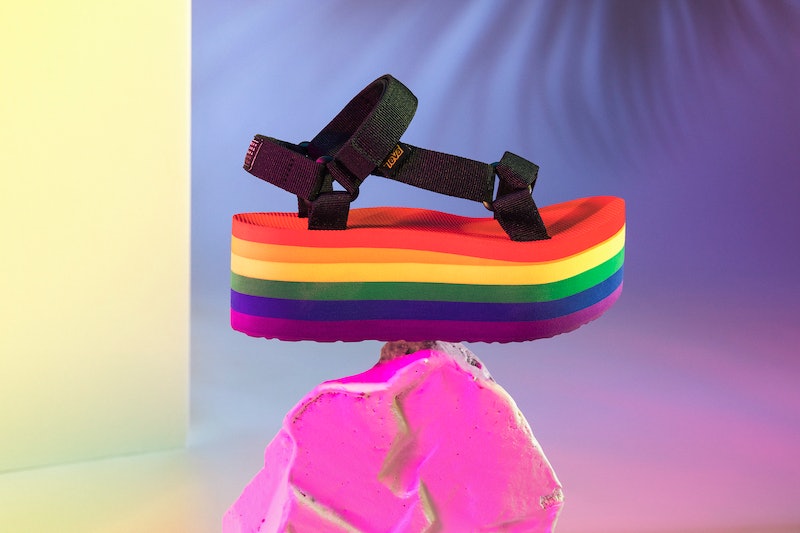 Teva is on a mission to help you take your Pride outfit to new heights, literally. The Teva x Tegan and Sara collaboration takes the brand's iconic Flatform Universal sandal and wraps it in rainbow stripes. The end result is statement-making shoe that is as comfy as it is eye-catching.

Teva teamed up with the Tegan and Sara Foundation to help fight for the health, political, and economic equality for young girls and women in the LGBTQ+ community. For the twin sisters, linking with Teva to create a Pride sandal was a natural collaboration.

“We got our first pair of Teva sandals when we were 16," Tegan and Sara shared in a press release. "This rainbow Flatform collab is like full circle LGBTQ+ Pride validation. Teva's generous support for our foundation will allow us to help even more LGBTQ+ youth."

Teva will donate $15 for each pair of Flatform Universal Pride sandals sold, up to a donation of $30,000 to the Tegan and Sara Foundation. The donation will fund scholarships for LGBTQ+ youth to attend summer camps that help develop self-confidence and leadership abilities in a safe environment.

This will be Teva's first Pride collection. “Teva has long stood as an expression of freedom and we are excited to be a part of celebrating that with the LGBTQ+ community and contribute to their continued fight for equality," Erika Gabrielli, Senior Marketing Director at Teva, said in the release.

Update: In its campaign photos, Teva also made sure to work directly with the LGBTQ+ community.

"In terms of casting for our shoot, we actually cast multiple transgender models. We worked with a local non-profit to cast people from our local LGBTQ + community," Gabrielli tells Bustle. "We really wanted to cast real people that are representative of our LGBTQ + community, which included transgender.”

The Teva Flatform Universal Pride sandal has a platform that is over two inches tall, giving you some height during your Pride parties. The black sandal has a rainbow striped platform and midsole, which is inspired by the LGBTQ Pride flag's message of inclusivity and empowerment.

The straps are also made from water-ready polyester, which is extremely durable and dries quickly after getting wet. So if it decides to rain during the Pride Parade, your shoe situation will be set.

The Teva Pride sandal will retail for $80, and will go on sale starting May 22. It will be available for purchase on both Teva.com and Nordstrom.com.

The original Flatform Universal shoe has rave reviews, especially when it comes to the comfort department. That means the new Pride sandal will feel the same. "I was worried they would be too impractical for daily wear, but they go with everything (I got the all black ones) and the platform isn't too outrageous or hard to walk in," one buyer posted. "I actually have worn these on a 1.5 mile walk and they did just fine."

You can easily walk from parade, to party, to bar in these platforms, making these Teva sandals the ultimate Pride pick. You will be comfy and eye-catching throughout all of the festivities!