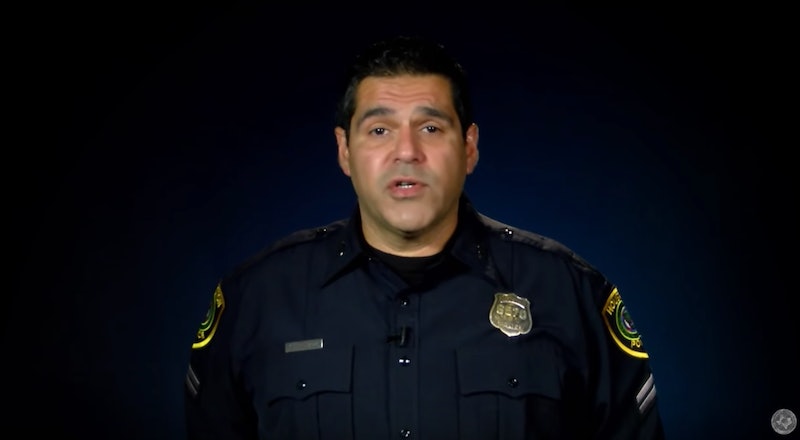 Thanks to a new law, Texas high school graduation requirements now include instructions on how to interact with police officers in the state. Beginning with the class of 2022, students in the Lone Star State will not be given diplomas unless they complete a class and watch an instructional video on best practices for dealing with police officers during traffic stops. It's the result of the Community Safety Education Act, which was signed last year by Gov. Greg Abbott.

The requirements only apply to freshman in the 2018-2019 school year and beyond, meaning that current sophomores, juniors and seniors will be exempt. State lawmakers proposed the bill in an attempt to reduce police violence in the state, but it's been criticized for putting the onus of this squarely citizens, as opposed to law enforcement officers.

The 16-minute video was produced by the Texas Commission on Law Enforcement, the state regulatory agency for Texas police officers, and it features dramatic reenactments of traffic stops, frequently asked questions about how the citation process works, and instructions from officers on how to handle interactions with law enforcement. "Keep your hands visible," "do what the officer asks," and "wait for the officer to tell you it's okay to leave" are among the tips offered by the video.

The Community Safety Education Act was crafted as a response to recent police shootings in the state. Between 2015 and 2017, Texas police officers shot and killed 251 people, 48 of whom were unarmed, according to the Washington Post and Mapping Police Violence.

"This content is designed specifically to make certain that the trust factor between law enforcement and citizens is stronger than ever," state Sen. Royce West, one of the bill's chief proponents in the legislature, says in a brief introduction at the beginning of the video.

However, the law has been criticized for implying that the responsibility for avoiding police violence lies solely with citizens, rather than police officers themselves. In 2017, a Texas police officer fatally shot Lyndo Jones, who was unarmed, in the back while he had his hands in the air and was pleading not to be shot. That same year, Balch Springs officer Roy Oliver opened fire on a car full of teenagers as it was leaving a house party, instantly killing 15-year-old passenger Jordan Edwards. Oliver was convicted of murder in August.

More recently, Dallas police officer Amber Guyger shot and killed Botham Jean in his own home; Guyger, who has been charged with manslaughter, said that she mistook Jean's apartment for her own and thought Jean was a burglar.

“It’s not the responsibility of any Texan to extend the olive branch to police to reset something,” Ashton Woods, the co-founder of Black Lives Matter Houston, tells the Dallas News. “I don’t think the onus should be on us.” John Fullinwider, co-founder of Mothers Against Police Brutality, called it a "a tragic state of affairs that we have to train young drivers, particularly young black men, how to act so that a police officer doesn’t shoot them."