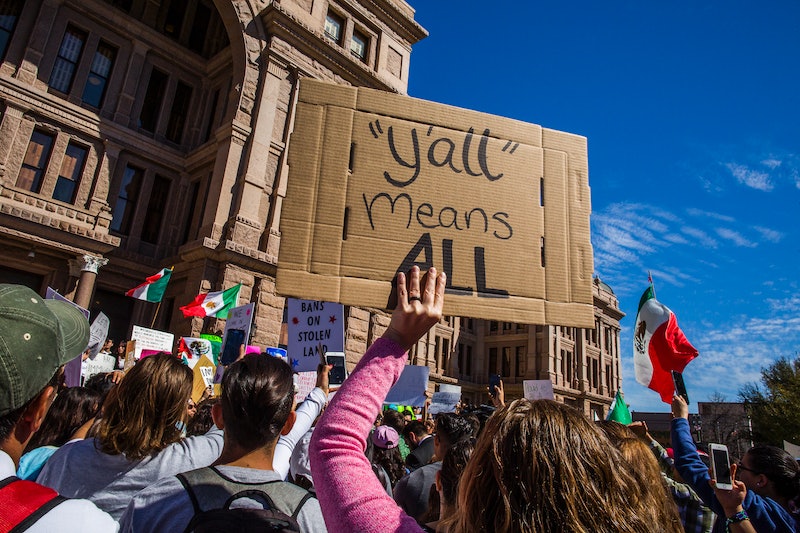 State Republicans are once again trying to restrict transgender people's use of restrooms, this time in Texas. On Monday, Texas lawmakers passed a piece of legislation through the House that restricts how transgender people can access school bathrooms. The bill will now be sent to the Texas Senate, which passed a much broader version of the House's bathroom bill earlier this year.

The legislation requires individuals to use bathrooms associated with their "biological sex" — the gender they were assigned at birth. This, of course, does not allow transgender individuals to use the bathrooms that accord with their true gender identities. If transgender students did not want to use their assigned-gender bathroom, they would have to use single-stall bathrooms under the provisions of this legislation.

Texas state politicians claimed that the bill, which resembles the contentious but (partially) repealed North Carolina bathroom bill, is not intended to be discriminatory. "It's absolutely about child safety," said Republican Rep. Chris Paddie, who authored the controversial bill. "This is about accommodating all kids."

On Sunday, the Texas House of Representatives fast-tracked the passage of this legislation by tacking the bathroom restrictions bill onto an otherwise-unrelated piece of legislation concerning school emergency operation plans during natural disasters.

According to the Washington Post, the Texas House passed the bill after Lt. Gov. Dan Patrick, who heads the State Budget Board, threatened to delay the budget from passing before legislative session ends on May 29, thus forcing Gov. Greg Abbott to call a special session. "I think the handwriting is on the bathroom wall: Stay out of the ladies' room if you're a man," Patrick said in late April, voicing his support for "biological sex" bathrooms.

"Governor Abbott has said he would demand action on this in a special session, and the House decided to dispose of the issue in this way,” said House Speaker Joe Straus, a Republican, according to the Austin-American Statesman. “Members of the House wanted to act on this issue, and my philosophy as speaker has never been to force my will on the body.”

Texas Democrats did their best to oppose the bill. "Bathrooms divided us then and bathrooms divide us now. Separate but equal is not equal at all," said Houston Democratic Representative Senfronia Thompson on Sunday, comparing the bathroom bill to 20th-century racial bathroom restrictions.

“This amendment was more about using trans kids as a negotiating tool at a contentious point in the session than about making kids safer. It paints a target on the backs of already vulnerable children,” said Representative Celia Israel, a Democrat, according to the Statesman.