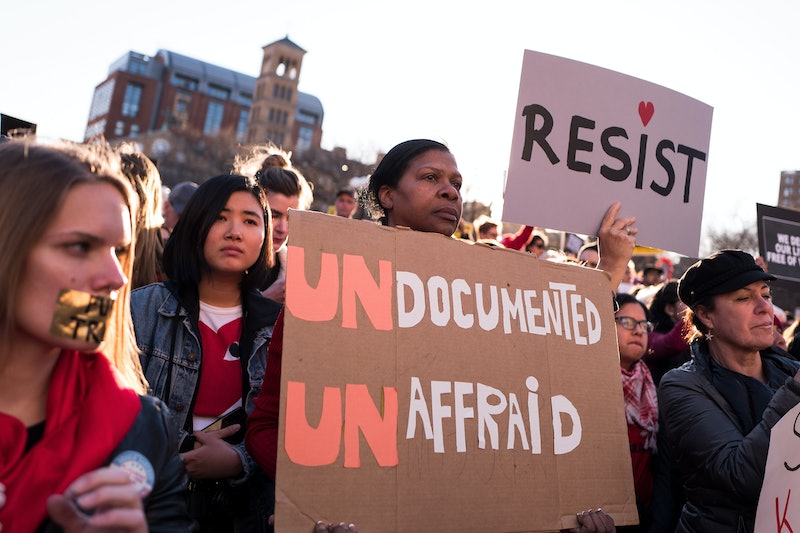 There’s some good news when it comes to immigration matters in the Lone Star State. On Tuesday, KXAN reported Williamson County in Texas voted to close a prison for immigrant women — an infamous ICE-affiliated detention facility that has previously been accused of overlooking sexual abuse.

In 2016, Williamson County, whose population is predominantly white and conservative, voted for President Trump. The Trump administration is responsible for the present day "zero-tolerance" immigration policy, which has led to nationwide public outrage and increased organizing among activists.

With the help of local organizers, it looks like attitudes have changed in the Lone Star State's county. On Tuesday, county commissioners voted in majority to terminate the T. Don Hutto Facility's contract, under the Intergovernmental Services Agreement, with ICE. The county will also end its agreement with CoreCivic — the private company responsible for running the prison. On Jan. 31, 2019, the agreement will officially be over.

One of the commissioners for the county, Terry Cook, released a statement on the development, which Rewire News' Teddy Wilson shared on Twitter.

Cook stated, "I thank the other members of the Court for voting with me to get ourselves fully focused on the business of the county. Being the go-between for federal agency and a private business on a federal issue such as this is not a core county function. Today's vote represents the compromise made to get us the necessary three votes to pass."

The commissioner gave a brief note on celebrating the move. But she placed much more emphasis on the need for activists to waste no time and "redouble" their commitment to the issue of the immigration in the United States. Cook said,

I have appreciated the passion from activists that has been expressed to me and this Court in regards to T. Don Hutto, and while this vote today does not solve the larger issue of immigration, the future of the women detained there, or the closing of the facility, I hope these activists do not celebrate this vote, but redouble their efforts in changing immigration policy at the federal level.

In response, ICE and Williamson County Sheriff's Office said that they looked into the allegation. But ultimately both entities said that Monterrosa's accusation was unsubstantiated and thus could not be further pursued.

Another immigrant detainee named Sulma Franco corroborated Monterrosa's claim, telling KXAN, "I remember there were many times when the guards came to us, the women, and asked for favors that are just not ok to ask from an official to the women who were detained." Franco was first placed in T. Don Hutto in 2009.

Undeterred by ICE and the Williamson County Sheriff's Office's response, grassroots activists continued to call on locals to vote to end the private prison. Their demand seemed simple: the mistreatment of the imprisoned women had to stop.

Activists who have advocated for the closing of this prison, which reportedly hosts some 500 immigrant women, want commissioners to do more. Grassroots Leadership's Detention Visitation Coordinator Sofia Casini said that commissioners can reduce the current waiting period, which spans over months, down to 90 days. But it's not clear if local commissioners will pay heed to Casini's recommendation.

For now, activists are just celebrating the news, which seems to have breathed some hope in Williamson County. One of the groups that helps immigrants in the Central Texas, known as American Gateways, told KXAN that the vote on Tuesday was proof that "the Williamson County community puts families above financial gain."