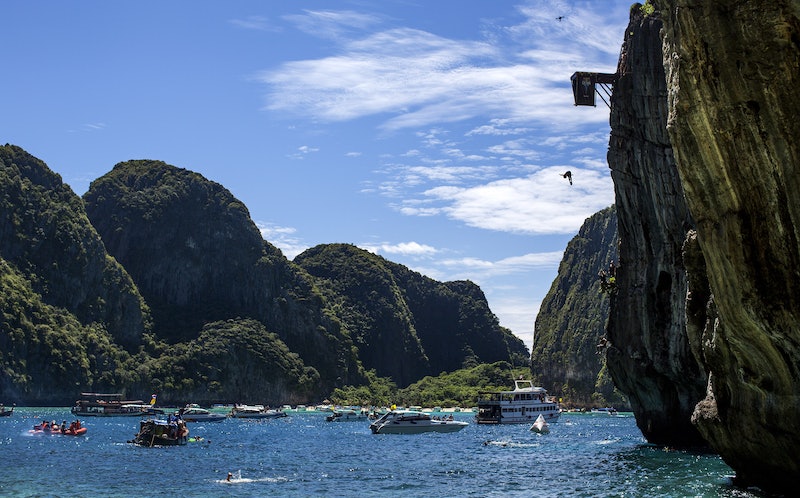 In some frustrating environmental news, Thailand’s Maya Bay will be closed "indefinitely" after an influx of tourists messed up the coral surrounding the island, CNN reports. Maya Bay in Thailand was made famous by the 2000 film “The Beach” starring Leonardo DiCaprio, says CNN, where the movie was filmed. But the bay’s corals have been decimated by the influx of tourism over the last 18 years, prompting Thailand’s Department of National Parks, Wildlife, and Plant Conservation (DNP) to close the bay off to tourism indefinitely until the ecosystem has a chance to recover, CNN reports.

Maya Bay is ringed by the cliffs on Ko Phi Phi Leh Island, says the Express, and has become one of Thailand’s most-visited tourist attractions since DiCaprio’s movie was released, garnering up to 5,000 visitors coming on small speedboats or larger party boats. After the release of DiCaprio's movie, tourism officials in Thailand reportedly leveraged the publicity to entice people to visit Maya Bay, says The Guardian, but it took a serious toll on the environment. Millions of visitors each year dropped their boat anchors on the coral, tourists walked on it or picked it, or they contaminated it with garbage or non-biodegradable sunscreen, The Guardian reports. Thai authorities originally shut down Maya Bay temporarily on June 1, says The Guardian, to let the area recover from the destruction that decimated an estimated 80 percent of the bay’s coral.

“We have evaluated each month and found out that the ecological system was seriously destroyed from tourism,” Songtam Suksawang, the director of the national parks department, told The Guardian. “It’s very difficult to remedy and rehabilitate because its beach was completely destroyed, as well the plants which cover it.” Suksawang told The Guardian that it was “impossible” for the coral to recover within the four months they had initially allotted. "We need at least a year or even up to two years or maybe more for the environment to recover — this includes the coral reefs, mangrove, and the beach,” Suksawang told The Sun.

Tourism makes up 12 percent of Thailand's economy, according to Reuters, but there have been growing concerns about Thailand’s ability to manage its growing number of visitors and environmental impact. The country is one of the world’s biggest contributors to ocean waste, though it did ban smoking and littering at 24 of its beachside locations over environmental concerns this year, Reuters reports. However, despite evidence of the damage at Maya Bay, Thai authorities were reportedly hesitant to close it down because of all the tourism revenue it was generating, The Guardian reports.

According to Reuters, Maya Beach isn’t the only tourist destination in Southeast Asia that tourists have forced authorities to shut down because they’ve trashed them. In the Philippines, officials temporarily closed Boracay, says Reuters, after President Rodrigo Duterte called the island a "cesspool" because of all the sewage that had been dumped directly into the ocean. Boracay is set to reopen this month, CNN reports, but Maya Bay isn't set to reopen until the area's ecosystem is on a path to real recovery.

It should go without saying that the Earth is a precious resource. If you're ever in an area with coral reefs, the National Ocean Service says not to touch it, anchor your boat in sandy areas, and to use sunscreen that's safe for coral. It's not too late to save other areas with amazing natural resources like Maya Bay.