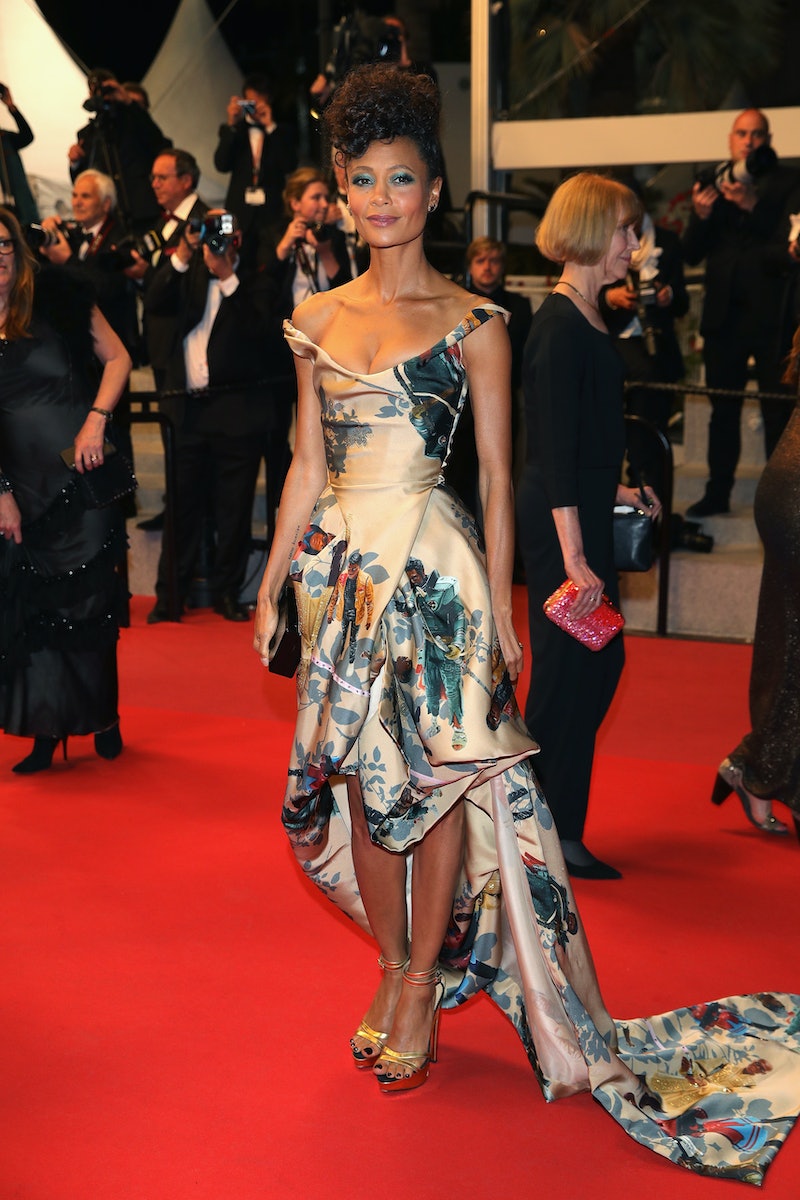 Stars Wars branding is off the charts RN, with Solo: A Star Wars Story set to hit the multiplex on May 25. So many fashion and beauty brands are dropping Star Wars-themed products. Last night, actor Thandie Newton wore a custom, Star Wars dress by Vivienne Westwood for The Green Carpet Challenge on the red carpet at the Cannes Film Festival. But it wasn't simply depictions of or inspo taken from the most familiar characters. Newton and the designer found a clever, fresh, and touching way to pay tribute to the black actors and characters that are critical to the franchise.

It was also a brilliant way for Newton to celebrate her own work in the film. She is the first black actress to have a starring role in the franchise. She marked the occasion by making a statement with fashion and honoring those who came before her.

Newton's gown had a mullet silhouette. It was short in the front and long in the back, with a train. According to PEOPLE, the frock featured renderings of figurines taken from the actor's personal collection. Wow, right?!

What a lovely gesture on Newton's part — both literally and figuratively.

It was like a graphic novel or film storyboard come to life in a dress and in fashion form. Check out all of that detail in the train. The visuals grab the eye and truly tell a story.

Graphics aside, the silhouette is utterly gorj. From the bunching to the off-the-shoulder, sweetheart neckline to the base shade, it was darling and game-changing.

The dress was almost an optical illusion. From the back, it looked like a ball gown.

It was poufy, punchy, and playful in the front. From this vantage point, you can get a better look at the characters. Additionally, Newton and Westwood worked with Eco-Age on the dress as part of the Green Carpet Challenge. The GCC is in its eighth year of showcasing sustainable looks.

Notice how Newton's stunning eye makeup matches the green detail in the dress.

Unfortunately, while we hate to be destroyers and crushers of dreams, the custom couture dress is not available for purchase. It's truly one of a kind.

The dress effectively played with volume and was super versatile — it looked entirely different from every angle. Also, Newton's chunky and strappy gold heels had a '70s vibe. Her footwear worked perfectly with the aesthetic of her dress. Can we also take a second to talk about how awesome it is that Newton owns a collection of Star Wars action figures? Her nerd chic is next level.

This Twitter user certainly agrees. Of course social media was abuzz about Newton's dress How could it not be?!

Newton made a serious fashion move and served up a lewk.

This tweet sums up all of the feels. You could literally not care about fashion one bit but still be totally moved by this dress.

Newton clearly won the red carpet, Cannes, and the Internet with her Star Wars dress. There was so much thought and consideration put into it. Factor the personal collection and the environmental friendliness into the design and we're blown away on every level.

Since you can't cop this dress for yourself, there are plenty of other Star Wars-branded collabs available.

The Kipling x Star Wars bag collection is loaded with adorable and wearable accessories and bags.

The Terez leggings collection lets you run errands or work out while displaying your fandom.

The fashion force was most definitely with Thandie Newton and her Vivienne Westwood dress. It can be with you in other ways!

More like this
Kendall Jenner Just Rocked A Sheer Dress & A ‘90s Rosette
By Allie Fasanella
Jennifer Lopez Wore A Naked Dress To The Shotgun Wedding Premiere
By Dominique Norman
10 Times Haley Lu Richardson Dressed Just Like Portia
By Dominique Norman
Twitter Memed Doja Cat's Red Schiaparelli Look & I Am Cackling
By Dominique Norman and Kelsey Stiegman
Get Even More From Bustle — Sign Up For The Newsletter
From hair trends to relationship advice, our daily newsletter has everything you need to sound like a person who’s on TikTok, even if you aren’t.