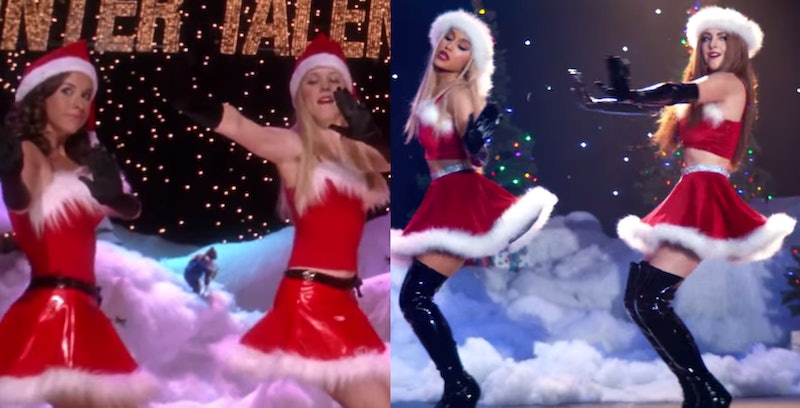 If you've ever wanted a remake of your fav classic 2000s rom coms, Ariana Grande kind of has you covered with her newest music video. These photos of "Thank U, Next" vs. the movies the singer is referencing in the video show that Grande was determined to be super accurate to her inspirations. Grande referenced four classic films in her five-minute video: Mean Girls, Bring It On, 13 Going On 30, and Legally Blonde.

Not only did Grande recreate many of the iconic moments from those films, but she even brought back some of the original stars to do it. For example, she cast Jonathan Bennett who played Aaron Samuels in Mean Girls and Jennifer Coolidge who played Paulette in Legally Blonde to reprise their movie characters.

Grande and her team also took painstaking detail to recreate the classic bedrooms of characters like Mean Girls' Regina George and Bring It On's Torrence Shipman. Clearly Ari is a fan of the work she's referencing and it shows in every scene.

Below you can see a comparison of scenes from the real movies (the first photos) to scenes from the music video (the second photos). I had to clarify since they're super spot on and sometimes it's hard to tell which image is the homage and which is the real one.

Both the music video and the movie have long sequences where other people gossip about who Regina George/Ariana Grande is. And they both have variations of "one time she punched me in the face, it was awesome" with Grande's video having someone say she punched herself in the face because Grande is always saying, "Honest to god, knock me out."

The Return Of "Army Pants And Flip Flops" Girl

In the Mean Girls movie, one character speaks highly of Cady, saying that because Cady wore army pants and flip flops, she also did. In the music video, the same actor returns — only this time her reference is about breaking off an engagement because Grande once also did that.

The Introduction Of The Burn Book

Grande's version has her song title written on it.

Grande Adds A Photo To Her Book Via Glue Stick

Just like Regina George pasted in her own photo to the burn book (to frame Cady), Grandee also adds a pic to hers.

The Plastics Walking In Unison

Practically identical in every way.

You know, to see if it's already raining outside.

Grande and her crew had the infamous choreography down.

Brushing Your Teeth With A Hot Boy

The world's most mortifying experience.

TBH, we should all be making mix tapes for ourselves like Grande's version has.

Moping In Your Bedroom

Dancing It Out With Pom Poms

Sometimes you just have to jump on your bed and dance.

Another scene, another excellent choreography recreation by Grande.

There Was A Clovers Confrontation

But they eventually worked it out.

That feel when your childhood crush gives you a doll house and it makes you super sad.

Sitting With The Doll House On The Porch

And Playing With The Rooms

Ah, what could have been.

Showing Up At Harvard

In an iconic pink leather suit.

These scenes were shot 17 years apart and Coolidge's character looks exactly the same. Can you believe?

The Bend And Snap

Studying On The Treadmill

With a sunset tapestry behind you, of course.

Sunbathing In Pink Fur With A Dog

The UPS Guy Got A Name Change

The float from Elle Woods' Harvard application video is ressurected in Grande's video for her pooch.

Grande's middle name may as well be "Attention To Detail" because "Thank U, Next" was the best homage any 2000s iconic film could want.