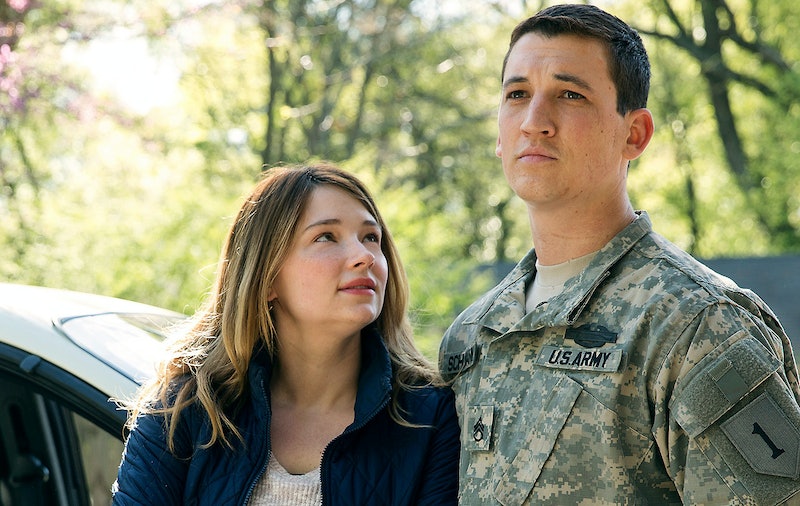 In 2017, the reality that Post Traumatic Stress Disorder (PTSD) affects many people is impossible to ignore. And yet, many movies about the modern military or current U.S. battles tend to skirt over how soldiers cope with PTSD in favor of showcasing wartime heroics. The new film Thank You For Your Service, however, bucks this trend completely, and not just by tackling PTSD in a way few other films ever have — Thank You For Your Service also exposes the long, difficult road to recovery.

When Adam (Miles Teller), Solo (Beulah Koale), and Will (Joe Cole) come home from serving in Iraq at the beginning of the film, they're all aware that things aren't quite what they used to be. After getting hit with an I.E.D. and suffering losses, the brothers in arms return to find their entire lives aren't as comfortable as they thought, sending all three of them down a PTSD rabbit hole. This might not sound like anything new for audiences who have seen films like American Sniper, but where Thank You For Your Service diverges from the PTSD-centric war movies that came before it is in showing how soldiers actually go about treating their PTSD.

Spoilers ahead. After Will shoots himself in the head early on in the film, Adam and Solo are quick to identify their PTSD, however hesitantly. "I'd rather be a hero with my ass blown off than this sh*t," Solo tells Adam after Will's funeral. He knows he's injured from the war, but his wound isn't visible, and even he doesn't want to call it what it is. It's a heartbreakingly authentic portrayal of mental illness, showcasing the notion that you can know something is wrong, but not know how to fix it or where to start.

The first hurdle for Adam and Solo to get past when it comes to treating their mental illness is both very simple and hugely complex: the army itself. More specifically, it's the toxic masculinity that can be reinforced by the institution. Even when it's just the two men alone in the middle of the woods, Adam and Solo can't actually say the words "Post Traumatic Stress Disorder." Their fear of letting any perceived weakness show, even to the people they are closest to in the world, is indicative of not only the stigma surrounding PTSD, but also the dangers of the mindset instilled in men (especially soldiers) that any kind of mental illness is a weakness.

This point is explored further at the V.A., when a colonel Adam used to work with sees him waiting in line to sign up for benefits regarding mental health and tells him that he is setting a bad example to the young men in his unit and beyond. Seeing him ask for help is, in the colonel's eyes, "bad for Big Army." Luckily, Adam is able to brush off the comments and keep going in search for help, but it's clear that the colonel is meant to represent the larger military conglomerate and society as a whole.

And even when Adam and Solo move past this, they encounter more struggles. Unlike in other films, which often depict a character recognizing his/her problem and deciding to get help as a happy ending, Thank You For Your Service takes great pains to depict that that's only the start. In this movie, as in real life, getting help can include long waiting times at the bureaucratic nightmare of the V.A. For Adam and Solo, multiple trips end in them being told they'd get to see a doctor in six months at the earliest. Even when a V.A. worker offers to see Solo during her lunch break, it's clear there's still a long road before he can receive benefits and get treatment.

This is where Thank You For Your Service truly sets itself apart. It doesn't relish in a forced dramatic downfall or teary therapy sessions, giving in to PTSD cliches. Instead, it draws back the curtain on the mundane and tiresome process that is often getting help for mental illness. It's not glamorous, but it is real and necessary for any audience members who are struggling with PTSD or other mental illnesses in silence. By depicting the long and hard process of getting help, Thank You For Your Service actually ends up giving help itself to those most in need.