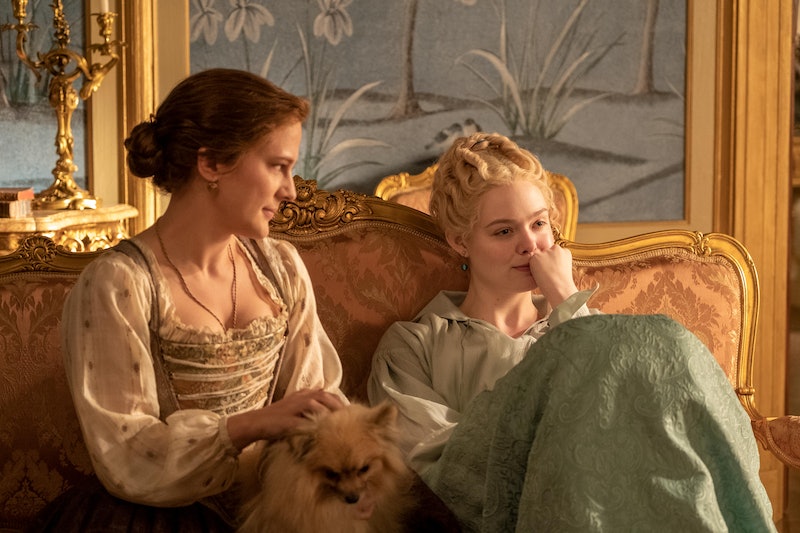 Catherine the Great's 34-year reign in Russia was as full of rumors as it was long. And if you were wondering why characters keep talking about Catherine the Great having sex with a horse on Hulu's The Great, it's because that was one of the many lewd rumors that were spread about her during her reign. These outlandish claims about her sex life were often made up by enemies to discredit and embarrass her in front of the court. This is not all surprising, considering that many powerful women in history have been subjected to rumors of sexual deviance: Marie Antoinette, Cleopatra, the list goes on.

Catherine came to power by overthrowing her husband in a coup, so needless to say, the men of 18th-century Russia were not exactly pleased. But despite the dissenters, she used her reign to bring the arts and sciences to Russia, ushering it into a golden age. Yet for many, the infamous horse rumor comes to mind before anything else. For a full breakdown of the salacious rumors that were spread about Catherine the Great, read on...

1. She was a nymphomaniac

History loves to punish a woman who enjoys sex. While Catherine did take on lovers over the course of her reign, it was within reasonable measures. There are about 12-20 recorded lovers, and most of her affairs lasted a few years. The only thing she was guilty of was being a romantic, once writing in her journal: “The trouble is that my heart is loathe to remain even one hour without love.” Since her husband was a violent alcoholic and having lovers was common practice at the time, you’d be hard pressed to claim that she was a sex freak.

Our ruling: Exaggerated, at best.

2. She spoiled her lovers rotten

Catherine was a smart woman whose natural sense for politics extended into the bedroom. Her lovers were often generals, rich nobles, and admirals, which resulted in politically advantageous relationships. As thanks, she would often give them gifts such as palaces, titles, land, and servants (one was even installed as King of Poland to maintain a relationship with the country).

3. She killed her husband

A letter from Alexey Orlov, Catherine’s favorite who had been keeping Peter imprisoned after the coup, claimed that he was killed accidentally during a fight caused by a tantrum (he was known to have many). Others think he was strangled by Orlov. Though Catherine was not thought to be directly involved in his death, the Russian people were certainly not happy with her.

Our ruling: Not officially true and likely not technically true, but Peter's death was certainly convenient and helpful to Catherine.

4. She had a sex room filled with lewd furniture

One of the stranger legends surrounding Catherine the Great is that she had a secret room made especially for spending nights with Platon Zubov, her 22-year-old lover. The furniture was said to be adorned with male and female genitalia. In 2017, a table presumed to be from this room was sold at Sotheby’s, but there are no records or evidence that the room actually existed.

Our ruling: Jury's out.

5. She died having sex with a horse

The story goes that Catherine suspended a horse above her with a harness so she could partake in some bestiality. When the harness broke, the horse crushed her to death. In reality, Catherine the Great died of a stroke on Nov. 17, 1796.

Catherine the Great's legacy is a complicated one, but if these rumors indicate anything, it's that her enemies tried everything they could to undermine her. Despite their best efforts, she's still considered one of Russia's most influential rulers.

More like this
'Ramy' Will “Probably” End With Season 4, According To Ramy Youssef
By Brad Witter
Here’s Where You Can Stream 'Schitt's Creek' After The Comedy Leaves Netflix
By Brad Witter
'Reservation Dogs' Season 3 May Finally Mend Bear & Willie Jack’s Relationship
By Gretchen Smail
The 'Reasonable Doubt' Cast Includes A 'Save The Last Dance' Reunion
By Grace Wehniainen
Get Even More From Bustle — Sign Up For The Newsletter