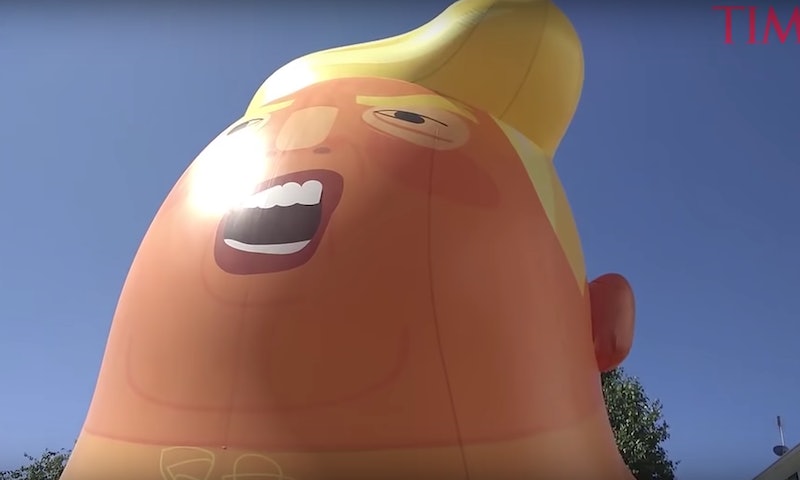 While Trump is traveling through Europe, he has one particularly exciting thing to look forward to: a giant Trump baby balloon in London and possibly Scotland. According to BBC, this massive balloon (which looks not unlike the blimps for the Macy's Thanksgiving Day Parade) has already been given clearance to fly over central London while Trump is in the UK, though it's been forbidden from flying over some of Trump's golf courses in Scotland. But honestly, if that balloon follows Trump all the way over to Scotland, the protesters' victory has already been accomplished.

The 20 foot tall balloon is just one of many protests being prepared for the presidents arrival in the UK. According to The New York Times, protesters were assembling to meet Trump long before Air Force One even touched down on London on Thursday afternoon.

Harley Day, 23, a student and one of the protesters at Regent Park, told The New York Times, "He needs to be called out. His bigotry, his sexism, his Islamophobia, his general xenophobia and crass inability to empathize.”

In response to the massive Trump baby balloon, Trump reportedly said to The Sun, “I guess when they put out blimps to make me feel unwelcome, no reason for me to go to London. I used to love London as a city. I haven’t been there in a long time. But when they make you feel unwelcome, why would I stay there?"

Later, he added, “Many people are delighted [with me]. I get thousands of notifications from people in the UK that they love the President of the United States. They want the same thing I want.”

He also claimed to be the most popular Republican in United States history, saying, "You know, a poll just came out that I am the most popular person in the history of the Republican Party. Beating Lincoln. I beat our Honest Abe...But the people of the UK, and I’ll bet if you had an honest poll, I’d be very strong. They want the same thing I want. I love the UK.”

According to BBC, Trump is set to play at the Turnberry golf course in Scotland, though the Trump baby balloon has already been banned from floating over the course while Trump is there. However, BBC reports that police said it was possible to float the balloon elsewhere in Scotland, besides the golf course.

Clearly there is a significant protection operation in place for the president and this includes restrictions to the airspace in the Turnberry area. We need to ensure there is a balance between protection and public safety and the public's right to peacefully protest. With that in mind and on this occasion we are unable to grant permission for the balloon to fly in that area, however we are in discussion with the applicants about possible alternatives.

The Trump baby balloon was truly a community effort by the people of London. It was crowdfunded over a month ago, blowing through its $16,000 goal. On the crowdfunding site, the campaigners explained that they were going to use the surplus money to send the Trump baby balloon off to Scotland:

After a lot of discussion about what would be most in keeping with the spirit of why people have been donating to this project, we've decided that the very best thing we can do with the surplus is to send #TrumpBaby out to follow little Donald around the world on his diplomatic demolition derby. Wherever the orange sex pest goes, #TrumpBaby will not be far behind, haunting the skies - and hopefully the dreams - of the stain on the office of President that is Donald Trump Senior.

It was London Mayor Sadiq Khan who finally approved the flying of the balloon as a peaceful protest, one week before Trump was set to arrive in London — and Trump had some choice words for Khan in response.