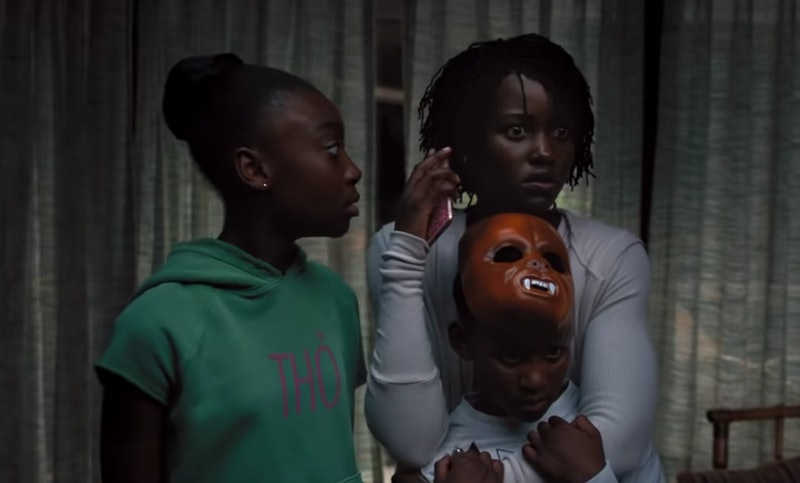 Major spoilers ahead for Us. Jordan Peele's latest horror movie, Us, follows a family that finds themselves in the midst of a hostile takeover. The trailers show parents Adelaide and Gabe (Lupita Nyong'o and Winston Duke) and their two small children beset upon by a creepy family dressed in red who look just like them, but the how and the why were kept pretty well concealed until the movie's release. Out of all of the many, many, terrifying reveals and surprises in Peele's follow-up to Get Out, the 13 scariest moments in Us are what will be replaying in your head long after you leave the movie theater.

Fans of Jordan Peele's 2017 hit horror flick, Get Out, may have gone into Us expecting another movie that's a blend of social commentary with horror, but Peele has been upfront about the fact that the two movies are totally different in plot. Back in 2017, Peele famously tweeted, "Get Out is a documentary," and, just a few days ago tweeted, "Us is a horror movie." While the storyline of Us isn't related to Get Out, nor do the movies share any characters, the filmmaker revealed to Entertainment Weekly that the concept of us Us also is inspired by a real-life threat. "I think the main idea that went into writing this film is that we’re our own worst enemy, and that idea created this monster, The Tethered," Peele said.

Even if you indulge in self-sabotaging behavior, you're not likely to ever experience the kind of evil-double horror that unfolds in Us. Here are some of those most terrifying moments of Peele's second feature: