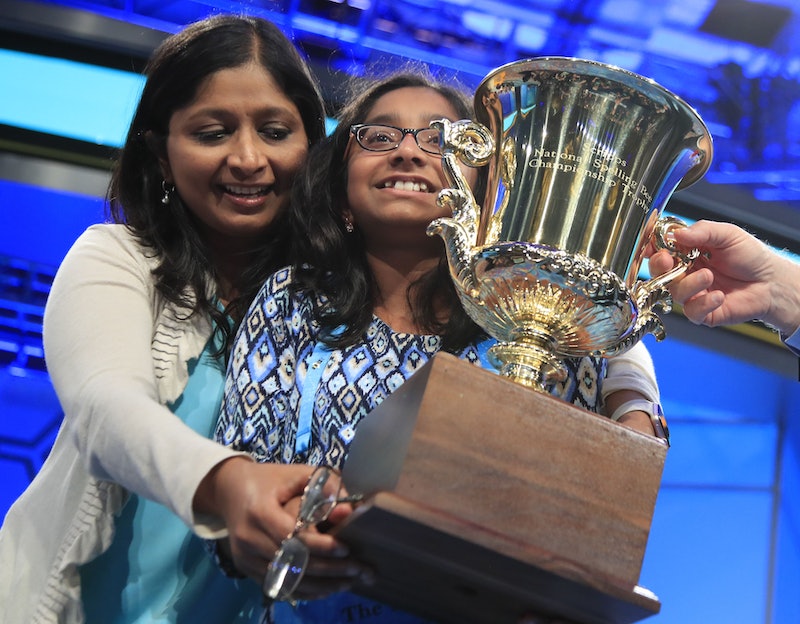 The annual Scripps National Spelling Bee is anything but child's play. Though the competitors are no older than 15 (and some are as young as 6!), these tiny wordsmiths endured hours upon hours of rigorous training to familiarize themselves with words that the average human has probably never even heard of. This year's event featured an array of fancy words you can put in your back pocket to impress all of your friends, and the 2017 Scripps National Spelling Bee winning word was "marocain."

"Marocain," 12-year-old Ananya Vinay said confidently in the intense championship round after her competitor misspelled his word just moments before. "M-a-r-o-c-a-i-n."

And, just like that, the young girl from Fresno, California, clinched the National Spelling Bee title. Marocain is a word of French origin that describes a type of dress fabric; but to Vinay, it will always mean victory.

The second-place winner, 14-year-old Rohan Rajeev, misspelled the word "maraam" in the final round of the competition.

Fifteen aspiring spelling bee champions filled the Gaylord National Resort and Convention Center in Maryland on Thursday after advancing to the final round of the annual competition. Just as anyone could have expected, they were greeted with some pretty unique and exotic words, like "phthirophagous" and "bautta."

Of course, a competition like Scripps, which attracts only the best and brightest of the nation's spelling wizards, is known for expanding our vocabularies with new words each year. Often, it is the winning words that stick in our memories the most. And yes, I did say "words," not "word." For each of the three previous years, the competition has ended in a tie, ending only after the last two competitors standing have exhausted the list of pre-determined words that officials can ask them to spell.

Last year, 13-year-old Jairam Hathwar and 11-year-old Nihar Janga were declared co-champions after correctly spelling the words "Feldenkrais" — a type of exercise therapy designed to reorganize connections between the brain and body — and "gesellschaft" — a kind of social relationship based on impersonal ties. To be honest, I've been staring at these words for five minutes and still don't think I could recite their spelling by memory.

In 2015, 14-year-old Gokul Venkatachalam aced the spelling of the word "nunatak," which is a hill or mountain surrounded by glacial ice, while co-champion Vanya Shivashankar correctly spelled the word "scherenschnitte," which is the art of cutting paper into decorative designs.

Not many things are certain in life. But what is certain is that the Scripps National Spelling Bee will teach you some pretty cool new words each year, though you may or may not remember how to spell them.