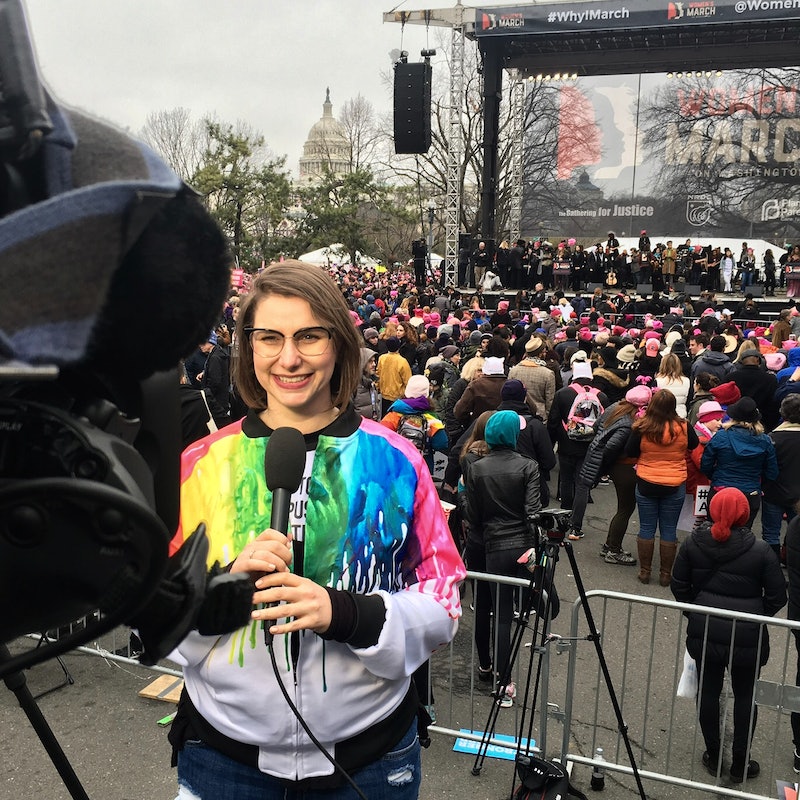 This weekend marks the one-year anniversary of the Women’s March on Washington, the largest single-day protest in U.S. history. For so many reeling from the outcome of the 2016 election, like me, the Women’s March was an electrifying moment. As evidenced in photos that quickly went viral around the world, we felt a sense of tremendous unity, as well as relief in the realization that we were not alone in opposition to the new president.

As a Democratic commentator, I spent Election Day on-air in my pantsuit and HRC T-shirt, talking about how her election would be a rejection of the hate and misogyny that Trump ran on. At 9:30 p.m., I left the Javits Center. At 11:30 p.m., I was texting with a TV producer who was personally frightened for what a Trump presidency would mean to his LGBTQ family. At 12:30 a.m., he asked me to come back to the studio to go on air. I had enough sense to decline and not become the anti-Trump commentator who broke down crying on-air. But the announcement of the Women’s March changed that feeling. I was not alone.

I wasn’t just going to march — I was going to get involved.

As a member of the policy committee for the Women’s March 2017, I was honored to help shape the guiding principles for the event. The belief that women’s rights are human rights and human rights are women’s rights — the anchor tenant for uniting the 2017 March — is the root of so many other issues, including civil, worker, LGBTQ, and reproductive rights.

I have been in the progressive movement for over a decade, and my time spent with the women on this committee was one of the most positive organizing experiences I have had. Everyone was there because they wanted to be part of a vision for an inclusive America.

"If the political circus of the last 12 months has showed us anything, it’s that the distinction between Democrats and Republicans has never been more clear."

During the march itself, I marched with a group who had never met before. It was friends who had invited friends, but we immediately felt like family. A few blocks in we picked up a man in his 40s, who at first we swore was a Trump-supporting infiltrator. After a little while, we learned he came in with his wife from rural West Virginia for the same reason the rest of us did: to be part of an inclusive America. His wife had to take a break walking, but encouraged him to keep marching because they finally felt like they found a place where they belonged.

Overnight, the protest became a symbolic moment of hope. Our questions about why we were marching became the foundation of our platform. In my work as the campaign director for the Center for American Progress Action Fund, I regularly advocate on the very issues we marched.

If the political circus of the last 12 months has showed us anything, it’s that the distinction between Democrats and Republicans has never been more clear: those who are willing to stand up to the presidency of Donald Trump versus those who are complicit, either by their actions or their silence.

To be clear, those are the only sides.

To those who say Democrats are in crisis with no message, I point to the unity that was showed against repeated attacks to take away health care, opposition to the "give away to the rich" tax bill and standing up for immigrant communities.

If our efforts in the year since the Women’s March have been about sharpening and defining where Democrats stand on issues, 2018 is about closing the deal. Many of us will mark the anniversary of the Women’s March by renewing our solidarity and marching once again for what we believe in. To bring about real change, we must focus our attention and efforts on the number one priority this year — winning elections up and down the ballot.

More women are running for elected office than ever before, but we need women to turn out in masses to cast their vote and ensure victories that can alter history for the better. Think the Alabama Senate race was a fluke? I think the 92 percent of black women who carried Sen. Doug Jones to victory would disagree. When we vote, we win. When we organize, we win. When we run on principles, we win.

In particular, gubernatorial and state legislative races will be key to redrawing the maps in 2020 and putting the power back in people’s hands. Control of the House of Representatives is well within our reach, and will realistically be decided by a small number of races in swing districts.

But if we fail in our efforts to win key seats in state legislatures and critical governor's races, then we ensure the status quo or worse. We are winning every day; even in the special elections held this Tuesday, Democrats picked up critical Wisconsin state senate seats that have long been held by Republicans. Even those who don’t live in key districts can support progressive candidates through groups like Swing Left, Emily’s List, and VoteVets.

Many women across the country will take to the streets and show up at Power to the Polls this weekend to honor the one-year anniversary of the Women’s March on Washington. Whether you plan to be among them or not, I encourage you to take a moment to reflect on our achievements in 2017 and recommit in 2018. So, put on your pink “pussy hats” and bring your signs — but don't forget to bring a voter registration form with you.

Editor's Note: This op-ed does not reflect the views of Bustle Digital Group and is part of a larger, feminist discourse on today's political climate.

More like this
Iran Has Issued A Death Sentence Over Mahsa Amini Protests
By Catharina Cheung, Darshita Goyal and Maxine Harrison
Joe Lycett Just Took HIs David Beckham Qatar Protest To A Whole New Level
By Sophie McEvoy
Amanda Gorman Shared A Powerful Message On Meghan Markle’s Penultimate Podcast
By Darshita Goyal
Footballer Jake Daniels Shared His Thoughts On A World Cup Boycott
By Sam Ramsden
Get Even More From Bustle — Sign Up For The Newsletter