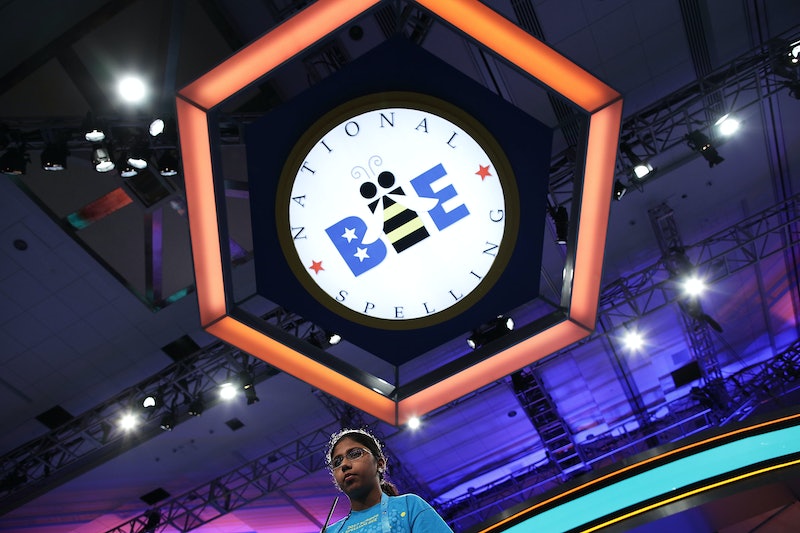 Undoubtedly one of the most highly anticipated events of the year, the final round of the Scripps Spelling Bee aired on Thursday and a new winner has officially been crowned. Only 16 of the record breaking 516 spellers remained to compete in the finals, but McKinney, Texas' Karthik Nemmani came out on top with the 2018 spelling bee winning word "koinonia."

The word "koinonia" means the "the Christian fellowship or body of believers" or "intimate spiritual communion and participative sharing in a common religious commitment and spiritual community," according to Merriam-Webster. It is of Greek origin and is a noun.

This year’s pool of spellers was exceptionally large thanks to the newly implemented RSVBee program, Vox reports. The program allowed spellers that didn’t qualify for the competition through a regional spelling bee to apply to the national competition anyway. They had to have won their school’s spelling bee or be a prior national finalist, though, Vox reported. Scripps accepted 238 out of the 855 applicants that applied through the RSVBee program, according to USA Today. And at least one of those 238 spellers accepted through RSVBee made it to the Thursday morning round.

“It’s really cool that the program exists,” 14-year-old Jake Faulk of Denver told USA Today. “It helps especially for states like Colorado where there’s just not a whole lot of opportunity for people to go, and yet there’s still a lot of good spellers there.”

But Faulk wasn't the only contestant who qualified through RSVBee to make it to Thursday. In fact, the winner himself landed a spot at the national bee through the test. “I had confidence, but I didn’t think it would really happen,” Nemmani said after winning, Dallas News reported. "I'm just really happy. This has just been a dream come true." And as USA Today noted, Nemmani said he knew he was going to win once he heard the word "koinonia" and immediately knew how to spell it.

In addition to acing the spelling of "koinonia," Nemmani correctly spelled "haecceitas," a term from medieval philosophy; "condottiere," a leader of mercenaries; "miarolitic," meaning "of igneous rock"; and "jagüey," meaning "any of several trees of the genus Ficus," according to the trusty Merriam-Webster dictionary. And his calm and collected nature made it all look pretty easy.

The same can be said for runner-up Naysa Modi. The 12-year-old, also from Texas, made it all the way to the final round of the bee, but eventually got tripped up on a word that's intimidating just to hear: "Bewusstseinslage." The psychology term of German language origin translates into "a state of consciousness or a feeling devoid of sensory components," per Merriam-Webster. 2018 marked her fourth year at the national bee.

"She's a really, really good speller. She deserved the trophy as much as I did,'' Nemmani told the press after he won, according to ESPN. "I got lucky.''

Ultimately, both contestants were incredibly impressive. And the camaraderie between them was both inspiring and heartwarming to witness.

Besides bragging rights for the next year, as the winner of the 2018 Scripps Spelling Bee, Nemmani will receive $40,000 from Scripps along with an engraved trophy, $2,500 from Merriam-Webster, a complete reference library, and $400 worth of reference material from Encyclopedia Britannica. In addition to that, Pizza Hut will host a pizza party at Nemmani's school and he will have the opportunity to appear on Live With Kelly and Ryan in New York and Jimmy Kimmel Live! in Los Angeles.

Regardless of the fact that there was only one spelling champion, though, all of the contestants should be proud for making it so incredibly far. It's surely an experience they'll never forget.

Hillary Crawford contributed to this report.