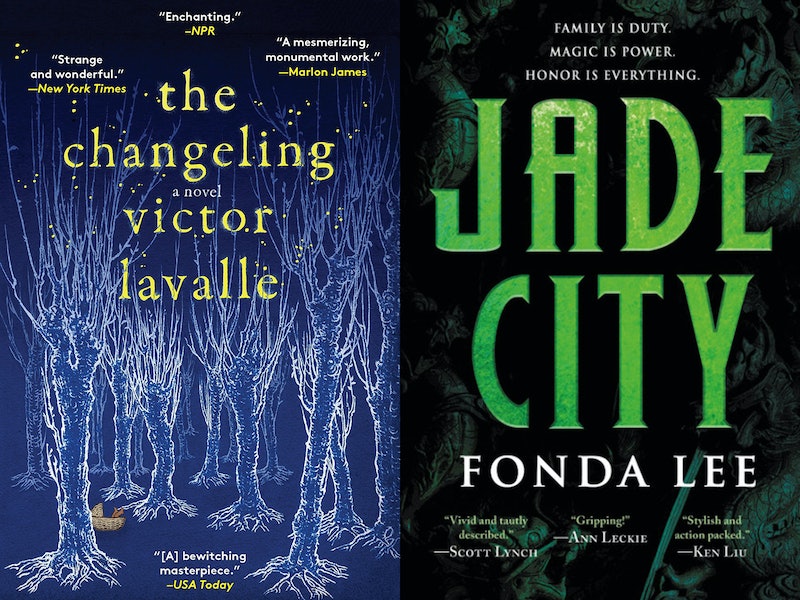 It isn't often that major literary awards come down to a tie, but that is exactly what happened in Baltimore on Sunday night at the World Fantasy Convention. When the 2018 World Fantasy Awards winners were announced, not one but two books were named Best Novel: The Changeling by Victor LaValle and Jade City by Fonda Lee.

I have never been on a literary award committee before, but I can imagine how hard it would be to choose just one winner out of an entire group of truly outstanding works. When you are presented with the best, how do you decide what is the best of the best? Do you pick the book with the most interesting plot, the most beautiful language, the most masterful world building? Is it something you can choose based on a logical system, or in the end, is it a gut decision?

Whatever the process is, one thing is for sure: It's difficult. That is why it is a little surprising but completely understandable that the judges behind the 2018 World Fantasy Awards couldn't pick between The Changeling and Jade City and instead decided to recognize them both with the Best Novel award.

Lee took to Twitter to share her excitement over winning the prestigious award, along with a picture of what is quite possibly the coolest looking award in literature. LaValle also tweeted about the shared victory, noting that The Changeling was "in terrific company."

Despite sharing the 2018 World Fantasy award for Best Novel and being excellent works of fantastical fiction, LaValle and Fonda's books could not be more different from one another. The Changeling follows a resolute father on an emotional and supernatural journey through the boroughs of New York as he searches for his lost wife and child. It blends elements of horror and fantasy to create a dark retelling of a classic fairy tale about parenthood, love, and obsession. Jade City, on the other hand, is a complex saga set in an Asia-inspired fantasy city where magic and kung fu thrive. It is also only the first in what promises to be an epic trilogy about power, honor, and family. Differences aside, both of these excellent novels deserve the 2018 World Fantasy Award.

In addition to one another, The Changeling and Jade City had stiff competition this year, including S.A. Chakraborty's celebrated Middle Eastern fantasy novel The City of Brass, Theodora Goss's literary horror and science fiction-inspired book The Strange Case of the Alchemist's Daughter, Daryl Gregory's Locus and Nebula Award finalist Spoonbenders, and award-winning author John Crowley's Ka: Dar Oakley in the Ruin of Ymr.

'The Changeling' by Victor LaValle
Amazon

Of course, The Changeling and Jade City were not the only winners at the 2018 World Fantasy Awards. Ellen Klages's Passing Strange was named Best Novella, and Natalia Theodoridou's "The Birding: A Fairy Tale" won Best Short Story. The night's other big winners included The New Voices of Fantasy by Peter S. Beagle and Jacob Weisman, which was awarded Best Anthology and The Emerald Circus by Jane Yolen, which took home Best Collection. Gregory Manchess, whose illustrations have appeared in magazine, in advertisements, on movie posters, and on over 60 book covers, was honored with the Best Artist Award. Author Charles de Lint, best known for his Newford series, and editor and publisher Elizabeth Wollheim were given Lifetime Achievement Awards for their "outstanding service to the fantasy field."

LaValle and Lee were the only two winners to share an award, but their tie does not make the achievement any less impressive. Both The Changeling and Jade City have certainly earned the title of Best Novel in the fantasy world, and a spot on your winter reading list.