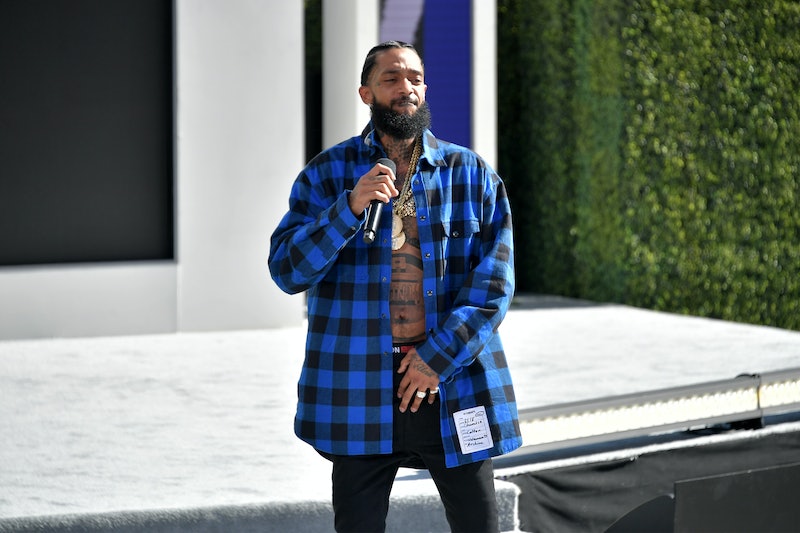 Nowadays, awards shows and ceremonies have gotten a lot more creative with their red carpets, especially because a lot of them aren’t actually red. And this year, the 2019 BET Awards featured a blue carpet to honor the late Nipsey Hussle. It’s sentiments like these that make awards shows all the more special in 2019, especially seeing as this particular program is all about celebrating black excellence.

The late rapper was often known to wear the color blue for many of his performances. Nipsey even wore the color for BET’s 2018 pre-show during his performance. “Our red carpet is actually blue,” BET Awards pre-show host Terrence J. announced to the audience while on-air. “We did the entire carpet blue in honor of our fallen brother, Nipsey Hussle.”

But not only is Nipsey being remembered by the seams of the blue carpet, but he’s also an honoree for the Humanitarian Award for all his work in supporting L.A. communities. In February, Hussle and a business partner invested in the plaza where he frequented as a child, and where he sold mixtapes early in his career. But sadly, just a month later, on March 31, Nipsey was fatally shot outside his clothing store The Marathon in Los Angeles.

In many instances, the rapper used his own earnings from his craft to fuel opportunities for released prisoners and people who were previously homeless, by creating spaces such as a coworking building, a barbershop, and multiple restaurants.

To show even more gratitude for Nipsey’s grind, there will also be an upcoming star-studded tribute performance featuring DJ Khaled, YG, and John Legend during tonight's show. With all that said, it's quite clear that Nipsey has left an unforgettable mark as a philanthropist in the lives of those who witnessed his journey.

A few days after the tragic incident, Nipsey's partner, actress Lauren London, wrote her dedication in tattoo ink, posting a photo of the black and white tattoo portrait of Nipsey's face all over her arm via Instagram. London even left a powerful caption under the photo, reading, "Real Love Never Dies. When you see me, you will always see him."

Many other celebrities, including sports star Lebron James, showed support as well. James publicly wore a Nipsey shirt and even called on Crayola to rename a blue hue crayon "Nipsey Blue". While Clippers player Montrezl Harrel shared his condolences by wearing the artist's name on the sides of his sneakers during a game.

Even the youngest of stars, like 11-year-old Little star JD McCrary, wore a "R.I.P. Nispey Hussle" blazer to the premiere of the film in April.

On the night of the shooting, Jada Pinkett Smith wrote on Instagram, "My heart bleeds for all those who love him. Stay strong @laurenlondon. He's an angel on your shoulder now." And reality star Kim Kardashian paid her respects via Instagram story, writing that she's sending "so much love & prayers" to London.

Following a montage of celebrities like Snoop Dogg to close friends describing how Nipsey contributed to his community, his entire family accepted his Humanitarian Award, including his children, partner London, mother, father, and grandmother.

Nipsey lives on through his daughter, as well as his son with London, and surely will always be honored by BET.