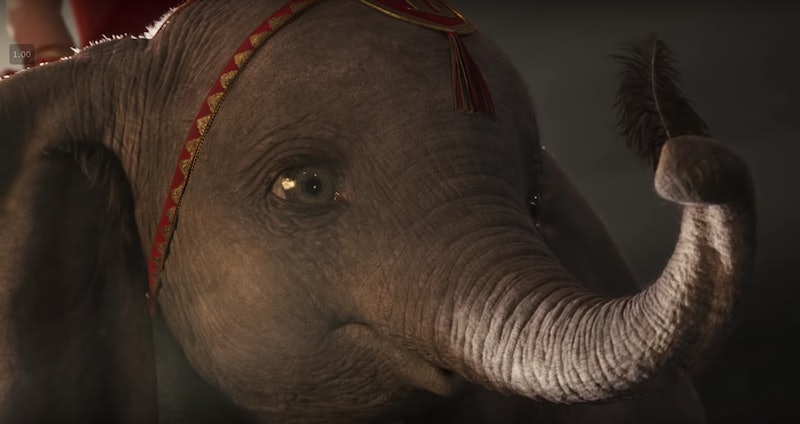 The Lion King and Aladdin are to come later this year, but Disney's live-action Dumbo, a new take on the tale of the lonely little elephant whose big ears let him soar, is nearly here. This version of the story, out Mar. 29, is directed by Tim Burton, and stars Colin Farrell as Dumbo's caretaker, Michael Keaton as a ruthless entrepreneur, Danny DeVito as a circus ringmaster, and Eva Green as a trapeze artist, among others. Disney's animated classics are loved as much for their sound as their style, and the 1941 original Dumbo is no exception. How will the new 2019 Dumbo soundtrack speak to a new audience?

Dumbo's film score marks the 17th collaboration between Burton and stalwart composer Danny Elfman. "It’s just one of those chemistry things," Elfman said in a press release. "It’s all about finding the tone of the world [Burton's] creating...Dumbo is a very heartfelt story." The composer continued, "We knew we would have to find a musical identity for Dumbo that was purely Dumbo. Tim wanted me to find a very simple theme because he feels it’s a simple story.”

Interestingly, the first piece of music most fans heard from the new film likely won't make it to the official soundtrack. The song used for the trailer was a cover of "Baby Mine" (from the original film) by Norwegian singer-songwriter Aurora. Earlier this month, Disney released the Arcade Fire version of the same song that will play over Dumbo's end credits.

In the press release, Arcade Fire's Win Butler shared his deeper personal connection to Dumbo. "There is a scene with a locomotive in the original Dumbo that uses an instrument called the Sonovox that my grandpa Alvino Rey made famous in the 1930s," He explained. "When we were asked to do the [end credit version of "Baby Mine"], I immediately got all of my grandfather’s old guitars." In working on the song, Butler merged past and present. "My mom plays the harp on the track, my brother the theremin, my wife sings and plays drums, and our son even plays the triangle, as well as the rest of our 'family' in Arcade Fire. I will forever relate to the song thinking about the people I hold so dear that are 'so precious to me.' Listen for the cameo of my grandpa Alvino’s famous Sonovox at the end.”

In the original film, "Baby Mine" was sung to Dumbo by his mother in one of the film's sweeter, sadder scenes. In the new Dumbo, circus mermaid Miss Atlantis (played by Scottish actor Sharon Rooney), isolated from the rest of the troupe by her tank, sings the song to a lonely Dumbo.

"Baby Mine" was nominated for a Best Song Oscar in 1941, but lost to "The Last Time I Saw Paris" from Lady Be Good. However, one of the song's composers, Frank Churchill, won the Oscar for Scoring of a Musical Picture for the rest of Dumbo's music. That's a lot for any new soundtrack to live up to and in a Collider interview, Elfman acknowledged the challenge. "Well, who isn’t, in some level, a fan of the original? But I knew this would be very different...I know that I’m gonna want to touch on a few of the melodical riffs from the original, just to pay tribute in some moments. It’s a classic, but on the other hand, this is a movie and not the animated film, which was real simple and basic. That was a different thing."

Dumbo's soundtrack acknowledges its past while creating a new sound for the present. It'll be available digitally on Mar. 29 (the same day the movie comes to theaters) and on CD Apr. 5.