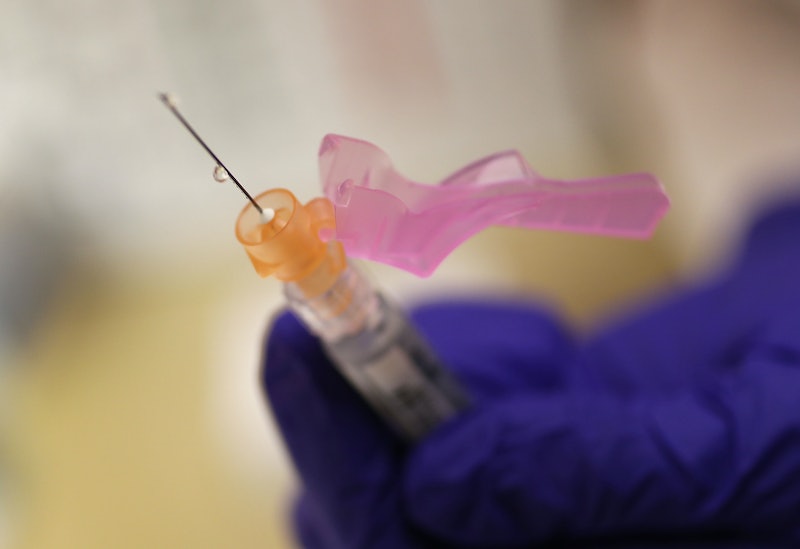 According to U.S. health officials at the Centers for Disease Control and Prevention (CDC), the 2019 flu shot is only 47 percent effective at fighting this year's strain of the flu. Though that might sound like a low success rate if you hear it out of context, that's not actually the case: According to the Associated Press, the CDC is generally pleased so long as the shot proves effective at least within a 40 to 60 percent range — and 2018's last year's flu shot was only considered to be 36 percent effective. So, within these perimeters, the flu shot is actually doing pretty good this year.

The job of the flu shot is not to eradicate the flu, it's to reduce the number of people who develop hospital-grade flu symptoms and decrease the amount of critical cases or deaths that come from the flu virus. Aka, the vaccination can be the difference between a few crappy days on the couch and a few weeks in the hospital. So even if the flu shot does not keep you from developing the flu after coming into contact with the virus, its effectiveness might still be considered positive, depending on the severity of the symptoms you develop. Plus, the effectiveness of the vaccine directly correlates with the age of the patient.

What's most important is that the majority of people who get the flu vaccine and then go on to contract the flu virus will not suffer as severely as they would have without getting the virus (couch vs. hospital bed, again). So this news should not deter you from getting the vaccination. In their report, the CDC also shared a prediction that the peak of flu season is still yet to come in 2019, and that more cases will be expected to arise over the next few weeks and into the month of March, at least. The CDC stresses the importance that medical providers to continue to encourage their patients to get vaccinated, as it's never too late to protect yourself from a potentially dangerous disease, especially if you are already dealing with other illnesses that could be fatally exacerbated by a bout of influenza.

If you've been lagging on making a flu shot a priority, reconsider, because it's not too late to get one just yet. Punxsutawney Phil might have predicted an early spring, but the CDC is predicting a late flu season, so it's better to be safe than sorry — go out and get your flu shot if you haven't already. To make things easier for you, the CDC provides a "find a flu shot" widget on their website that allows visitors to find a location near them where they can get the vaccination for free, or at least on the cheap. If you have health insurance, you're likely covered completely, but if you don't have health insurance you can still find a free flu shot. Yes, it's incredibly easy to get a flu shot, so take advantage!

More like this
This Psychological Effect Might Be Keeping You From Hitting Your Goals
By Lexi Inks
I Tried The Ice Barrel's Cold Therapy Tool & Now I Like Ice Baths
By Allie Flinn
Got Brain Fog? Here Are The Best Supplements For Memory & Cognition
By Carolyn Steber
Rachel Zegler Reveals She Had Breast Cancer Scare
By Radhika Menon
Get Even More From Bustle — Sign Up For The Newsletter