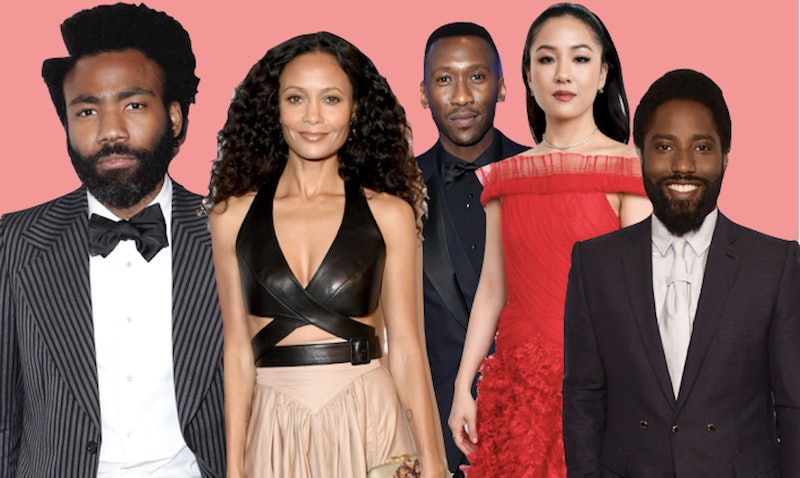 The 2019 Golden Globes didn't just talk the talk, they walked the walk — or, well, they walked as much walk as they could considering their limited selection of non-white and non-male nominees. The year's Globe winners actually were pretty diverse. But while the 2019 Golden Globes might have been a win for diversity, it's important to remember that this night, just like everything else in Hollywood, is fleeting. Progress is a constant battle, and one Golden Globes doesn't mean we don't have to work to continue to make Hollywood a diverse and safe space.

The 2019 Golden Globe nominations were initially praised for their (relative) diversity. Despite only nominating 13 actors of color out of a total of 60 acting nominations — that's about 20 percent — it's true that the Hollywood Foreign Press did usher in a record number of diverse nominees this year, making history in multiple categories. And it was undeniably wonderful to watch some of those diverse nominees actually became winners. Spider-Man: Into the Spiderverse won the very first award of the night, for Best Animated film. And, though there were plenty of white men accepting the award on the stage, one of the only black creatives on stage, Spiderverse co-director Peter Ramsey, took the mic to emphasize that his film is meant to prove that anyone can be behind the mask. That said, you might have missed it — he was unceremoniously played off seconds after beginning to speak. (Ramsey finished his speech backstage.)

It wasn't until well over an hour later that the night welcomed its second winner of color: Regina King, who took home the Golden Globe for Best Supporting Actress for her work in If Beale Street Could Talk. King used her time onstage to pledge to produce projects with 50 percent women (it's unclear whether she means employed on set, or in leadership roles). Her victory was quickly followed up by wins for Sandra Oh (Best Leading Actress in a Television Drama), Darren Criss (Best Leading Actor in a Limited Series), and Mahershala Ali (Best Supporting Actor). And that wasn't the last of the major wins for artists of color. Later in the night, Mexican director Alfonso Cuarón won Best Director for his film Roma, which also won Best Foreign Language Film, and Rami Malek, who is of Egyptian heritage, took home the award for Best Actor in a Leading Role in a Drama.

These victories are exciting, no doubt. But they are also temporary. Oh, a trailblazing actor in her own right, made this very point in her opening monologue. "I said yes to the fear of being on this stage tonight because I wanted to be here to look out into this audience and witness this moment of change," she said. "Next year could be different. It probably will be. But right now, this moment is real."

Oh's was arguably one of the biggest diversity victories of the night, winning the Globe for Best Actress in a Television Series Drama (she was the first Asian woman nominated in the category since 1980) and becoming the first Asian host of a major Hollywood awards show. But she knew what we all should keep in mind: one year of diverse nominees and diverse winners does not mean that racism in Hollywood is over, or that everything is fixed. Next year could very well be different, and that means we must continue to fight to be heard and recognized.

Cuarón, another groundbreaking winner of the night, knows this too. When the 2019 Golden Globe nominees were announced, the director commented on the apparent diversity of the nominees, telling The Wrap, "I wouldn't say the doors have opened for diversity. I'd say diversity broke the door down." Cuarón's comments, while inspiring, also reveal an undeniable truth about the Hollywood powers that be: they're not going to make an effort to be more diverse on their own, it's the filmmakers and audiences who have to make it happen.

It's also worth noting that one of the most successful films of the night was not BlackKklansman or Roma, but Green Book, a movie about segregation directed and written by white men. The movie took home the award for Best Motion Picture — Musical or Comedy (beating fan favorite Crazy Rich Asians), Best Supporting Actor for Mahershala Ali, and Best Screenplay. It was also nominated for Best Lead Actor in A Comedy and Best Director. The film, sold as an uplifting tale about an unlikely friendship between a black pianist, Dr. Don Shirley (Mahershala Ali), and his white driver, Tony 'Lip Vallenlonga (Viggo Mortensen), in the '60s, has been the center of much controversy. Specifically, it has been critiqued as telling a black man's story through a white man's lens (literally and figuratively), and a distorted lens at that. The film, which claims to tell a true story of friendship between these two men, has recently been called out by Shirley's remaining relatives as an inaccurate portrayal of true events. And Farrelly's sanctimonious acceptance speech, in which he called on everybody to "find common ground" didn't help matters.

And Green Book wasn't the only example of the Golden Globes taking one step forward and two steps back. The night's other Best Picture winner, Bohemian Rhapsody, was also helmed by white men, including the notably absent director Bryan Singer. Singer has been accused of sexual misconduct with minors, and his lingering presence is a direct contrast to the Time's Up movement.

There were plenty of amazing, groundbreaking, and hopeful wins at the 2019 Golden Globes. There were also plenty of disappointing wins and losses. The fight for more diversity in Hollywood is not over. And we'd be fools to think that one night is enough to counteract a century of racism, sexism, ableism, and colorism in film.