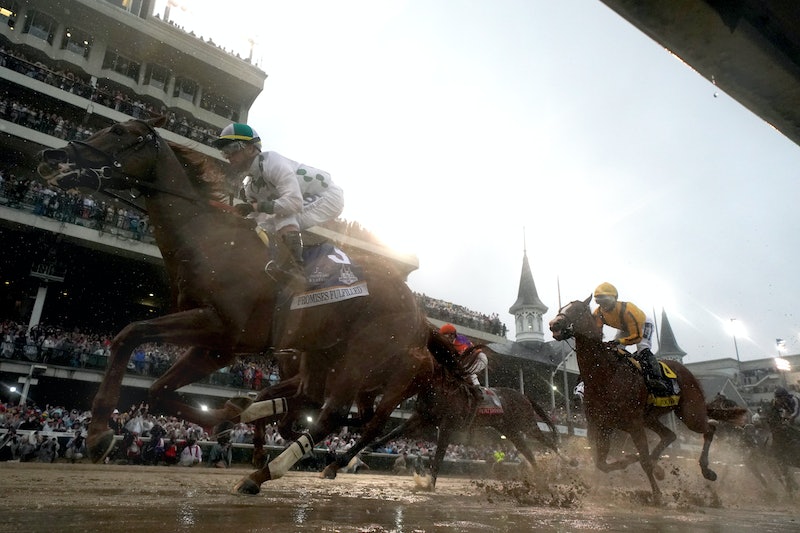 On Saturday, some of the world's favorite — and priciest — horses raced against each other in the 145th Kentucky Derby. People around the country placed their bets to see if they could predict which horse would take home the prize, and many of them were probably relieved when they thought that the 2019 Kentucky Derby winner was Maximum Security. But after a dramatic turn of events, the horse was disqualified, and Country Horse was named the champion instead.

It was a rainy day with the muddy track officially being declared "sloppy," but Maximum Security made it through and was initially declared to have finished the Kentucky Derby first. However, an objection by Country Horse’s rider led to an instant replay, and upon review, officials disqualified the horse, reversed the win, and named Country Horse the first-place winner instead. The rider claimed Maximum Security had bumped his horse.

The third place horse was Code of Honor.

Ahead of Saturday's race, The Washington Post, CBS Sports, and USA Today all predicted that Improbable, Game Winner, and Roadster had the best chances of winning the latest installment of the Kentucky Derby. All three horses belong to Bob Baffert, a Hall of Fame trainer whose horse Justify won the race just last year. However, not all of the favorites were Baffert's horses; according to NBC News, Tacitus and Maximum Security also saw great odds prior to the race.

There were a couple of other favorites going into the race at Churchill Downs, but they were scratched from the lineup earlier in the week. Omaha Beach, who won the Arkansas Derby and Rebel Stakes, was removed from the race Wednesday night due to an entrapped epiglottis, per The Washington Post. Another favorite, Haikal, was also scratched on Friday morning after developing an abscess on his left foot.

There was a lot at stake as the horses raced against each other on Saturday. According to Sporting News, the 2019 purse for the Kentucky Derby saw a significant increase; it totaled $3 million, up from $2 million in all the years since 2005. The winning horse walked away with a 400-count garland of roses, while its owner received 62% of the purse, totaling $1.86 million this year. This is more than twice the payout for other Triple Crown races, per Sporting News.

It's a pretty exceptional feat when the same horse wins all three races and achieves the Triple Crown. The last two horses who managed to do this both belonged to Baffert — American Pharaoh in 2015, and Justify last year. Before that, no horse had managed to win all three Triple Crown races since 1978, when Affirmed successfully did so.

Celia Darrough contributed to this story. This post has been updated.