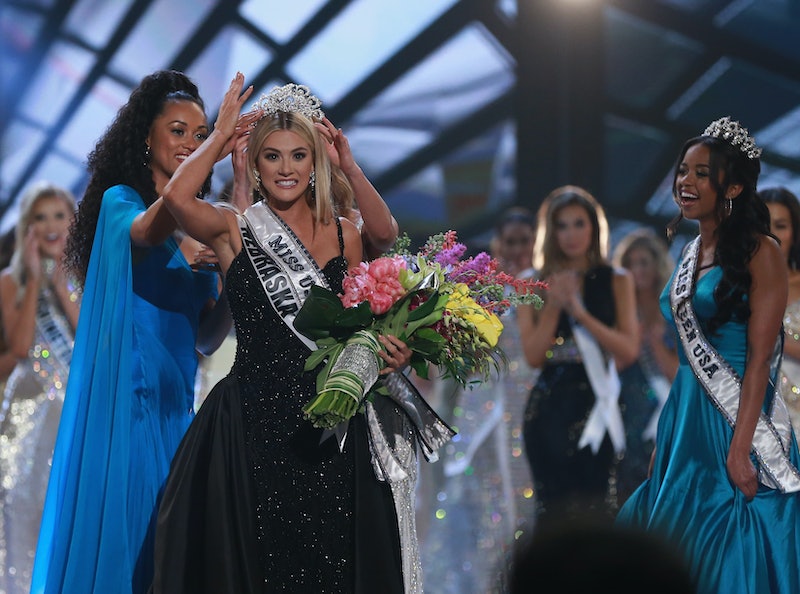 America's biggest pageant is just around the corner, and so is the crowning of a new Miss USA. But a gilded tiara barely scratches the surface of the full Miss USA prize. The winning woman isn't just rewarded with a sparkly new headpiece — Miss USA also wins a luxury lifestyle and a life-changing platform.

This year's competition will be held in Reno Tahoe, Nevada at The Grand Theatre at Grand Sierra Resort, according to the pageant's website. The event will take place just days following the April 29 crowning of Miss Teen USA, Kaliegh Garris. It will be hosted by Vanessa and Nick Lachey, and include musical performances by Nick and rapper T-Pain.

Aside from the massive exposure, networking opportunities, and prestigious title, last year's crowned Miss USA, Sarah Rose Summers, won a list of privileges including a luxury apartment in New York City, a year's salary plus living expenses, a personal stylist from the Miss Universe Organization, travel accommodations, and "access to various New York City events including casting opportunities, movie premieres, fashion week, sporting events and career opportunities," per the pageant's website. The event invitations are all courtesy of WME|IMG, The Miss Universe Organization's parent company. Summers also won the opportunity to compete at Miss Universe, which took place in Thailand last December, and she did.

The same all-inclusive prize package will likely be awarded to this year's winner.

According to an official press release, Summers is using the opportunities granted by her victory to encourage others "to have a healthy relationship with food and fitness" and is partnering with the National Eating Disorders Association to spread awareness. She also traveled to Mexico City with SmileTrain, a non-profit organization that supports cleft lip repair surgery for children, and visited Seacrest Studios in various children's hospitals. As a former Child Life Specialist, Summers wanted to ensure her campaign was dedicated to working with children as well.

Summers also said that her year as the reigning Miss USA changed her as a person — it helped her grow and mature, which could also be considered a reward.

"Sarah Rose as an emotional and spiritual and physical person I don’t think has changed much this year, but my grittiness and my thick skin has changed," she said, according to the Miss Universe site. "I still am the same joyful person, but I've learned how to take criticism now at a different level because, I mean I was in the spotlight literally overnight. I went from about 9,000 followers to 100,000 plus overnight after I won. So, that also means, the more the love, the more hate."

Her win gave her resilience and drive she didn't have before. "It's only strengthened me. I've learned that my identity can't come from anything other than who I know I am," she said. "And then on the days when that's really hard, you have to lean on your family and your friends. So, I've grown in that way to be able to ask for help and persevere through the icky stuff."

Based on Summers' personal account, winning Miss USA isn't all about the shiny things or embroidered sash. It's also about getting to know yourself as a person and being prepared to simultaneously face and change the world. So hopefully, whoever she crowns on May 2 is prepared for that responsibility.