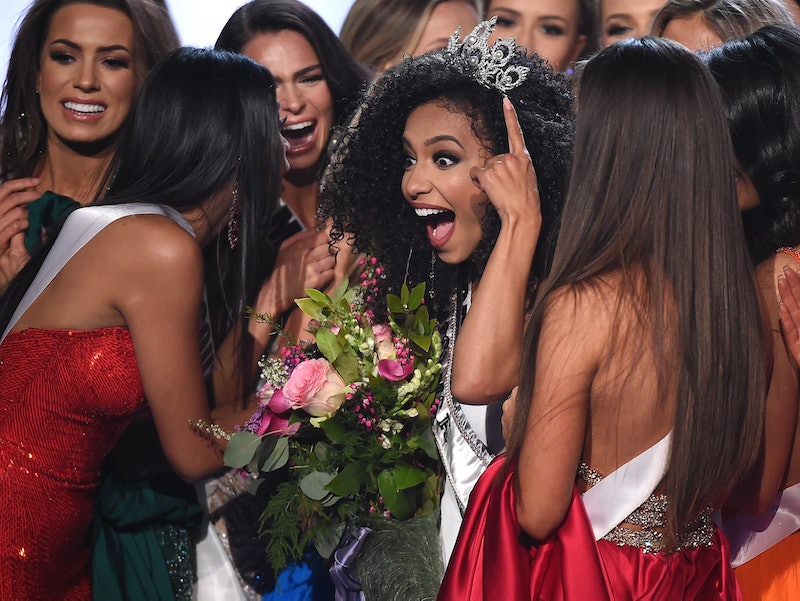 In an emotional and powerful moment, former pageant victor Sarah Rose Summers crowned Cheslie Kryst as the winner of Miss USA 2019. Formerly known as Miss North Carolina, Kryst stepped into the competition as an attorney specializing in complex civil litigation, and it showed in her flawless responses to the final two interview questions.

She claimed the victory ahead of runner-ups Miss New Mexico Alejandra Gonzalez and Miss Oklahoma Triana Browne at The Grand Theatre at Grand Sierra Resort in Reno Tahoe, Nevada.

After making it all the way to Miss USA and through the preliminary Miss USA competition, Kryst not only survived, but totally crushed the final rounds: a swimsuit runway, an effortless evening gown walk, and those delicate interviews.

Most of the questions — delivered by hosts Nick and Vanessa Lachey — were politically and socially-driven, which could've been difficult to answer. And they were for some, as a few stuttered through their responses or dodged answering the questions all together. But each of Kryst's replies were well thought out, meaningful, and poignant.

The first question she was given inquired about the #MeToo and #TimesUp movements. She was asked — point blank — if they were "too much." Kryst was just as prompt with her reply. She said that the movements "foster safe and inclusive workplaces in our country," which is what she strives for as an attorney. She thinks they're not over the top, but right on target.

During the final word round in which the final three wore headphones to mute one another's answers to the same question, each of them were asked, "What is one word you would use to describe your generation and why?"

It's a question that is easily answered with a prescribed reply, but Kryst's was beautifully layered. And of course, she didn't stutter once. "Innovative," she said. She mentioned the Nevada stage she stood on — a state in which the first-ever majority female legislature exists. "I look forward to continued progress with my generation," she said with confidence. She proved that she did her research.

As soon as her powerful answers left the stage, fans on social media ran with them. "North Carolina was on it, ALL NIGHT," @whitneynicjames on Twitter wrote. "Exuded confidence effortlessly, answered questions flawlessly."

It's going to be quite the year for Kryst. She's already a member of the litigation team at Poyner Spruill LLP. Not to mention, she runs White Collar Glam, a blog that's a product of her strictly three-suit journey at a law school competition, which taught her how to find affordable, fashionable attire fit for a badass lawyer.

Now, she has to prepare to be the face of the Miss USA organization, travel the country, attend charity events, and more. Not to mention, she has the opportunity to represent the United States in the Miss Universe pageant.

She said the folks back at her law office were having a watch party, so hopefully, they're OK with her taking some time off, because she's definitely going to be busy.