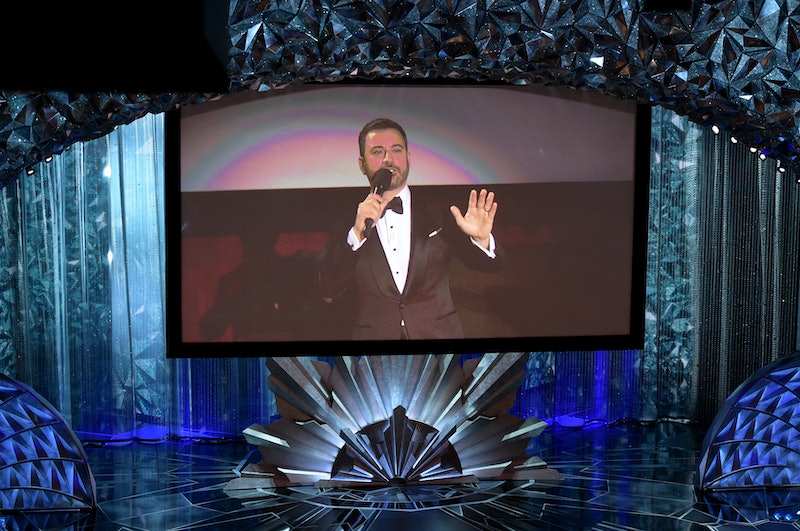 After initially selecting comedian Kevin Hart for the job, there will reportedly now be no 2019 Oscars host this year for the upcoming ceremony, according to Variety. The publication stated that individuals with knowledge of the Oscars plans said the show would be host-less, and that instead, a selection of celebrities would be selected to introduce segments and awards in lieu of a host. Bustle has reached out to The Academy for comment.

For a while, it seemed like it might be possible that Hart would end up being the Oscars host, after a back-and-forth situation in which he accepted the offer, then dropped the offer after homophobic tweets of his surfaced from the past. Following that, Hart went on the Ellen DeGeneres Show to speak with the comedian about the whole situation. During the interview, she expressed that she still hopes he considers taking on the gig.

After all of that, though, Hart has since confirmed that there's no chance he's hosting this year. On Good Morning America on Wednesday, Hart said, “I’m not hosting the Oscars this year." He didn't rule out a future hosting gig, though, adding, "It’s hard to predict what can happen.”

When Good Morning America host Michael Strahan pressed Hart on the details around the controversy, Hart repeatedly said that he was "over it," explaining, "There's no more conversation about it. I'm over that, I'm over the moment. I'm not giving no more explanation of who I am ... I'm just done. If you didn't [hear the apology], then I don't know what you're looking for."

Hart later spoke to Andy Cohen a little bit more about his experience on Jan. 9., arguing that his evolution in the last decade was evidence of his character. Via Deadline, he said,

The fight is about equality, in my understanding. And if that’s the fight — equal treatment — that means the only way to get there is to understand and accept the change that people have to make to get there...The dope thing about me is that there’s 10 years of change. Somehow, that was overlooked.

Many might have wondered whether the Academy would find another comedian to replace Hart. If there is no host, that will mark the second time in Oscars history that this is the case, according to W Magazine. The publication reports that the show will likely be shorter without a host, given that much of a host's job is found within the often lengthy monologues delivered between awards.

The change for the show, if the reports are correct, might be a welcome one: W Magazine also stated that only 26.5 million people tuned in to watch the 2018 Oscars, which marked an all-time low. As a result, some have suggested that there's less to lose by experimenting.

Media consultant Brad Adgate said to Variety, “Why not give [a host-less show] a shot? Things are so polarized anyway, any host that says anything will be analyzed to death." He added, "No host might be an experiment, and, let’s face it, the days of Bob Hope and Billy Crystal hosting are over."