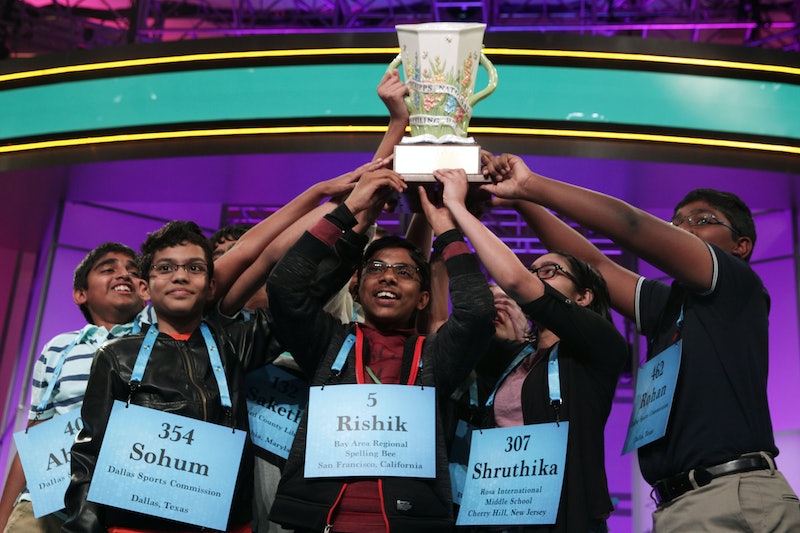 The trophy awarded to the winner of the country's most well-known annual spelling bee was hoisted in the air in victory on Thursday by not one, not three, not even five pairs of hands — but eight. In a historic first, eight adolescent contestants won the Scripps National Spelling Bee after organizers ran out of words to challenge them with.

After eight contestants aced a whopping 17 rounds of spelling challenges, the Bee's official pronouncer, 1980 Scripps National Spelling Bee Champ Jacques Bailly, told them there'd be a slight change to the program. Instead of continuing to spell until the field narrows to one champion, the Bee would name any contestant who spelled three more words correctly a champion.

"We do have plenty of words remaining in our list, but we'll soon run out of words that will challenge you," The New York Times reported Bailly told the eight contestants. "We’re throwing the dictionary at you. And so far, you are showing this dictionary who is boss."

In the end, after out-spelling 557 other competitors over the span of three days, all eight contestants spelled their three words correctly and were named co-champions in a historic eight-way tie. Together, they hoisted their shared trophy overhead as Bailly declared them "the most phenomenal assemblage of spellers in the history of this storied competition," according to NPR.

Get to know each of this year's eight Scripps National Spelling Bee Champions: