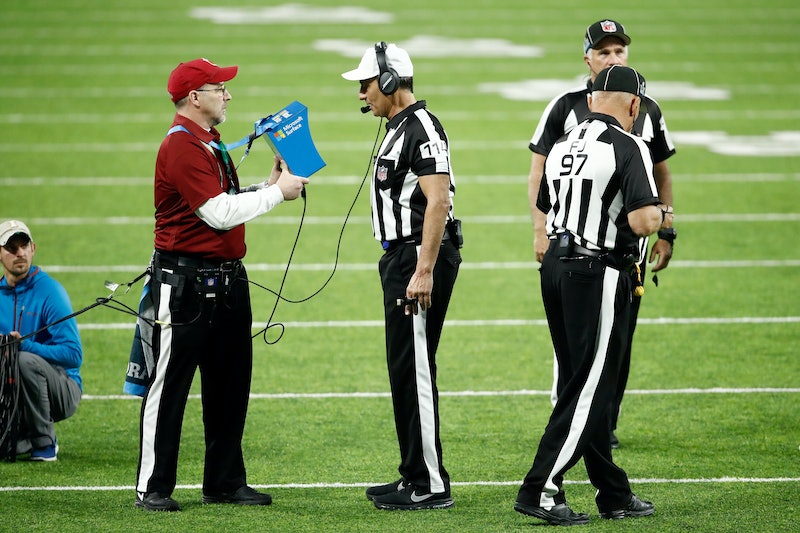 It's finally time for the biggest night of professional football: Super Bowl LIII. On that night, a veteran official will lead the team who decides the fate of the Los Angeles Rams and the New England Patriots.

The first thing to know is there is actually only one referee. The rest of the officiating team are called "officials." And the team will lead by referee John Parry, who has been an NFL official since the 2000 season, according to the Atlanta Journal Constitution. The newspaper also reported that Parry has officiated the Rams seven times — all wins. This will be Parry's third Super Bowl overall, according to CBS Sports.

The Super Bowl 53 officiating team is rounded out by Fred Bryan as umpire, Edgar Camp as down judge, Jeff Bergman as line judge, Steve Zimmer as field judge, Eugene Hall as side judge, and Terrence Miles as back judge, according to National Football League's Officiating Twitter account on Jan. 15. The NFL has put together a handy guide for football rules basics, if you need to brush up before the game.

CBS Sports's John Breech said Parry's 2018 season was "a solid season" but that the referee was "involved in one controversy" during a game between the Dallas Cowboys and Rams on Jan. 12. If you're interested in a rundown of Parry's calls during the 2018 season, website OddSharks has you covered. Pats Pulpit — the SB Nation team site for New England — called Parry "rather flag happy referee this season."

Breech wrote of the incident:

Parry was the referee during the Cowboys-Rams game and he baffled a lot of people at home when he blew a play dead near the end of the first half even though Dak Prescott hadn't been tackled. Instead of giving Prescott a chance to make a play, Parry blew his whistle, which meant the play ended with the Rams getting credited for an odd sack.

The call was derided by players and analysts, but Parry defended the move to reporters after the game. "From my view the quarterback's progress had stopped moving forward," Parry said after the game, according to NBC Sports. "There were hands around him and another defender was coming, so we went in the grasp to protect the quarterback." (There's video of the play itself, featuring Cowboys quarterback Dak Prescott.)

Super Bowl LIII will be played on Sunday at 6:30 p.m. ET on CBS with coverage beginning at 11:30 a.m. ET, according to The Washington Post. (There will be a Spanish-language game broadcast on ESPN Deportes, according to the newspaper.) And in case you're there for the music, Maroon 5 is taking care of the halftime show, along with Travis Scott and Big Boi.