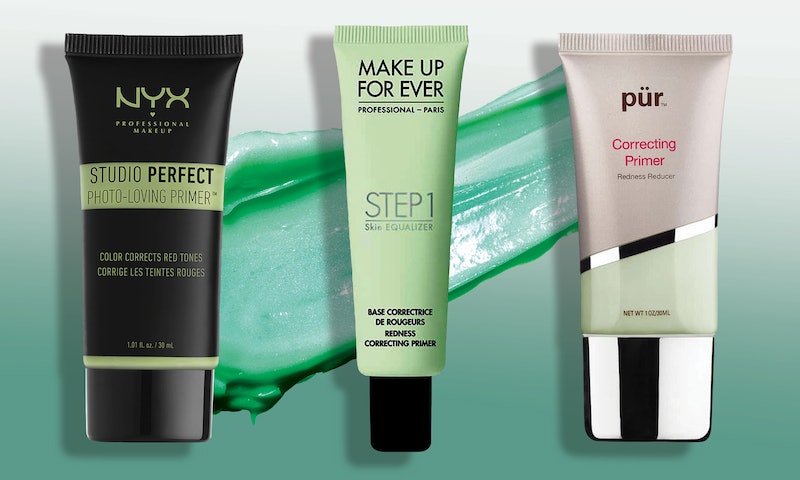 There are dozens of possible causes behind red skin: rosacea, dermatitis, the hot weather, acne ... the list goes on. And while there's certainly nothing wrong with it — in fact, it's quite common — some of us still might prefer to conceal it for certain occasions. One of the easiest ways to do this is by using a primer, since it's fast-acting and can also be used to help conceal more targeted redness, like inflamed pimples. The best color-correcting primers for redness will typically be tinted green, since green neutralizes red, being on the opposite sides of each other on the color wheel.

While darker skin tones are susceptible to rosacea and flushing too, redness typically shows up — or is at least much more visible — on lighter skin tones. If redness is an ongoing issue for you, consider trying an anti-redness moisturizer or serum, which you can use in conjunction with your primer. Keep in mind, if your redness appears to be severe, you should see a dermatologist in case it's the symptom of an underlying medical issue.

For just day-to-day, occasional redness, however, these three color-correcting primers will help keep it under control. Use them as the first step in your makeup routine, and follow up with foundation or tinted moisturizer, since they might appear too green to be worn on their own.

More like this
These Comfy Bras Under $25 Are Insanely Popular Because They Feel Like You Are Wearing Nothing At All
By Laura G.
The 15 Best Travel Cardigans To Stay Cozy & Chic En Route
By Andrea Gale Boerem
The 8 Best Strapless Bras For A Wedding Dress, According To An Expert
By Alexa Vazquez
Reviewers Can't Believe How Comfortable These Cheap Bras & Underwear On Amazon Are
By Andrea Gale Boerem and Alexa Vazquez
Get Even More From Bustle — Sign Up For The Newsletter