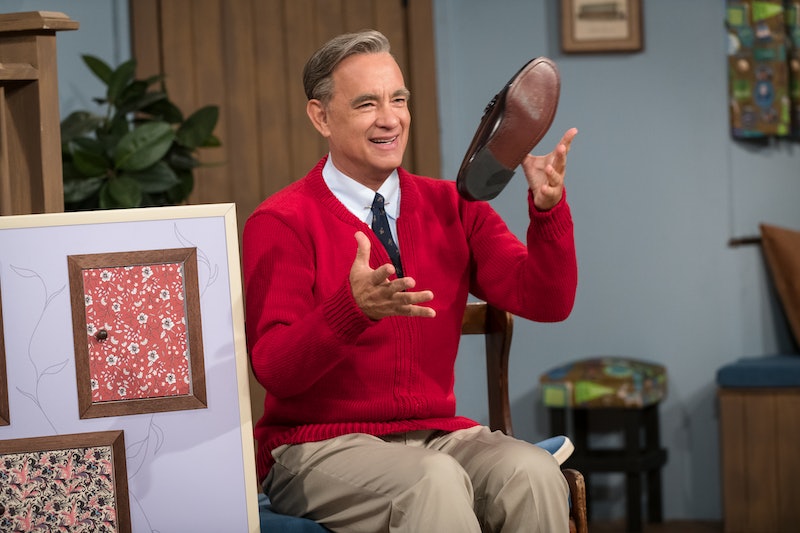 Mr. Rogers is back to teach us all about how to be neighborly, and how to rock a cardigan, in the first A Beautiful Day in the Neighborhood trailer. The trailer for the Mister Rogers movie was released on Monday, July 22, and it's pretty perfect in every way, in large part thanks to Tom Hanks' portrayal of the television show host and educator.

Hanks is, of course, another childhood favorite of, well, pretty much everybody who has ever seen one of his movies — be it Big (1988) or Toy Story (1995). And, thanks to his good-natured smile and friendly disposition, one might argue that he's as beloved and cherished as Mr. Rogers himself. In this first trailer for A Beautiful Day in the Neighborhood, Hanks uses every bit of that charm to become Fred Rogers, and it will make those who grew up watching Mister Rogers' Neighborhood feel right at home.

Before fans start thinking this is just another biopic, rest assured, it's not. The film, from director Marielle Heller, focuses on a very specific time in Mr. Rogers' life, when he was in the throws of Mr. Rogers' Neighborhood fame. As stated in the film's official synopsis, obtained via press release by Bustle, A Beautiful Day in the Neighborhood is "based on the true story of a real-life friendship between Fred Rogers and journalist Tom Junod." Matthew Rhys (The Americans) will play Tom Junod, a cynical young father who, in 1998, "is assigned a profile of Fred Rogers" and "overcomes his skepticism, learning about empathy, kindness, and decency from America's most beloved neighbor."

Hanks might make the perfect Mr. Rogers on screen, but it took some work, according to Heller. According to the director, Hanks' larger-than-life charm needed to be a bit toned down in order to play the much quieter Mr. Rogers. "He shakes everyone's hand, he's really funny, there's never an awkward moment when you're around Tom Hanks; Fred allowed for awkward moments," Heller said in an interview with Entertainment Weekly. "My challenge as a director was to get Tom Hanks to become less Tom Hanks," she explained. "To let discomfort and painful things sit; to not make everything feel OK. This will feel very different from how you've seen him before." In fact, in a separate interview as reported by Trib Live, Rogers' widow, Joanne Rogers, revealed that the very first question Hanks asked her when they met was, "Did Fred really talk that slowly?"

Another major hurdle to turn Hanks into Rogers was the clothes. Mr. Rogers was, of course, known for his wide array of sweaters — each one made by his mother — and, just as wardrobe was a major part of Mister Rogers' Neighborhood, it was too a major part of A Beautiful Day in the Neighborhood. "Every tie [Hanks] wears is a real tie of Fred's," Heller revealed to EW. "Joanne, his wife, gave us access to his closet and was like, 'Take this stuff, please! I don't know what to do with it!'"

It's safe to say that A Beautiful Day in the Neighborhood was made to be as close to Mister Rogers as possible. And that certainly comes off in the first trailer. The film doesn't come out until Thanksgiving — Nov. 22, to be exact — so fans have plenty of time to get their own cardigan-tennis shoe-tie combo ready. It's a beautiful day, indeed.