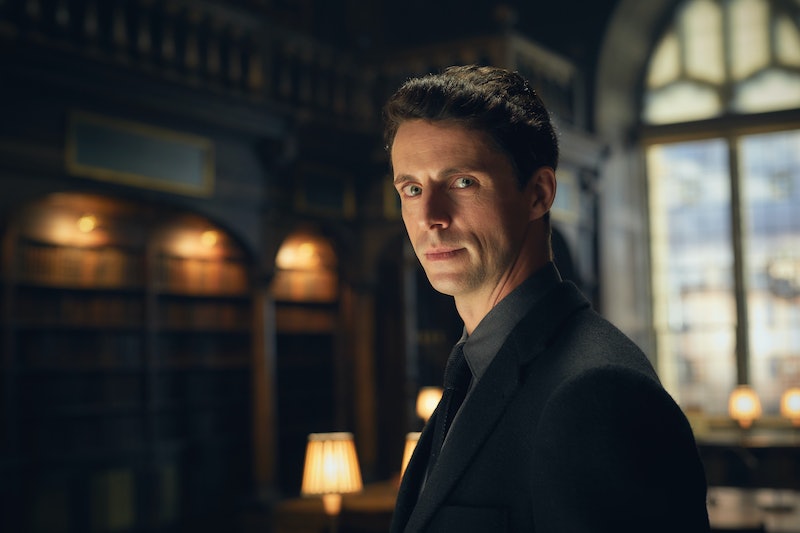 The first series of the historical-fantasy drama A Discovery Of Witches is currently well underway on Sky One, and audiences have been enjoying the story of historian Dr Diana Bishop (Theresa Palmer) and vampire Matthew Clairmont (Matthew Goode). But in case you weren't already aware, the series is actually a TV adaptation of the novel of the same name, and the A Discovery Of Witches book ending is almost certainly not what you were expecting.

The original novel, which is the first part of the All Souls book trilogy, was released in 2011 and was the debut novel by author, Deborah Harkness. The story follows historian Dr Diana Bishop, a professor of alchemy and science at Oxford who denies her identity as a witch. However, after discovering a manuscript inside Oxford's Bodleian Library, Bishop becomes entangled in a dangerous mystery and crosses paths with Professor Matthew Clairmont, who just so happens to be a vampire. Diana and Matthew both set out to discover more about their unusual identities, and due to some major events, the peace between humans, witches, vampires and daemons is put at risk, according to Digital Spy.

If, as the television adaptation continues it follows the same route as the book, A Discovery Of Witches viewers might be surprised at it's conclusion.

Some major spoilers are about to come your way — you have been warned.

According to an All Souls trilogy fan site, the story ends with Matthew and Diana time-walking back to Elizabethan England in 1590. Diana feels their new life calling to them from the past, and when the moment comes for the pair to time-walk, Matthew holds onto Diana tightly and steps alongside her into the unknown. After returning to their house, Diana's aunt Sarah Bishop, receives a book which indicates that the time-walking pair have made it safely to their destination. Sarah then burns the book in order to protect the secret of Diana and Matthew's location. After Sarah leaves, a ghost who resides in the house states that they will "remember the past, and await the future".

The ending perfectly sets up a sequel, which readers of the A Discovery Of Witches enjoyed with the follow ups Shadow of Night and The Book of Life, released in 2012 and 2014, respectively.

The first series of the show has gained a positive response from critics, and currently holds an outstanding 100 percent Rotten Tomatoes rating. One review from the Daily Telegraph states that "this fantasy drama is worth sticking with", whilst Euan Ferguson from the Observer praised the show's successful transition from book to television, he said "This reworking of Deborah Harkness' books is absolutely grand, as far as it goes".

You can catch weekly episodes of A Discovery Of Witches on Fridays at 9.00pm on Sky One, and NOW TV customers can watch on the platform's catch up service. No matter which way the television series decides to take this intriguing tale, I'm looking forward to seeing exactly how the first chapter of the trilogy is played out.