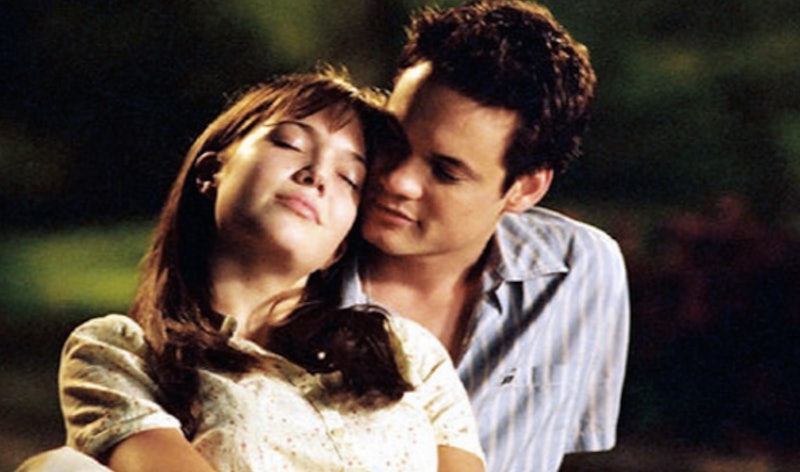 2017 marks the 15-year anniversary of A Walk To Remember's release, so it seems totally appropriate that the movie has been turned into a musical, which previewed on Jan. 31 at Prospect Theatre in Los Angeles. The 2002 movie had the greatest soundtrack, which included a lot of Mandy Moore, along with artists like Switchfoot, Rachael Lampa, and Toploader. As well as using most of the original soundtrack, the A Walk To Remember musical features classic '00s songs that will give you all of the feels.

Based on the novel by Nicholas Sparks, the movie version starred Moore and Shane West as star-crossed lovers who, spoiler alert, dealt with more than your average teenage couple. Moore famously played Jamie Sullivan, a young woman diagnosed with leukemia, who reluctantly fell in love with Landon, the bad boy at school. Their love was totally magical, so it makes sense that the story has been turned into a stage show.

Back in Oct. 2016, it was announced that Pretty Little Liars star Janel Parrish, who plays Mona Vanderwaal on the show, would be taking on the role made famous by Moore. Clips of Parrish performing as Jamie in A Walk To Remember prove what an incredible singer she is, and you'll definitely be hoping the new musical goes on tour soon.

"Wherever You Will Go" — The Calling

Although not in the original movie, it's no surprise that "Wherever You Will Go" was chosen for the musical version of A Walk To Remember, as it's one of the core love songs of the '00s.

"Dare You To Move" — Switchfoot

Switchfoot's music was central to the movie version of A Walk To Remember, and the video footage of Parrish's performance with her co-stars shows that the band's songs have been integrated in the best way.

Taken from Moore's third album, 2001's Mandy Moore, "Cry" was used on the movie's soundtrack and became synonymous with the film. Parrish's performance shows that an emotional monologue has been built into the musical's script during "Cry."

This New Radicals song was re-recorded by Moore and Switchfoot's lead singer Jon Foreman specifically for the A Walk To Remember soundtrack. The ensemble performance in the musical version sounds perfect.

Jamie's performance of "Only Hope" is one of the most important moments of A Walk To Remember. As part of the school play, it's when Landon realizes just how amazing Jamie really is, and Parrish's performance in the musical looked totally awesome. The song was originally recorded by Switchfoot, and covered by Moore for the film.

The cast and crew of the A Walk To Remember musical have hinted on Twitter that the show could return in the spring. And it was also announced that the cast recording will be released on Spotify, meaning that fans of Jamie and Landon will be able to sing along at home very soon.