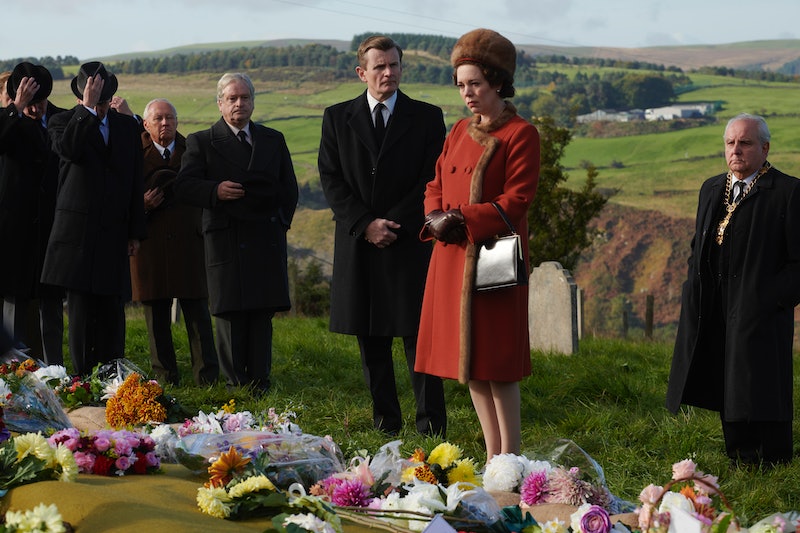 On Oct. 21, 1966, tragedy struck in the Welsh mining town of Aberfan. After heavy rainfall, a spoil tip suddenly slid downhill, causing a landslide that killed 144 people — 116 of whom were children. As depicted in The Crown's third season, this incident — known as the Aberfan disaster — remains Queen Elizabeth II's biggest regret.

This is, as the series shows, because of the way she responded in the aftermath. When the Queen (Olivia Colman) is informed of what happened in Aberfan, one of her right-hand men suggests that she visit the site of the disaster. However, she says that it's simply something queens don't do. Eventually, her husband Prince Philip (Tobias Menzies) goes to the Welsh town, but she continues to dig in her heels. When the Queen does finally travel to Aberfan, she's visibly nervous, and only later in the episode do viewers learn why.

She reveals to the new Prime Minister, Harold Wilson (Jason Watkins), that she has trouble expressing emotion. And as she's told while en route to Aberfan, "You may wish to consider that this is Wales, not England. A display of emotion would not just be considered appropriate — it's expected." During her visit, the Queen certainly appears red-eyed, dabbing her face with a handkerchief in front of reporters. But as she later confides in Wilson, she never shed a tear.

In reality, it's difficult to parse what the Queen's reasons were for her delayed visit without too much speculation. "We kept presenting the arguments, but nothing we said could persuade her," an advisor to the Queen is quoted as saying in Robert Lacey's 2002 book Monarch: The Life and Reign of Elizabeth II.

Lacey also paints a much different picture of the Queen's response than The Crown does. He writes that eight days after the Aberfan tragedy, she finally visited the Welsh mining town. According to him, "Rescue efforts had been abandoned by then, and her gaunt features, etched with grief, were more moving for being so clearly genuine."

Nonetheless, Queen Elizabeth does have regrets about how the disaster was handled — well, allegedly. According to the South Wales Echo, Royal Watcher Gyles Brandreth claimed that when he asked Lord Charteris what the Queen's biggest regret was, he responded, "Aberfan."

Since the disaster, Queen Elizabeth has made several more visits to the Welsh town — more than any other member of the royal family, as The Crown's end credits state. Per the BBC, she visited again in 1973 and 1997, returning for a fourth time in 2012 to open the Ynysowen Community Primary School.

Furthermore, many Aberfan residents seem to have a favorable view of the way things were handled. "We were still in shock, I remember the Queen walking through the mud," an unnamed mother told ITV in 2015. "It felt like she was with us from the beginning."

In October 2016, on the 50th anniversary of the tragedy, the Queen also sent Aberfan a personal message. "I well remember my own visit with Prince Philip after the disaster, and the posy I was given by a young girl, which bore the heart-breaking inscription 'From the remaining children of Aberfan,'" it read in part, per the royal family's website. "Since then, we have returned on several occasions and have always been deeply impressed by the remarkable fortitude, dignity, and indomitable spirit that characterises [sic] the people of this village and the surrounding valleys."