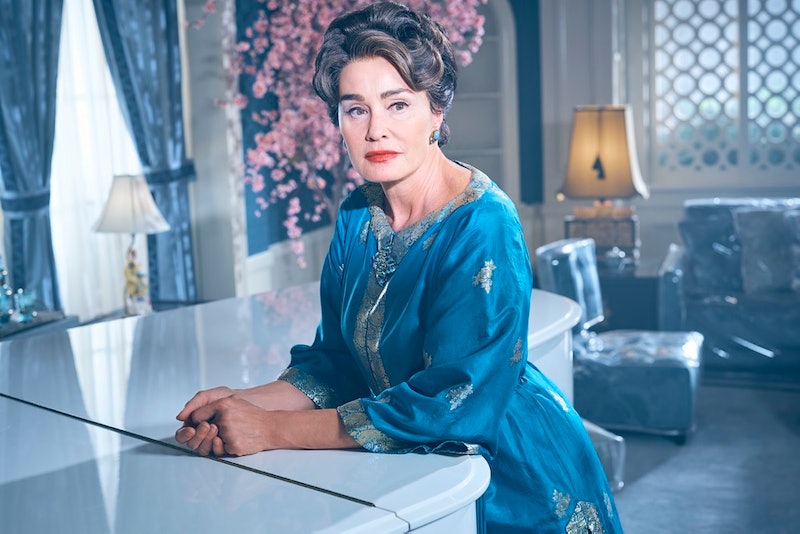 In FX's Feud, Joan Crawford (played by Jessica Lange) was a legendary actor trying to keep her career going in Hollywood. In her personal life, the real-life Crawford allegedly had an intense family life, according to the accusations in Mommie Dearest by Crawford's daughter Christina. The 1978 memoir claimed that the elder Crawford was allegedly an abusive parent, an alcoholic, a narcissist, and a controlling, violent person. Joan died in 1977 before the book was published, but Charlotte Chandler's 2008 biography Not The Girl Next Door alleged that the actor indeed knew about the book before her death, according to an excerpt printed in Vanity Fair.

“I think she’s using my name strictly to make money,” Joan said in 1976, according to the excerpt. “I think this book will be full of lies and twisted truths. I don’t think my adopted daughter is writing this book just to hurt me. If her purpose were to hurt me, she has already accomplished it without going to the trouble of writing a book."

According to Chandler's biography, Crawford's twin daughters also refuted the claims made in Christina's book. “We lived in the same house as Christina, but we didn’t live in the same home, because she had her own reality," Cathy Crawford said. "Cindy and I had a different reality — the opposite. I don’t know where she got her ideas. Our Mommie was the best mother anyone ever had.”

In 1940, Joan adopted an infant Christina, who was one of the actor's four kids, reported People. Despite the glamorous life she seemed to have, Christina wrote in Mommie Dearest that Joan allegedly physically and emotionally abused her on the regular, which included alleged strangulation, being locked in a closet, and being forced to address Joan as "Mommie Dearest" (hence the book title), according to The Washington Post.

"She grabbed for my throat like a mad dog," Christina claimed in the book, according to The Washington Post. “All I could think of was that my own mother was trying to kill me." Christina had also claimed to be “spanked so hard [Joan] broke hairbrushes, wooden hangers and yardsticks across my bottom,” and that her mother would allegedly go on drunken late-night "raids" looking to eliminate wire hangers from the house in Mommie Dearest, reported People. A New York Times review of the memoir stated that Joan allegedly called Christina "Joan Jr."

“She is her own person, and that person brought me a lot of pain," Joan said in Not The Girl Next Door, according to Vanity Fair. "I said this about Christopher [Crawford’s estranged adopted son] and now I say it about Christina. The problem was I adopted her, but she didn’t adopt me.”

According to The Washington Post, Christina said that she allegedly tried to ask for help. "I tried to tell people, but no one would believe me," Christina told the publication. "So who would have believed them? No one was ever able to intervene in such a way that it made a substantial difference in our lives."

Christina would go on to follow in her mother's footsteps and become an actor as well, starring in a soap opera called The Secret Storm. In Mommie Dearest, Christina wrote that after she had emergency surgery, she woke up to see that her 60-year-old mother playing the her role on the series — which was allegedly written for a 24 year old.

"It was my job she'd taken. What could she be thinking of when she did that?" Christina wrote in the book, according to The Washington Post. "She had become me for a while and I felt I was sinking into oblivion." Before Joan died, she had also commented on her connection to Christina in Not The Girl Next Door, according to Vanity Fair. “I’ve come to think that what she has wanted is to be me," Joan said in the book. "Or at least to have what I have. I wanted to share everything I had with her, but I couldn’t reach or influence her."

It will be interesting to see how FX's Feud dramatizes the relationship between Joan Crawford and her daughter Christina.

More like this
Here’s Everything You Need To Know About Operation London Bridge
By Bustle UK
Where Is Armie Hammer’s Ex-Wife Elizabeth Chambers Now After 'House Of Hammer'?
By Grace Wehniainen and Radhika Menon
'MAFS UK' Changed The Rules After Matt & Whitney Cheated On Their Partners
By Catharina Cheung
What Is A "Hot Girl Book" & Why Is Everyone Talking About Them?
By Samantha Leach
Get Even More From Bustle — Sign Up For The Newsletter