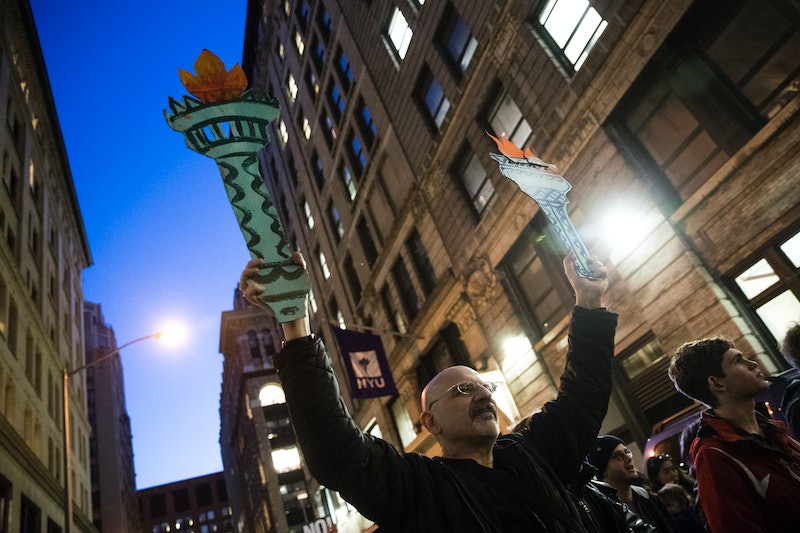 The American Civil Liberties Union has had quite a year so far, and we're only in March. Shortly after Donald Trump was sworn in, the ACLU sued the president on behalf of an Iraqi immigrant who was detained at John F. Kennedy International Airport in New York City under the executive order banning immigration from seven Muslim-majority countries. During the turbulent weekend following the travel ban, as protests mounted at airports around the country, the advocacy group saw a surge of donations. The legal advocacy group received more than $24 million, which was more than six times their usual annual haul. The group has stayed in the spotlight even after a court struck down the first executive order; even actress Sarah Paulson used her acceptance speech at the Screen Actors' Guild Awards to encourage people to donate.

The ACLU is now taking advantage of this enthusiasm to expand its efforts. On Saturday, they are launching People Power, a new arm of the organization to focus on efforts to fight the Trump agenda and other threats to civil liberties outside the courtroom through direct actions for grassroots activists. The organization has hired a staff of veterans from activist organizations, as well as the Bernie Sanders and Barack Obama presidential campaigns, to start up the organization.

"We are in the fight of our lives right now, and what we have learned since Donald Trump’s inauguration is that there is a growing army of people out there who want to be asked to do something big and important in response," Anthony D. Romero, the ACLU's Executive Director said in a press release. "We intend to activate these people to defend our Constitution, our shared American values and our future.”

"The airport protests were so instrumental in getting those decisions, because judges could see they were ruling on something that had captured the public imagination."

The group is expecting to energize activists in all 50 states in a variety of ways, including large-scale rallies as well as rapid-response actions for specific policies or measures.

The first action for the group is Saturday's launch, which comes with a training session held in Miami. It will be broadcast via live-stream to hundreds of locations around the country at 5 p.m. ET. According to the ACLU, more than 150,000 people around the country have signed up for the initial training, with over 2,300 launch events in all 50 states.

"We'll lay out a specific, concrete action plan on how people can get involved in their local communities," Faiz Shakir, the political director for the ACLU, tells Bustle. He sees the Trump administration as a direct threat to many of the values the ACLU holds dear — immigrant rights, freedom of the press, LGBT rights, protection from abuses by law enforcement — and sees this as a vital time for the organization to expand out of the courtroom and into the streets.

The protests in the wake of the travel ban serve as a model, says Shakir. "The airport protests were so instrumental in getting those decisions, because judges could see they were ruling on something that had captured the public imagination, and they had to something."

Specifically, hiring from the Bernie Sanders campaign is instrumental in the ACLU's plan to turn energy into action, according to Shakir. "Volunteers were the heart and soul of that campaign," he says. The hires come from the digital side, which means they can try to replicate the Sanders campaign's ability to turn social media communication into on-the-ground action and excitement.

"No fact sheet is going to defeat Donald Trump," says Shakir, pointing to the president's frequent association with "alternative facts." "It's important that all of us are working together, no matter what organization you're working with, that you be thinking about mass mobilization."

Ultimately, Shakir thinks mass mobilization, whether from donating to protesting, is key. "The crowds funded us," Shakir says, referring to the surge after the airport protests, and the continued (if, of course, smaller) donations since. "And the crowds will get something in return."