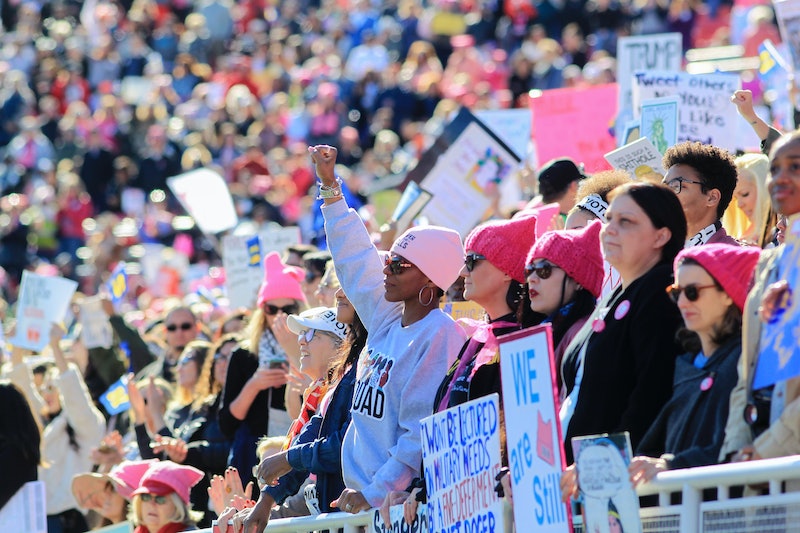 In June, Attorney General Jeff Sessions announced that domestic abuse and gang violence would no longer be considered grounds for asylum in the United States. This month, the ACLU fought back, announcing that they're suing Sessions in a challenge to that directive. This particular lawsuit, however, is just the beginning of the ACLU's vision for gender justice, a yearlong project targeting various forms of gender discrimination. For the next year, the civil liberties group will be highlighting one case every month related to gender inequality, all pertaining to a set of 12 "goals" laid out by the organization.

"Women's rights are under grave attack right now due to the Trump administration and there are also ongoing continuing problems affecting discrimination that have existed for decades," Lenora Lapidus, director of the Women's Rights Project, tells Bustle. "We thought that now is really an opportune moment for us to launch this concerted effort to showcase and keep the public's attention focused on all of the different ways in which gender discrimination persists."

Lapidus points out that the ACLU has been doing gender equality work for since its founding in 1920. In 1972, now-Supreme Court Justice Ruth Bader Ginsburg founded its Women's Rights Project, and she was successful in getting the high court to strike down laws that treated men and women differently and establishing constitutional protections under the 14th Amendment for gender equality.

While the election of Donald Trump has created "an urgency" to fighting for and protecting gender equality today, Lapidus says, not every case that the ACLU highlights in this yearlong project will be directed at the White House. Instead, it will confront a wide variety of gender issues. The project's 12 goals include health care, reproductive rights, educational opportunities, racism in the criminal justice system, pay equity at work, and voting rights, among other issues. There's also an emphasis on intersectionality, as equality issues are "often a combination of forms of discrimination."

It's not enough to just say there are problems and make the public aware.

That's partially why the ACLU chose to highlight the Sessions case to kick off the project: It showcases how gender discrimination interacts with immigration issues. "The fact that this form of limiting immigration is based on this notion that domestic violation somehow doesn't rise to the same level of persecution shows both this administration's harmful policies towards immigrants in general as well as harmful policies towards women," Lapidus says.

The other cases the project highlights will be revealed on a month-by-month basis. Overall, the ACLU hopes to take the momentum of feminist activism — as seen by the Women's March, #MeToo, and Time's Up — and put it into action, both by informing the public about the specific issues at hand and by making change with the cases themselves.

"The '70s did not eradicate sex discrimination," Lapidus says, looking back on the successes of the Women's Rights Project. "So here we are nearly half a century later, and still women are paid only on average 80 cents on every dollar that a man is paid, women suffer from gender-based violence at the hands of partners as well as police officers, women are the fastest growing population of incarcerated people, and the list goes on."

With that, Lapidus says, "It's not enough to just say there are problems and make the public aware; we are pledging that we will take action, we will use all the tools at our disposal to actually confront and eradicate those forms of discrimination."