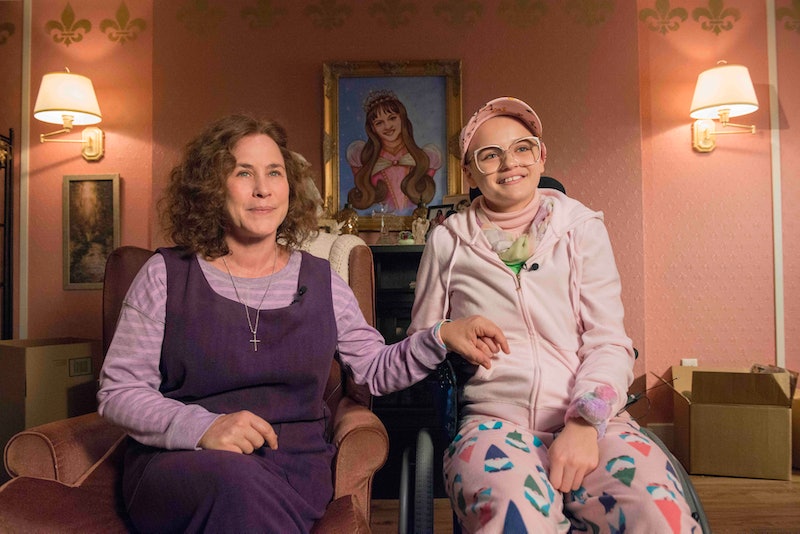 As anyone who's followed Gypsy Rose Blanchard's case will know, The Act is based on a true story filled with disturbing twists and turns. It's been covered before in documentaries like HBO's Mommy Dead and Dearest and Investigation Discovery's Gypsy's Revenge. But the scripted show, which debuts Wednesday March 20, approaches it from a different angle, dramatizing the story with actors including Patricia Arquette (Dee Dee Blanchard), Chloe Sevigny (Mel), and The Kissing Booth's Joey King (Gypsy Rose). The series fictionalizes some aspects, but it's based on real events, so here's everything you need to know before watching — whether you need a refresher or are just now catching up.

As reported by People, Gypsy is serving out a 10-year prison sentence after pleading guilty to second-degree murder in the 2015 stabbing death of her mother, Dee Dee Blanchard. However, this wasn't a simple case of a mother-daughter relationship gone sour. As Gypsy explained to ABC News, she was raised to believe she suffered from leukemia, muscular dystrophy, vision and hearing impairments, and seizures. among other ailments. She also used a wheelchair to get around, and a a feeding tube for nutrition and medicine.

According to BuzzFeed, this earned her and Dee Dee continued attention in the press, as well as free flights from a volunteer pilots organization, stays at a lodge for cancer patients, and free trips to Disney World through various charity organizations. However, it was later revealed that Gypsy was actually healthy, and per Rolling Stone, experts now believe Dee Dee had Munchausen syndrome by proxy, "a mental disorder in which a parent or other caretaker exaggerates, fabricates, or induces illness in another person for attention and sympathy."

Gypsy further explained to ABC that as she got older, she started to disobey her mother and wonder about life outside of the home they shared. One time, after a failed attempt to run away, she claimed Dee Dee even physically restrained her. "She physically chained me to the bed and put bells on the doors and told … anybody that I probably would've trusted that I was going through a phase and to tell her if I was doing anything behind her back," Gypsy said.

Eventually, Gypsy began a secret online relationship with a man named Nicholas Godejohn, which she said her mother didn't like. "She got jealous, because I was spending a little too much attention on him, and she had ordered me to stay away from him. And needless to say, that was a very long argument that lasted a couple weeks," Gypsy continued to ABC.

Then, on June 14, 2015, a status reading "that bitch is dead" was posted to the Facebook page Dee Dee and Gypsy shared, the Washington Post reported. Concerned neighbors called the police, who found Dee Dee stabbed to death in her bed, per the Springfield News-Leader.

Gypsy told ABC that on the night of the murder, she hid in the bathroom while Godejohn — who was convicted in November and sentenced to life in prison in February — carried out the attack. She and Godejohn then skipped town. "It would come in times of happiness, little spurts of happiness, but I would have breakdowns or I'd start crying, feeling remorse, guilt, and at the same time, also missing her at the same time, worry about what, what I'd just done. She's gone," Gypsy said of how she felt afterward.

However, since going to prison, Gypsy is "thriving," Gypsy's stepmother told the News-Leader in February 2018, adding that she's working toward her GED. "Despite everything, she still tells me that she's happier now than with her mom. And that if she had a choice to either be in jail, or back with her mom, she would rather be in jail."

Those are the basics of Gypsy's case, but even if you already know how the story will end, The Act should make for a captivating watch. It's a case that has fascinated the public for years, and it will be interesting to see how Hulu approaches the story.