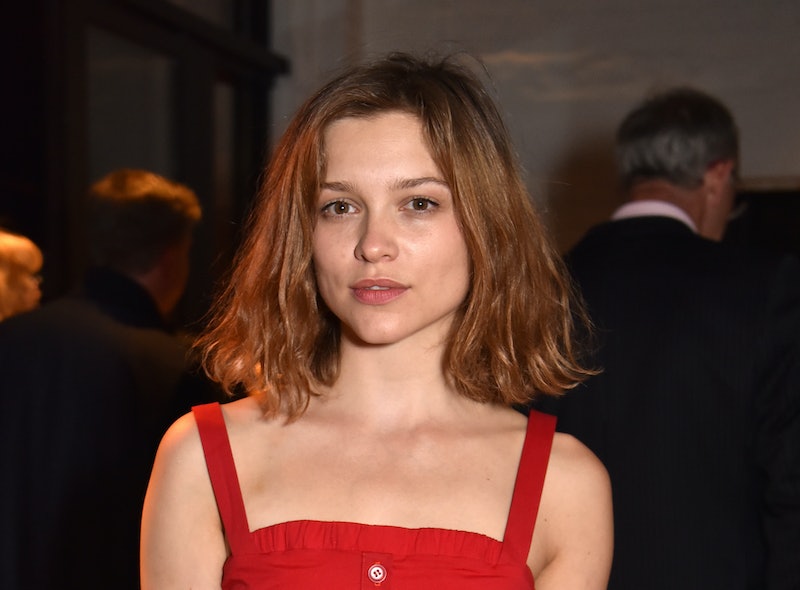 Christmas TV is always the absolute best, with old classics and new dramas alike playing non stop. And this year, one of the TV highlights I'm most looking forward to is BBC's The Trial of Christine Keeler, which stars the likes of James Norton, Emilia Fox, Ben Miles, and Sophie Cookson. But who is Sophie Cookson? Here's a quick run down of everything you need to know about the rising star.

Cookson impressively attended the Oxford School of Drama, where she said she studied "so much Shakespeare," while there. The English actress is 27 years old, but she's already had an impressive acting career since leaving University. While you may perhaps recognise her best from the Kingsman movies, where she starred as secret agent Roxy Morton alongside the likes of Colin Firth, her first major project was in The Huntsman: Winter's War, where she starred as Pippa, an archer and hunstman. The film also starred A-listers including Charlize Theron, Chris Hemsworth, and Emily Blunt.

Another place you may recognise her from is Netflix, where she played Sidney in TV series Gypsy, a show about a therapist who becomes too immersed in the lives of her clients. Gypsy also starred Naomi Watts and Billy Crudup.

So she's nailed the big screen and the world of Netflix, but what about the stage? Yep, she's done that too. Back in 2017, Cookson told Interview magazine that she'd "absolutely love to do theatre," and shortly later, she appeared in Killer Joe at the Trafalgar Studios, opposite none other than Orlando Bloom himself.

In summary, she's pretty much killing it in her career, and this Christmas, you'll see her star as the lead character in BBC's The Trial of Christine Keeler. The show is based on the Profumo Affair, which saw a 19-year-old Keeler have a brief sexual affair with a government minister, as well as allegedly being involved with Captain Yevgeny Ivanov, a Soviet naval attaché. What followed was fear of a security risk in the peak of the Cold War era, some public trials, and the fall of the Conservative government. It was one of the most scandalous events of the '60s in the country.

Speaking about her latest role, Cookson said that the story was “an illuminating script about a vivid, complex woman who has previously, it seems, been reduced and misunderstood,” adding: “Now feels like the perfect time to reconsider her life, and redress the balance.”

The Trial Of Christine Keeler will show in two parts, beginning on Sunday 29 December at 9pm on BBC One, and concluding with the second episode on Monday 30 December at 9 p.m.

More like this
Adam Ali Hopes 'Waterloo Road' Will “Subvert” Queer Misconceptions
By Sam Ramsden
Rita Ora Finally Opened Up About Marrying Taika Waititi & Their "Perfect" Wedding
By Sophie McEvoy and Catharina Cheung
Jemima Khan Used Her Own Life As Inspo For 'What’s Love Got To Do With It?'
By Darshita Goyal
Gerard Butler Insisted On Adding This Pivotal Scene To 'Plane'
By Catharina Cheung
Get The Very Best Of Bustle/UK
Sign up for Bustle UK's twice-weekly newsletter, featuring the latest must-watch TV, moving personal stories, and expert advice on the hottest viral buys.