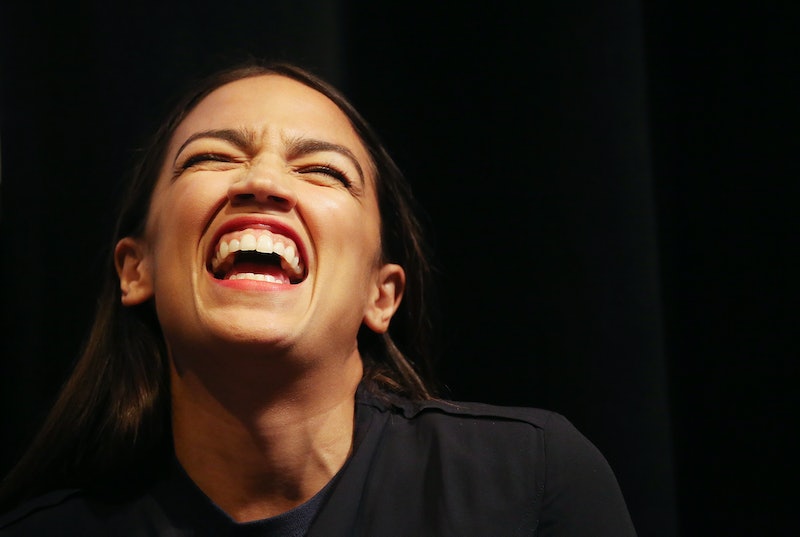 Conservatives' attempt to smear Rep. Alexandria Ocasio-Cortez's dancing continues to backfire, and it's now become something much bigger. If her original Breakfast Club spoof wasn't enough to satisfy you, there's now an entire Twitter account devoted to dubbing over Ocasio-Cortez's dance with various music hits.

The account is called "AOC Dances To Every Song" and is run by a woman named Valentina (@leftistthot420), who declines to give her last name for privacy reasons. She describes herself as a huge Ocasio-Cortez supporter. "Love her to death," Valentina tells Bustle. "Big fan of her politics. ... I have been following her since the beginning."

On Thursday, an Ocasio-Cortez opponent resurfaced a video that she'd filmed in college with a group of Boston University students in imitation of the famous Breakfast Club dance scene. (Incidentally, Molly Ringwald and Ally Sheedy — two actresses from the film — praised the parody and tweeted that Ocasio-Cortez is now "in" the club.)

"Here is America's favorite commie know-it-all acting like the clueless nitwit she is," the user wrote in a tweet that's now been deleted. Far from encouraging people to make fun of Ocasio-Cortez, though, the video seems to have just made people like her more. And it also inspired Valentina.

"I said something along the lines of, 'Oh, in 24 hours there's going to be an account with 10k followers of AOC dancing to every song,'" Valentina says, adding that she then she realized that she could easily make that account herself. By late Thursday night, she'd posted the first dubbed-over video (Initial D's "Deja Vu"), and has tweeted out a flood of additional clips since then.

Valentina expected the account to go viral — "I can sniff out a trend," she says — but she's been helping along the process by choosing songs that are "real clickable."

"I did the Neon Genesis Evangelion theme, I did Darude's 'Sandstorm,' 'Let The Bodies Hit The Floor,' stuff like that," she says. Her favorite so far is ABBA's "Gimme! Gimme! Gimme!"

It's been said that memes and other forms of shared humor are helping people cope in the Trump era. When asked whether she thinks her videos could have a motivational effect, Valentina says, "I hope so. I really do. I have spent enough weekends campaigning for Democratic candidates in my area that, if it inspires someone to go out and do it, that'd be great."

That's not why Valentina originally started the account, though. "I just like being popular," she jokes. "I guess I didn't get it enough in high school."

Ocasio-Cortez is aware that her years-old video has gone viral and been bashed by some conservative pundits. "It is unsurprising to me that Republicans would think having fun should be disqualifying," she told The Hill on Friday. She also tweeted out a brand-new clip of her dancing by her congressional office.

As of Friday afternoon, there's no sign yet that Ocasio-Cortez knows about the "AOC Dances To Every Song" account. But Valentina hopes she finds out.

More like this
Why TikTok Is Flooded With Controversial Videos About "Pick Me Girls"
By Courtney Young
This TikTok Song About An Unrequited Romance Has FYPs In Shambles
By Emma Carey
On TikTok, "Cbat" Has Been Named The Worst Sex Song Ever
By Lexi Inks
Camilla Paid Tribute To The Queen In A Heartfelt Video Message
By El Hunt and Sam Ramsden
Get Even More From Bustle — Sign Up For The Newsletter