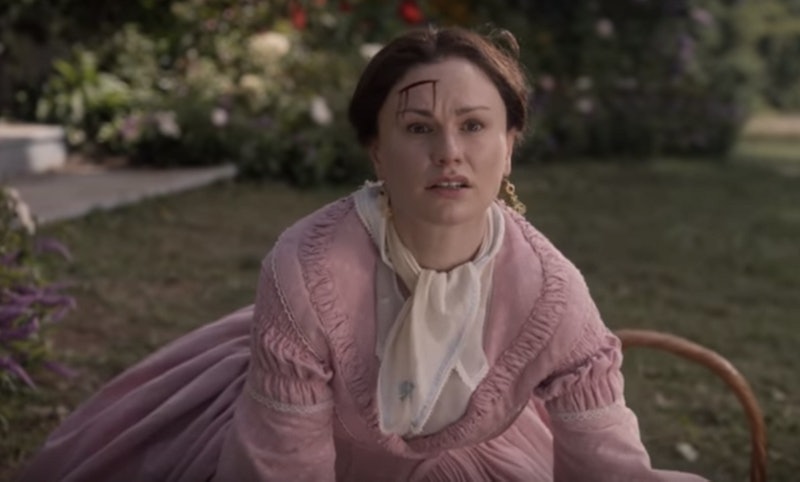 If you're still pining for the return of The Handmaids Tale in 2018, then a new Margaret Atwood adaption on Netflix may be just what you need to take the edge off. The trailer for Alias Grace was released on Friday, and from the looks of things, it has just as much horror, intrigue, and subtle political subtext to keep you occupied until we can check back in with Offred again. Being released as a six-part miniseries on the streaming service on Nov. 3, Alias Grace is a psychological thriller with a historical edge.

Directed by Mary Herron (American Psycho), and starring Sarah Gadan, Anna Paquin, and Zachary Levi, Alias Grace is based on the true story of Grace Marks. A poor, Irish immigrant working as a domestic servant in Upper Canada, Marks was convicted of the brutal murders of her employer, Thomas Kinnear, and his housekeeper, Nancy Montgomery, in 1843. James McDermott, a stable hand of the estate, was sentenced alongside her.

While McDermott was hanged for the crime, according to The New York Times, Marks was sentenced to life imprisonment and became one of the most notorious women of the time. Her conviction was also controversial and the topic of much debate, as people questioned whether Marks was actually involved in the murder, or was merely an unwitting accessory to it. After 30 years of imprisonment, Marks was exonerated, according to The Hollywood Reporter. And, as hinted at by the new trailer, the case was definitely a complicated one on multiple levels.

Fans of Atwood's writing will already be aware that her work is often full of thoughtful political subtext, and Alias Grace is no exception. Many of the most troubling aspects of the case, for instance — and the ones which provoked the most debate regarding Marks' potential innocence — revolved around the allure of beauty and scandal, and the assumed role of the lower classes. In the afterword of Alias Grace, Atwood wrote,

"The details were sensational: Grace Marks was uncommonly pretty and also extremely young; Kinnear's housekeeper, Nancy Montgomery, had previously given birth to an illegitimate child and was Thomas Kinnear's mistress; at her autopsy she was found to be pregnant. Grace and her fellow servant James McDermott had run away to the United States together and were assumed by the press to be lovers. The combination of sex, violence and the deplorable insubordination of the lower classes was most attractive to the journalists of the day."

Like The Handmaids Tale, some of the aspects of the Alias Grace story disturbingly resonate within our own current culture and society. You can see cadences of similar behavior, for instance, in the media furor surrounding Amanda Knox's murder trial, in which Knox's beauty and sexuality became as much of a talking point as the allegations against her. And being able to register those details within our own modern society make the novel of Alias Grace a distinctly thrilling yet disquieting read.

From the looks of the trailer, this adaptation of the book appears as though it may be offering just as much thoughtful commentary, both in a historical and contemporary context, as it does a gripping, tense story. And it's likely to get fans just as fired up as The Handmaid's Tale did.