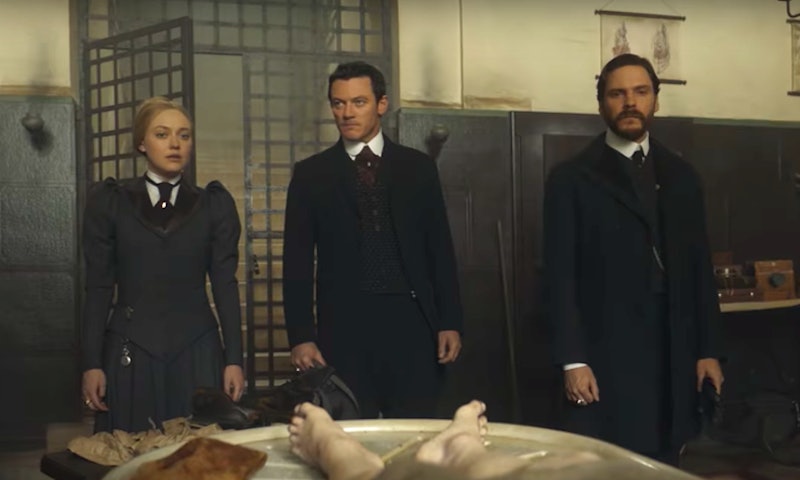 A mysterious new TV series poses the daunting question: "What compels a man to do evil?" TNT's recently released The Alienist trailer looks so chilling, and it makes the series already seem compelling for reasons that every crime show fan will love. Set in the 1890s, the show centers a criminal psychologist who joins forces with a journalist and police detective to find a "child killer" linked to the continuous murders of boy prostitutes, according to IndieWire. The series gives a window into the early days of criminal psychology and the historically inspired fiction looks as fascinating as it is eerie. Not to mention it has an all-star cast, including Daniel Brühl, Luke Evans, and Dakota Fanning.

According to Entertainment Weekly, the show is based on a series of novels by Caleb Carr, the first of which was published in 1994. Carr's series is a hybrid of a mystery, historic, and detective story, spotlighting the early days of psychology when terms like serial killer and psychopath were still new. While the book isn't an exact retelling of history, it includes appearances by prominent historical figures like Theodore Roosevelt and J.P. Morgan as they search for answers from murders using fingerprinting and psychology.

By the looks of the new Alienist trailer, the series will capture that same sense of mind-boggling history while giving viewers so many thrills along the way.

The trailer's chilling aesthetics include dimly lit rooms and images of dead bodies against the sounds of kids' innocent giggles and and creepy piano notes. The detailed costumes and sets are like a time warp to the old-timey era that's impossible to look away from. And although the show doesn't premiere until January, fans are eager to watch given the teasers they've seen so far.

It's no wonder the trailer itself is so intriguing and promising to fans of other really solid crime series out there. The mastermind behind the acclaimed HBO anthology True Detective, Cary Fukunaga, is the creator of this series as well, according to Indiewire. Fukunaga will write the series along with Hossein Amini, who wrote the 2011 crime film Drive starring Ryan Gosling. The Alienist's team also includes James Hawes, who's directed Netflix's wildly popular dystopian anthology Black Mirror, and David Petrarca, who's directed Game of Thrones, The Man in the High Castle, and Jessica Jones. Fans who know and love their work will hopefully recognize similar approaches in Alienist.

In addition to a totally seasoned creative team, the cast is made up of fantastic (and familiar) actors. Lead actor Daniel Brühl stars as criminal psychologist Laszlo Kreizler. Brühl has been in films like Inglourious Basterds (2009) and Rush (2013), and is reportedly part of the upcoming Cloverfield movie. Alongside Brühl is Luke Evans, who plays a journalist helping him investigate the murders. Evans was most recently in this year's Beauty and the Beast as well as Girl on the Train (2016) and Dracula Untold (2014). The last member of the dynamic trio is Dakota Fanning (The Twighlight Saga, I Am Sam, War of the Worlds), who plays a police detective.

The psychological element to the story is one fans will likely really be excited about. Themes surrounding and understanding murder are still prevalent and fascinating today (hence the success of Serial, Mindhunter, and Making a Murderer). "Sometimes society looks upon people as crazy. It may only mean that they're alienated from their own true natures," Brühl's character says in another trailer.

Going back to the 1890s and watching these people try to understand and make sense of murderers and mental illness will be captivating. Knowing murderers protrude from one generation to the next and trying to understand their motives is a timeless notion that also makes for great TV.

More like this
12 Documentaries & Films About Cults From Netflix UK To Hook You From Start To Finish
By Kay Leong
Where Is Oscar Torres In 'Only Murders In The Building' Season 2?
By El Hunt
Yinka Bokinni Recalls Terrifying Truth At Heart Of 'How To Hire A Hitman'
By Frances Stewart
'Sherwood’s Filming Locations Hold Deeper Meaning
By Rachel Mantock
Get Even More From Bustle — Sign Up For The Newsletter